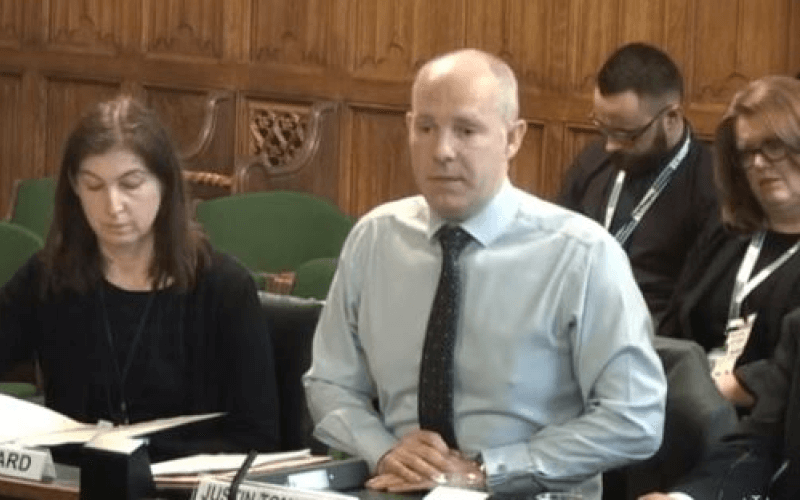 Disabled activists have responded with resignation after the government appointed another “shoddy, shameless” minister for disabled people.

The new minister, Justin Tomlinson, previously held the post between May 2015 and July 2016, before he was sacked in a government reshuffle.

Now he has been appointed again, this time to replace Brexit casualty Sarah Newton, and becomes the eighth minister for disabled people – or the seventh if you only count him once – since 2010.

There had been a gap of more than three weeks – filled with increasing anger at the prime minister’s failure to appoint a replacement for Newton – before Tomlinson’s name was finally revealed.

Despite repeated requests from Disability News Service (DNS), the Department for Work and Pensions (DWP) has failed to produce a press release welcoming his appointment.

Disabled activists this week pointed to Tomlinson being repeatedly publicly shamed for his ministerial performance and activities as an MP.

In October 2016, he had to apologise to MPs and was suspended from the Commons for two days after leaking a confidential Commons report to payday lender Wonga.

Last November, having been restored to DWP as the family support, housing and child maintenance minister, he suggested to a Commons committee that families hit by his government’s benefit cap could cope by taking in a lodger or “renegotiating” their rent.

And only last week, Tomlinson blocked DNS on Twitter, following a report on how he had apparently lied to the Commons work and pensions committee about the impact of the benefits freeze on disabled people (pictured).

When asked this week why he had taken that action, he said DNS was “free to be critical and challenging, but using phrases like ‘lying’ goes too far”, although he did remove the block.

But he has yet to explain why he told the committee that “disability benefits were exempt from the benefits freeze”, when in fact there is no exemption for the main component of employment and support allowance (ESA) or the top-up paid to those in the ESA work-related activity group.

Last week he was also forced to apologise to MPs for making a series of “inadvertent errors” in a debate about the annual uprating of benefits.

Tomlinson’s record as minister for disabled people in 2015 and 2016 is filled with a string of episodes that cast doubt on his credibility.

The former nightclub manager and owner of a marketing company had been in charge of the government’s much-criticised Disability Confident scheme for more than a year when DNS revealed in June 2016 that only about 40 mainstream private sector employers had signed up to the flagship programme in the three years since its launch.

The same month, he was urged to resign after he threatened a traumatised child abuse survivor – who was waiting to give evidence about the abuse in court – that his benefits would be stopped if he failed to co-operate with an Atos benefit reassessment.

Also in June 2016, he admitted to complete ignorance about the model that lies at the heart of his government’s programme of disability benefit reforms, the biopsychosocial model of disability.

Later that year, in a Commons debate after his sacking, he admitted that he had forgotten that DWP had issued a press release in his name that set a target to halve the disability employment gap by 2020.

And in July 2015, soon after his appointment as minister for disabled people, he risked ridicule after announcing that Swansea had become the country’s first “Disability Confident City”, but was then unable to explain why it had been chosen.

Denise McKenna, co-founder of the Mental Health Resistance Network, said Tomlinson had previously been “thoroughly dismissive” of disabled people and was “an apologist for the worst of the Tory policies”.

She said: “We have no expectation that Justin Tomlinson has in any way changed. We expect more of the same from him.”

She added: “Disabled people no longer bother to meet with Tory disability ministers because they don’t have our interests at heart.

“His integrity is highly questionable. We have no reason to believe that he will have changed his ways. We expect more of the same from him.”

Bob Ellard, a member of the national steering group of Disabled People Against Cuts, said: “Eight ministers for disabled people in nine years. Frankly, by now disabled people care almost as little who their minister is, as the minister couldn’t care less about disabled people.

“None of these shoddy, shameless ministers has ever lifted a finger to improve the lives of disabled people. And under this government, none of them are likely to.”

John McArdle, co-founder of Black Triangle, said Tomlinson was “clearly too incompetent” to serve as a minister.

And Ian Jones, from the WOWcampaign, said that one of Tomlinson’s excuses in 2016 for defending huge cuts to disabled people’s support had been that resources would instead be targeted at those who needed it most.

He said: “This time he must do better and I am praying that he has had an empathy implant.”