You are here: Home / Activism and Campaigning / Activist’s book takes aim at charities ‘who facilitated war on disabled people’ 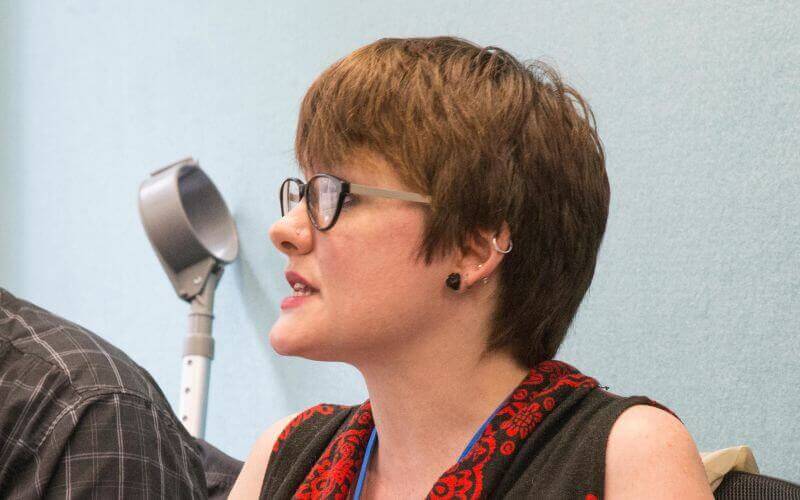 A new book by a leading disabled activist has accused disability charities of being more interested in their own survival than in defending disabled people from a decade of cuts and oppression.

In The War on Disabled People*, published next week, Ellen Clifford accuses charities of “actively facilitating the Tories’ war on disabled people”.

In the book, Clifford (pictured) seeks to write the history of a “pivotal” moment in the history of the disabled people’s movement – the decade since the election of the Tory-Lib Dem coalition in May 2010 – from the perspective of a disabled activist.

It was a decade, she says, when the UK government “went to war on disabled people”.

But rather than fighting against those governments, the disability charities that claim to represent disabled people have instead provided cover for successive Tory-led governments to make savage cuts to their support, she says.

She particularly targets the big disability charities such as Mencap, Leonard Cheshire, Scope and Mind, which – in 2017-18 – had a combined annual turnover of nearly £500 million, and where “outspoken criticism of the government is avoided in favour of opportunities to work in partnership”.

Clifford has been a key figure in the success of the grassroots group Disabled People Against Cuts (DPAC), which she argues helped push disabled activists to the forefront of the anti-austerity movement.

Clifford says: “The fact that charities continue to work with the govern­ment encourages a belief that everything is essentially OK.

“This is based on a failure to appreciate that the bottom line for these charities is not to do with the treatment of disabled people but their own organisational interests.”

Ultimately, she says, “corporatised charities are invested in maintaining the status quo as opposed to the full transformation of society that is required to free disabled people from oppression”.

Quoting the late Debbie Jolly, co-founder of DPAC, she says the con­tinued existence of the charities “demands that disabled people are oppressed, vilified and subjugated”.

She is also critical of the Time to Change mental health campaign which – with support from politicians such as David Cameron and Nick Clegg – she said mainly provided cover for politicians to make “savage cuts to mental health services”.

Another initiative she criticises is the “Purple Pound” initiative, which aims to persuade business of the profits they will reap by welcoming disabled people into inclusive and accessible shops, restaurants, pubs and clubs.

Clifford argues that “by far the most accessible premises on the high street are those belonging to businesses targeted at people on low incomes” such as pound shops, chains such as J D Wetherspoon, and betting shops.

She says: “They would seem to understand the disability demographic far better than disability organisations frantic to prove that there is a valued place for disabled people within capitalism.”

The last decade, says Clifford, has seen a return to grassroots activism, following a decline in the disabled people’s movement from the mid-1990s.

She points out that the successes that have been won have not just been through the direct action through which DPAC made its name, but also from research, lobbying and legal challenges.

There was also – probably DPAC’s greatest success – the triggering of an unprecedented inquiry by the United Nations which led to the conclusion that the UK government was guilty of “grave and systematic violations” of the UN Convention on the Rights of Persons with Disabilities.

As well as writing her book from the viewpoint of a disabled activist, Clifford writes from a determinedly left-wing, anti-capitalist viewpoint.

She sets the scene for the last decade by describing some of the discrimination and exclusion, hostility and oppression that disabled people have faced over the last couple of centuries, and links that to the rise of capitalism over the same period.

She also describes how disabled people have been targeted through welfare reform and cuts to social care under successive Tory-led governments.

Clifford describes the impact of those cuts and reforms, both in terms of the human costs of rising poverty, benefit-related deaths and psychological harm, and the wider social impact on disabled people, such as re-segregation, institutionalisation and hate crime.

She says the key lesson of the 2019 general election – which led to a huge majority for a right-wing Tory government – is that “we cannot defer our fightback to the ballot box and the promise of a future change of government.

“We need to lead with grassroots resistance.”

There is also a detailed account of how DPAC led the resistance to cuts that have targeted disabled people.

She quotes fellow DPAC steering group member Andy Greene, who said: “From demos outside buildings to blocking roads, to taking the fight to government members’ front doorsteps and then onto occupying their depart­ments, to assembling a camp under the shadow of parliament. We’ve fought the battle on our terms every time.”

Clifford concludes that disabled people’s oppression is caused by the way society is organised, and that even a Jeremy Corbyn-led Labour government might not have ended that oppression.

“There were many policy commitments within the 2015 and 2017 Labour manifestos that would have been ground-breaking for disabled people,” she says in the book.

“But as long as we live under capitalism, there will always be the threat of cuts and regressions and a need for struggle.”

She writes: “It is not inevitable that people with impairments should be excluded and discriminated against, but it is inevitable that policies under a capitalist state will tend to treat less favourably those who are unable to be as productive in the workforce.”

But she also concludes that disabled people must take action themselves to secure the societal changes they want to see, writing: “Disabled people’s experiences since 2010 have taught us that looking to those in power to make everything better only ends in disappointment; to guarantee the changes we need, it is up to us to take action and demand those changes.”

*The War on Disabled People: Capitalism, Welfare and the Making of a Human Catastrophe, by Ellen Clifford, published by Zed Books, is available in paperback at £12.99. ISBN: 978-1-78699-664-0. A summary of the main points and arguments in the book, with pictures, and a British Sign Language translation of that summary, will be published on the Zed Books website