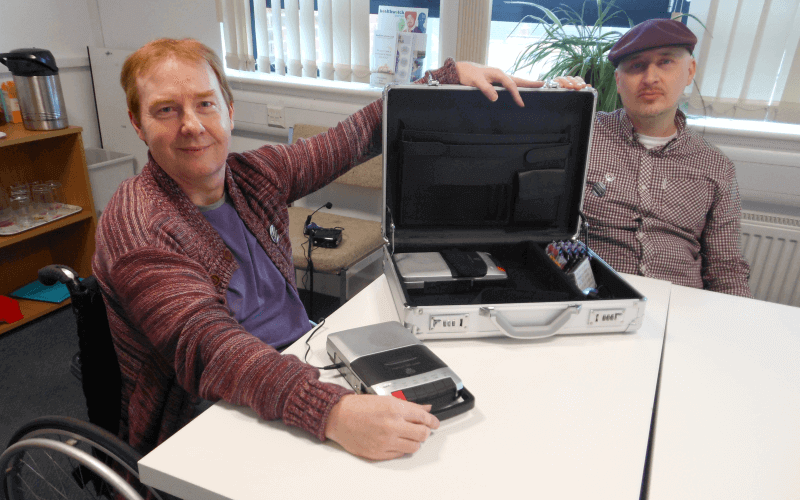 Disabled activists have responded to the government’s continuing failure to deal with the dishonesty and inaccuracy of the disability benefit assessment process by launching schemes to ensure that claimants can record their own assessments.

The campaign will allow disabled people from Sheffield to borrow the specialised equipment needed to record their PIP assessment*.

John (pictured, left), the first person to use the new equipment, says in a video released to publicise the new scheme, which was funded by a JustGiving fundraising campaign: “I am much happier knowing that there will be an accurate record of what has been said in the meeting, knowing that it cannot be changed in any way.

Jennifer Jones, of DPAC Sheffield, said she and her colleagues hoped the scheme would save time and money and the stress of having to undergo the Department for Work and Pensions’ mandatory reconsideration process and tribunal appeals after unfair assessments, and that it would protect claimants from assessors “who deny people medical attention during assessments or from those who bully, browbeat, or threaten claimants”.

DPAC Sheffield is now fundraising to buy more recording kits, and hopes eventually to roll out the scheme nationally if ministers refuse to introduce recording of PIP assessments as standard practice.

The grassroots groups Recovery In The Bin and national DPAC have also combined to provide advice to people who want to record their PIP assessment, which briefs them on the equipment they need and how to use it.

They are also offering details of grassroots groups that will loan the equipment without charge, although there are currently only a small number of such kits.

They are building a map of locations where equipment is available, including the kit being loaned out by DPAC Sheffield. As well as Sheffield, there are currently kits in Cardiff, London and Manchester.

A spokesperson for RITB said: “We are doing this because there is overwhelming evidence that when assessments are not recorded and there are no witnesses, the assessment reports are persistently and fraudulently inaccurate, and are then used to deny people the support they need.

“Recording the assessment is a solid step in ensuring more transparency in assessments and they also give you good grounds should you need to appeal a decision, although by recording, you reduce the likelihood of getting a bad decision in the first place.”

*To borrow one of the two recording kits at no charge, email [email protected]