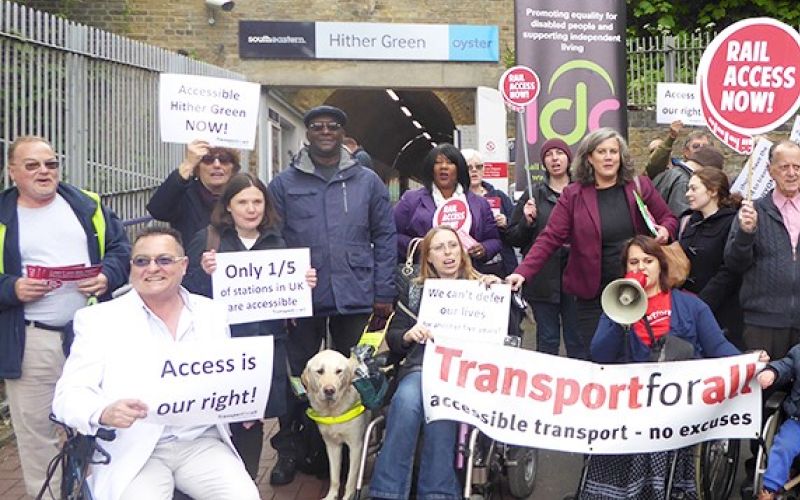 Disabled activists have protested at rail stations across the capital over the government’s decision to postpone £50 million of funding that had been set aside for major access improvements across England and Wales.

Supporters of the user-led Transport for All (TfA) campaign protested about the decision by the Department for Transport (DfT) at the eight stations in London where access improvements have been delayed.

The delays were hidden on page 138 of a 172-page report by Sir Peter Hendy, the chair of Network Rail, which contained his detailed recommendations to the government for “replanning” Network Rail’s investment programme for 2014-19 across England and Wales.

Even before his recommendations, the previous Tory-led coalition government had already cut the budget for the Access for All programme from £370 million over its first 10 years to just £103 million over the next four.

A DfT spokeswoman confirmed this week that ministers had accepted Sir Peter’s recommendations in full.

In December, rail minister Lord Ahmad had confirmed in a parliamentary answer that access works at 26 rail stations across England and Wales – including the eight London stations – would be delayed, although he did not link that decision with Sir Peter’s recommendations.

A Network Rail spokesman this week refused to confirm how many stations faced delays to access improvements as a result of the cuts to the Access for All programme.

As part of its Rail Access Now campaign, TfA is calling on all political parties to promise to reverse the Access for All cuts in their general election manifestos.

Among opposition politicians who attended the protests in London were Labour’s Chuka Umunna and Heidi Alexander and the Liberal Democrat MP Sarah Olney.

“All the parties must commit to restoring Access for All funding, and ensuring that our railways are open to everyone.

“Disabled and older people can’t be expected to defer their lives for another five years while accessibility funding is raided to plug holes elsewhere in the Network Rail budget.”