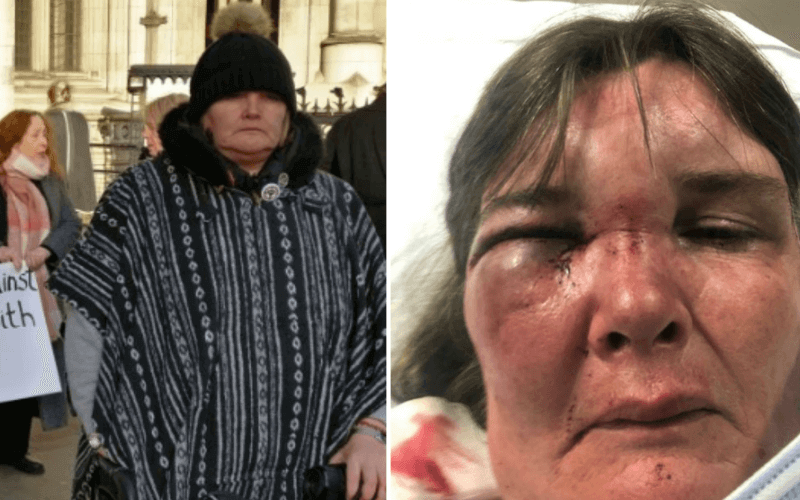 A prominent disabled activist is calling for stricter controls on electric scooters after she was subjected to a terrifying ordeal that resulted in a violent physical assault which left her needing hospital treatment.

Paula Peters was left with a fractured eye socket, nerve damage, and widespread bruising and bleeding, after the assault in south-east London on Saturday 29 August.

Peters, a member of the national steering group of Disabled People Against Cuts (DPAC) and a prominent member of the Mental Health Resistance Network, was walking her friend’s dog when she was passed at high speed by five children riding e-scooters, with one of them catching her arm as they passed.

Her calls for them to slow down resulted in a barrage of abuse and harassment.

Despite pleading with them to leave her alone, and her obvious distress, one of the children rode his e-scooter repeatedly up and down the road beside her, and then falsely claimed that she had pushed him when she reached out her arm to try to stop him.

Increasingly scared by the threats and abuse, she left the scene.

A few minutes later, a car mounted the pavement, missing her and the dog by inches.

A woman jumped out and accused her of punching her son, before grabbing her hair.

Peters said: “She dragged me out into the middle of the street, and she started punching me repeatedly in the face and anywhere she could reach. There was blood everywhere.

“I had a dog lead in my hand, the dog was whimpering and cowering on the floor, and she just rained punches on me.

“I lifted my head up and the little boy who said I had pushed him was grinning on the pavement, and then he gave me the middle finger.

“Then she forced me to apologise to him. I thought it was the only way I could get her to stop.”

She took refuge in one of the houses, and was taken by an ambulance to hospital, where she received treatment for a fractured right eye socket and multiple cuts and bruises.

She said: “The doctor was really angry. He said my injuries were like I had been in a severe car crash.

“They got one of the nurses to sit with me because I was really scared. All of them were absolutely brilliant.”

Peters, who was recovering from the loss of a relative just weeks before the attack, is not currently planning to press charges because she says she is too traumatised and fears retribution.

She said: “It has put me back emotionally. I am having panic attacks just going out the front door.”

More than a week-and-a-half later, she is still experiencing nerve damage to her face, concussion, blurred vision and difficulty eating and drinking.

But she said she had been “absolutely overwhelmed” by the support she had received from friends and fellow activists, particularly on social media.

She said: “It was absolutely humbling. It was overwhelming. I felt really touched by the love and support.

“It has helped me get through some really, really rough days. I have been in a really dark place since this happened.”

Now, following her ordeal, she is planning to spearhead a campaign for legal restrictions on the sale of e-scooters, with support from DPAC.

She said: “Why was an eight-year-old child on a privately-bought scooter that can go up to 30 miles an hour, with no helmet, no lights?

She said she was also concerned about people in mental distress, like herself, who can be triggered by someone on a scooter coming up behind them at speed.

Peters said: “I want people to support the campaign to get these privately-bought e-scooters regulated so people under the age of 16 can’t get their hands on them, but most importantly they are not ridden on the pavement.”

She also wants users to be forced to have a licence, insurance and appropriate head-gear.

Although privately-owned e-scooters cannot legally be driven on public roads, cycle lanes or pavements, they can be legally used on roads and cycle lanes in trial areas if they are part of a rental scheme, through a Department for Transport pilot project.

Their use – both legal and illegal – is becoming increasingly common.

Peters said: “The government rushed through these laws and they have not regulated this properly.

“I want people to support this campaign because it puts disabled people, all sections of the community, at risk when they are out on the pavements just going about their daily lives.

“Someone is going to get killed or seriously hurt unless something is done.”

DPAC is now collecting evidence about e-scooters to give to MPs so that it can push for stricter regulation.

In the wake of the attack, a fellow disabled activist, “Ben Claimant”, set up a fundraising page for Peters, which has already reached more than £1,800.

She plans to use the proceeds to pay for the mental health therapy she needs after her long-term support from an NHS community mental health team was withdrawn unexpectedly in July.

A Metropolitan police spokesperson said officers had been called to an address in south-east London at 5.45pm on Saturday 29 August by London Ambulance Service following a report of a woman injured after an assault.

The spokesperson said: “A 49-year-old woman was found with a serious facial injury. She was treated at the scene by paramedics before being taken to hospital.

“It was reported that she had been assaulted by a woman, who had driven up in a car. The suspect had left the scene before police arrived. There have been no arrests.”

*Any witnesses or anyone with information about the incident is asked to call police on 101, quoting CAD 5514/29Aug, or Crimestoppers anonymously on 0800 555 111

Picture: Paula Peters campaigning outside the Royal Courts of Justice in 2017 (left), and after the attack