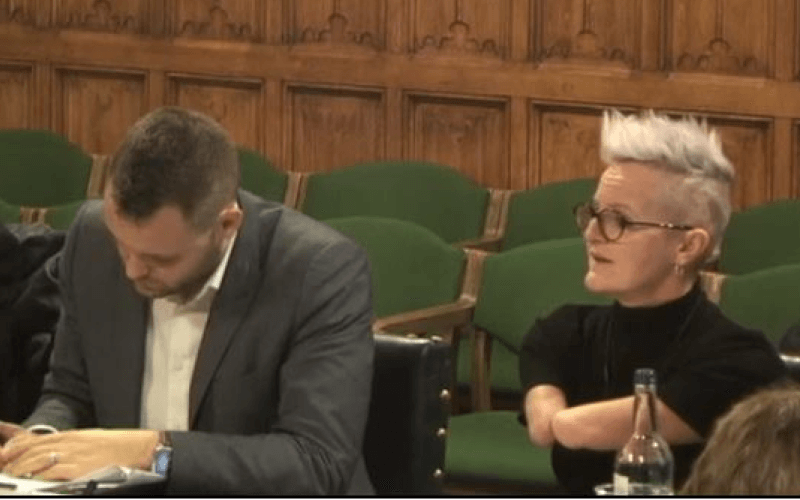 A disabled campaigner has called for a “sham” inquiry by MPs into the special educational needs and disability (SEND) system to be halted until it agrees to address the increased levels of segregation of disabled students and cuts to their support.

Tara Flood, director of The Alliance for Inclusive Education (ALLFIE), spoke out the day after she gave evidence to the Commons education committee’s inquiry.

She told an event held in parliament last night (Wednesday) to mark the University and College Union’s (UCU) first national day of action for disability equality in education that the committee was refusing to “discuss the increased levels of segregation, refusing to discuss what needs to happen for this country to be more inclusive, is refusing to discuss cuts to SEND support services”.

She added: “I would urge everybody in this room to write to their MPs to demand an end to that inquiry until they have decent terms of reference that recognise the attack on inclusive education in this country.”

Flood told Disability News Service this morning that she had been feeling “more and more angry” about the way her evidence had been handled by the committee’s chair, disabled Tory MP Robert Halfon.

She said: “I felt I was the only one who was ignored when I attempted to speak.

“I was stopped from talking when I started talking about the need for a rights-based education system.

“In hindsight, I shouldn’t have been that polite.”

She is to write to the committee to express her concerns and will also contact the committee’s Labour MPs to ask why they had not made a stronger case for the committee’s “incredibly weak” terms of reference to be expanded.

Flood told the committee on Tuesday (pictured) that there had been a “spike” in the number of parents contacting ALLFIE for help since the government’s Children and Families Act became law in 2014.

She was one of a number of SEND experts giving evidence to the committee as part of its inquiry into the impact of the major reforms to the SEND system introduced through the act.

She said: “I would say the majority [of parents who contact ALLFIE] are at the end of their tether.

“They come to us and then recount the most appalling experience of struggle, of fight, of battle, feeling embattled, and a lot of this revolves around the myth of parental choice.”

She told the committee that there was no choice in the current system, and that parents had to accept the decisions of their local council, school or other education provider.

She said: “The minute that a parent says, ‘we want something different,’ particularly if it is, ‘we want our young person in mainstream with all the right support,’ parents are then often finding themselves isolated, labelled as a difficult parent, an unreasonable parent often, and are then left to fight.”

Flood said that this often leads to “a hugely expensive and very adversarial battle” with the local authority.

She added: “There is a perfect storm in terms of schools struggling with league tables, struggling with funding, parents struggling to get the right support for themselves and for their young person and yet still expected to talk about having choice and having a new aspiration for their children.”

Flood said the “real issue” was that the SEND system was “needs-led” rather than “rights-led”.

She said: “Parents will often have to get into this awful competitive round of who has the most significant need.”

The committee also heard from Steve Haines, executive director for policy and campaigns for the National Deaf Children’s Society, who pointed to a survey by the charity of about 1,000 parents of D/deaf children and young people.

He said that only about four per cent felt they had seen an improvement in support since the act was introduced while 82 per cent were concerned about funding.

One of the areas the committee’s inquiry is examining is the act’s replacement of statements of special educational needs with new education, health and care plans (EHCPs), which last from birth to the age of 25 and set out all the support a family in England should receive.

Dame Christine Lenehan, director of the Council for Disabled Children, which is a “strategic reform partner” with the Department for Education on its SEND reforms, said a “fundamental criticism” of the act was that it had “concentrated almost wholly in its first three years on the 2.8 per cent of children who have EHCPs.

“Our worry is that the other 12 per cent of children who actually need SEN support are not yet getting that support in the way that they should.

She also said there was an “inbuilt unfairness in the system” because it was usually people who were “white and middle class and educated” who were able to fight the system and take their battle for support for their child to a tribunal.

Guardian journalist John Harris, whose son is autistic, told the committee that the new system was “failing” despite its good intentions, partly because it was “enacted at a time of austerity, which continues”.

He said parents often find an “almost impossible wall of paperwork” when they seek support for their disabled child, followed by an “almost straight kneejerk refusal” by the local authority.

He said that, “irrespective of the good intentions” in the act, its execution had left “a huge amount to be desired, and I would say we are faced with a system in crisis”.