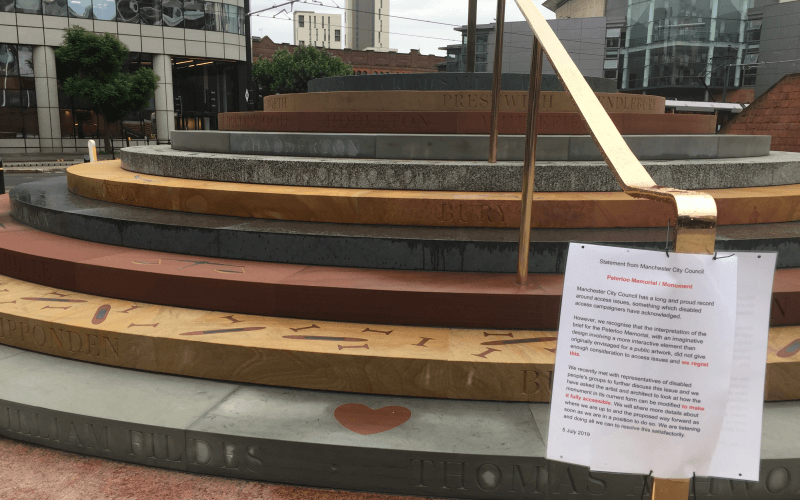 A grassroots campaign that “harnessed the anger, determination and collective action” of disabled people in Manchester has secured a council promise to ensure a new memorial to the victims of the Peterloo massacre is made “fully accessible”.

The council-funded memorial is currently completely inaccessible to many disabled people, even though it was designed to be used as a platform for speakers and demonstrators, mirroring those who spoke during the protest in 1819 that led to the massacre*.

But following months of campaigning, and weekly vigils by disabled activists, Manchester City Council has now agreed make the monument “fully accessible”, ensuring that “everyone can reach the top”.

It has also agreed that no-one will speak from the inaccessible memorial during events tomorrow (Friday) that will mark the 200th anniversary of the massacre.

Instead, the council says the monument will be used as “the backdrop to the event rather than the centrepiece or any sort of platform for performance”, although disabled activists say they will go further and creatively “obscure the memorial from view” for at least part of the day.

The memorial was unveiled quietly earlier this week without a civic ceremony.

Some of the disabled campaigners who have protested over its discriminatory design were at the site again yesterday to inspect the memorial with artist Jeremy Deller, following a meeting with the council.

They say the council is now looking at two options: incorporating a ramp into the design – the solution favoured by disabled campaigners – or installing a platform-style chair lift, which appears to be the council’s favoured option.

Both options will be examined by the architects that have worked on the memorial with Deller.

The council originally insisted that it was unlikely that any “fundamental changes” would be made to the inaccessible memorial, but later backed down in the face of the campaign.

Disabled campaigners are now hoping that a new, fully accessible version of the memorial will be completed in time for the 201st anniversary of the massacre, in August 2020.

A public consultation on designs for the new version of the memorial will begin soon, with the hope that it will be “meaningful, accessible and transparent”.

Dennis Queen, from Manchester Disabled People Against Cuts, said the decision to reveal the memorial with no ceremony or gathering was “a welcome sign of good faith from a local authority that really is suitably concerned about the whole scandal and will try to fix this error by retrofit”.

She said it was a shame the council had not taken seriously the early concerns that were raised by disabled people about the memorial.

She said: “A lesson must be learned here. Listen to disabled people.

“Disabled people have a strong, radical local movement which has fought hard for involvement in and consideration from our local authority.”

She said the campaign showed that disabled people would take action if they were excluded from local politics in Manchester.

Queen said: “Peterloo left a legacy of strong radical activism and that affected disabled people too.

“The Peterloo memorial will be a centre point for all local activism for, we hope, at least the next 200 years. We will join in. Invited or not.”

Brian Hilton, digital campaigns officer for Greater Manchester Coalition of Disabled People (GMCDP), said the campaign would only be viewed as a success if the council agreed to sign a joint statement confirming its commitment to consult fully on any access design solutions and providing a timetable for work to be completed in time for the 201st anniversary.

He said: “Obviously, GMCDP is proud to have been involved in such a powerful grassroots campaign that has harnessed the anger, determination, and collective action of disabled people.

“It is a campaign that has raised the profile of our exclusion, through our initial protest, weekly vigils, coverage in the media and subsequent constructive meetings with the council, architects and artist Jeremy Deller.

“Although disabled people had been telling the council that its plans for the memorial were flawed, since they were first unveiled last November, it is only really in the last three months that this campaign has really found its voice.

“Although we are reluctant to talk of ‘success’ just yet, a turning point obviously in the campaign came when the council bowed to pressure and announced they were committed to making the memorial ‘fully accessible’.”

But he said the campaign was “far from over”.

Hilton said: “Our aim is that by working with the artist Jeremy Deller, an elegant design solution will be found that not only provides full access to the memorial but also enhances what has already been built.

“The steps tell the story of those massacred on St Peter’s Fields 200 years ago.

“Perhaps [a ramp would] tell a different story, but fundamentally our struggle is the same, a fight for liberty and equality that disabled people are all too familiar with.”

The memorial is positioned near what was known in 1819 as St Peter’s Fields, the site of the massacre, and is outside the current Manchester Central Convention Centre, which in a few weeks will host the Conservative party’s annual conference.

A spokesperson for the city council said: “The council has acknowledged that the innovative and imaginative interpretation of the design brief, with a greater emphasis on interaction than originally envisaged for a public artwork, meant that not enough consideration was initially given to accessible design issues.

“We have listened to, and engaged with, the concerns of disability access campaigners who have raised this issue, and we are committed to making the monument fully accessible – so that everyone can reach the top.

“Details of a proposal for how this will be achieved are being finalised and will be announced in the next few days.

“Both the council and Jeremy Deller are determined that the solution will be of the highest design quality and make a positive contribution to the overall appearance of the memorial as well as its accessibility, and dialogue will continue.

“The memorial will be there in its current form in the short term – enabling it to form a backdrop to the 200th anniversary commemorations – with the modification taking place afterwards.”

Meanwhile, tomorrow’s events to mark the 200th anniversary will include three performances of From The Crowd, which will include eyewitness accounts of those present at Peterloo intertwined with the words of contemporary poets and protesters, including some of the disabled activists who campaigned to ensure an accessible memorial.

Disabled activists are set to “obscure the memorial from view creatively” during the three performances.

Between the three shows, the memorial will be visible for the public to explore.

Disabled campaigners have also issued an appeal for solidarity to other campaign groups not to use the inaccessible top of the memorial as a platform during future rallies over the next 12 months.

They have produced a large banner with a solidarity pledge that allies can sign during From The Crowd.

The pledge commits allies to rally at the bottom of the memorial with disabled people, until everyone can “rally at the top together”.

*On 16 August 1819, paramilitary and military forces attacked more than 60,000 peaceful pro-democracy and anti-poverty protesters in Manchester, which led to 18 deaths and an estimated 700 serious injuries, in what became known as the Peterloo Massacre

Picture of the memorial by Tony Baldwinson/GMCDP