You are here: Home / Housing / Bedroom tax campaigner’s ‘contempt’ for ministers who forced his family to fight 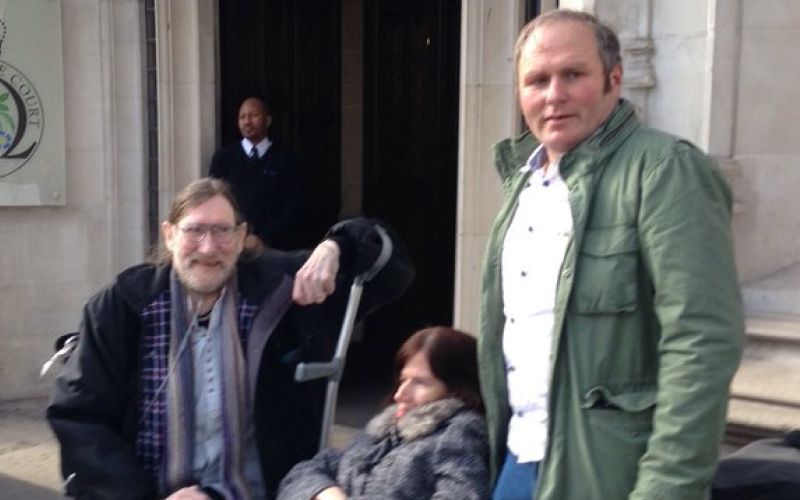 One of the disabled campaigners whose “bedroom tax” cases were heard in the Supreme Court this week has spoken of his “contempt” for ministers who have forced them to spend years fighting for their rights through the legal system.

Paul Rutherford said it was tough and even “scary” to take on the government, but that he and his wife Susan “owe it to all disabled people to see it through”, despite a legal battle that began in 2013.

He said: “I have nothing but contempt for anyone who can put people like us through this, just by making a policy that is ideological and hasn’t saved money.”

The Supreme Court was asked this week to deliver a final ruling on whether the bedroom tax discriminates “unjustifiably” against disabled people.

The court heard evidence concerning six disabled people, who have all been struggling since the introduction three years ago of what the government calls its spare room subsidy removal policy.

Disabled activists were outside the Supreme Court in Westminster to show their support for the disabled people and carers who have spent years trying to persuade the courts that they should be exempted from the bedroom tax.

Bedroom tax regulations mean tenants in social housing are punished financially if assessed as “under-occupying” their homes, with about two-thirds of those affected being disabled people.

The Department for Work and Pensions (DWP) has argued that the needs of disabled people subject to the bedroom tax because they need an extra room should be met by discretionary housing payments (DHPs), extra funds handed by DWP to local authorities.

But Paul Rutherford told Disability News Service after the hearing that ministers “ought to walk in our shoes before deciding we need encouragement to work.

“We work 24/7 looking after Warren, even with the carers who come in every day to help.”

He and Susan care for their 16-year-old disabled grandson in an adapted three-bedroom bungalow in Pembrokeshire.

Both the Rutherfords are disabled and can only look after Warren, who needs 24-hour care, with the help of a paid, overnight care worker, who stays overnight in their third bedroom, which is also used to store vital equipment for their grandson.

Although the rules allow for an extra bedroom if an adult claimant or their partner needs overnight care, this does not apply to families with a disabled child.

Rutherford said: “Sue is especially angry because our security has been taken away, and because the DWP said in court [in 2014] that us having carers in was a ‘lifestyle choice’ and means nothing.

“It is a lifestyle choice to give up her life for the last 15 years and look after Warren. It means he can have a loving, caring family life and not be ‘consigned’ to a home at a cost of at least £250,000 a year.”

Rutherford, who attended the first day of the hearing, said it was worth the impact on his own health to be able to look the seven Supreme Court justices in the eye, but that having to now wait two or three months for the court’s decision was “massively stressful”.

He praised the support from other disabled people, including Disabled People Against Cuts, WinVisible and Sisters Uncut at the Supreme Court, with further support from Carers UK, Grandparents Plus and Papworth Trust, and the Child Poverty Action Group, which provided the legal team.

He added: “We realised we would have to carry on the fight when we heard about others in similar situations.

“Some have cases stayed pending the outcome of this week’s hearing and others weren’t able to appeal for many reasons.”

Another of the cases heard this week by the Supreme Court was that of Mervyn Drage, who lives alone in a three-bedroom flat in a high-rise block, let to him 19 years ago because his council considered it was unsuitable for families.

He has a number of significant mental health problems and physical impairments, which are exacerbated by stress, anxiety and changes to his routine, and is anxious about having to move if his full housing benefit is not reinstated.

Drage has had to rely on DHPs from his local council, but they ran out last month and he now has to wait to hear if the council will approve his latest DHP application.

A third case concerns Jacqueline Carmichael, who lives with her husband Jayson in a two-bedroom housing association flat.

Her impairment means she has to sleep in a fixed position in a hospital bed, on an electronic pressure mattress.

Her husband, her full-time carer, cannot sleep with her in the bed because of the risk of hurting her while he’s asleep, but there is not enough space for a second bed, so he sleeps in a second bedroom.

When the new regulations were introduced the Carmichaels had their housing benefit cut by 14 per cent because they were seen as over-occupying their home.

The court heard evidence on two sets of cases over the three days this week.

The first cases were brought by Mervyn Drage, the Carmichaels, James Daly, JD*, and Richard Rourke. The second set of cases include the Rutherfords.

In all of the cases, the high court ruled that the bedroom tax regulations were discriminatory, but that this discrimination was justified and therefore lawful.

She said: “It is about disabled people being entitled to be paid sufficient housing benefit for the size and type of accommodation they need because of their disabilities and not being penalised because they are disabled.”

Ugo Hayter, solicitor at Leigh Day, who acts for the Carmichaels and Richard Rourke, said: “My clients are looking to the Supreme Court to recognise and bring to an end the awful hardship they, and many other disabled people nationally, have been subjected to since the introduction of the bedroom tax.

“They don’t want special treatment, they just want the ability to live with dignity and the same security enjoyed as of right by their able-bodied counterparts, who aren’t made to rely on short term and discretionary payments to meet their housing costs.”

Picture, by Ros Wynne-: Paul Rutherford (left) outside the Supreme Court with Jacqueline and Jayson Carmichael