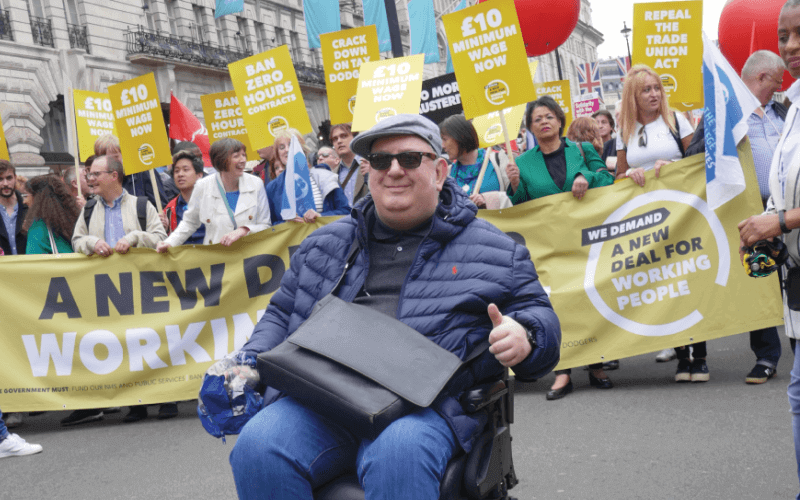 A union has published a booklet filled with tributes to the life and work of the “unique and irreplaceable” disabled activist Seán McGovern, who died two years ago.

The booklet, Remembering Seán McGovern (PDF)*, by Mark Metcalf, is being launched today (Thursday) at a Unite disabled members’ meeting in Birmingham.

It includes tributes from his family, fellow trade unionists, disabled activists and Labour party members, as well as pieces he had written himself.

The booklet describes how McGovern (pictured) became disabled after he was violently assaulted at the age of 15, how he attended university and then worked for Remploy and became a shop steward, as well as his love for literature, and for writing.

Among his roles were as chair of the TUC disabled workers’ committee and disability officer for the London Labour party.

The booklet describes his significant role in the campaign to keep the Remploy factories open, which included strike action in 2012, how he built strong alliances with Disabled People Against Cuts, and his “deep suspicion” of non-user-led charities that claim to represent disabled people.

Siobhan Endean, the Unite national officer for equalities, said McGovern’s focus had been the fight for “dignity and justice” for disabled people and that he had been “dedicated to providing a collective voice to address the cumulative impact of austerity on disabled people from 2010 onwards”.

She described him as “good fun, irreverent, incredibly intelligent, sensitive, a gentle comrade” and a “firm friend and ally to many activists”.

She said he had educated the union on the social model of disability and had been “determined to change union culture, and to encourage all activists in the union to include social networking with disabled people”, and that it was his “lasting legacy that he won the hearts and minds of so many to equality for disabled people”.

Dave Allan, who represents disabled members on the Unite executive council, speaks in the booklet of McGovern’s key role in persuading their union and the TUC to call for universal credit to be scrapped.

He says McGovern was “able to bridge the gap between trade unions, the disabled people’s movement and the Labour Party”, and that he was “unique and irreplaceable”.

Frances O’Grady, TUC’s general secretary, says McGovern was a “committed trade unionist, a great comrade and a thoroughly decent man”, and a “passionate, principled champion of disabled people at work and in society”.

Others to pay tribute in the booklet include Claire Glasman, co-founder of WinVisible, Ellen Clifford and Paula Peters, from Disabled People Against Cuts, as well as Marsha de Cordova, the Labour MP for Battersea, who describes in the booklet how McGovern encouraged her to be active within Unite, and later to stand as a Labour councillor and for parliament.

Nearly half of the booklet features poetry, speeches and other writing by McGovern himself, which appeared on his blog, on subjects including Remploy, activism, Atos and the work capability assessment, direct action, his opposition to Brexit and independent living.

In June 2011, he wrote about austerity on his blog: “These cuts and deprivations are raining down on us both nationally and locally.

“So, if the Tory storm misses you nationally, you can bet on a sustained downpour from your local council.”

He ends the blog with the lines: “I cannot sit by and let the few destroy my class! I will not stand by and see my welfare state destroyed and sold off for short-term profit! I will resist these thieves in our midst!”

Seven years later, he writes about austerity again, saying: “For the past eight years disabled people have been subject to vicious attacks across all areas of our lives caused by the disproportionate impact of austerity measures and the dismantling of the welfare system.

“Social cuts have led to human catastrophe. This misery continues and will continue to spread misery and poverty as universal credit is more widely rolled out catching disabled people in its net.”

Paula Peters ends her contribution to the booklet with the following tribute: “When Seán died there was such a mass outpouring of shock.

“It showed the massive amount of respect he had earned for his endeavours.

“It is an amazing legacy, he touched so many people and empowered so many disabled people to get involved in trade union activism and we will always be grateful to him for that.” 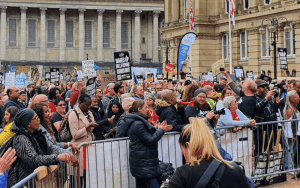 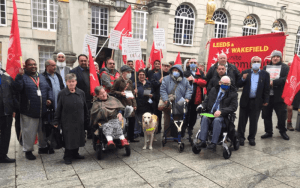