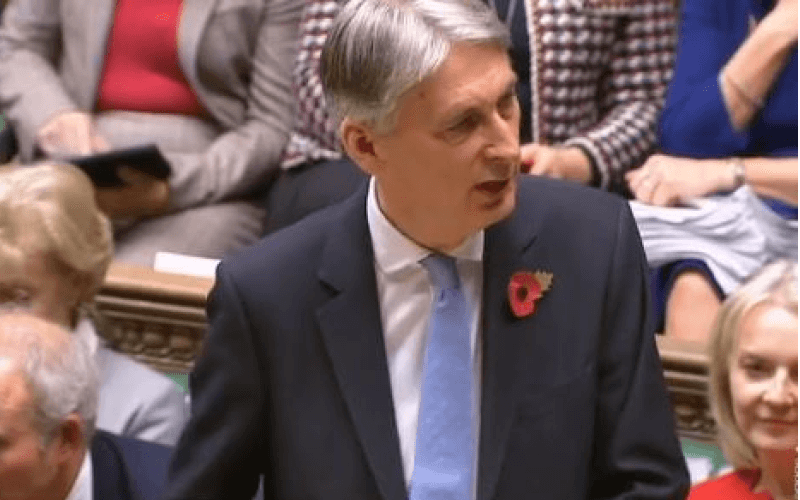 The chancellor’s claim that the “era of austerity is finally coming to an end” and his announcement of further short-term funding for adult social care will “ring hollow” for many disabled people following years of cuts, say user-led organisations.

In this week’s budget speech, Philip Hammond (pictured) provided an extra £240 million for adult social care next year, and another £410 million that will be shared with children’s social care.

There was also another £55 million for disabled facilities grants (DFGs) for this year (2018-19), although – in an error described by a Treasury press officer as “a slip of the tongue” – Hammond wrongly announced this as £45 million in his budget speech.

The government had previously agreed to increase funding for DFGs – which pay for access improvements to disabled people’s homes – from £220 million in 2015-16 to £505 million in 2019-20.

The extra funding for social care, described as “a short-term sticking plaster to stave off catastrophic collapse in social care” by Labour’s shadow minister for social care Barbara Keeley, comes ahead of a long-delayed green paper on adult social care, due by the end of the year.

The figures from NHS Digital show that, in real terms – allowing for inflation – spending on adult social care by English councils has fallen by six per cent since its peak in 2009-2010, from £19.16 billion to £17.93 billion in 2017-18. This figure does not allow for the continuing growth in demand for adult social care over that period.

Dr Rupert Earl, chair of the Spinal Injuries Association, was among those disabled campaigners sceptical of the difference the new social care funding would make.

He said: “The conclusion that ‘the era of austerity is coming to an end’ will ring hollow for many thousands of spinal cord-injured and other disabled people.

“Our own evidence shows that the reality is very different; care packages are all too often being cut to unsafe levels, waiting times for hospital admissions and outpatient appointments are getting ever longer and disabled people are more likely to be living in poverty.”

He added: “The crisis in care funding is a reality for many and we wait to see how the modest funding promised will remedy many years of cuts.

“Our advice line callers tell us of widespread variation in access and eligibility to care, delays in assessment and arbitrary caps on what is funded.”

The disabled crossbench peer Baroness [Jane] Campbell said the new money for adult social care would be “largely swallowed up by the huge local authority deficit experienced up and down the country.

“What little money that might be left over will be targeted at providing the same limited care for older people leaving hospital, to clear the NHS beds crisis.

“Younger working age disabled adults will not get a look in, as usual.

“For those desperate to progress independent living in this country, this budget is a sure sign that their human right to inclusion is not on the government agenda.”

Professor Peter Beresford, co-chair of Shaping Our Lives, said it was a budget “from a government concerned with its survival rather than people’s wellbeing or encouraging a sustainable economy”.

He said: “For social care, it’s yet again a case of sticking plaster – too little, too late – on an inherently defective system.”

Dr Victoria Armstrong, chief executive of Disability North, said: “Any increase is welcomed, but £240 million for adult social care this year [announced last month at the Tory party conference] and £650 million for adult and children’s social care next year still falls short of what is necessary, and if this is just to plug holes in existing systems and services then that’s not going to work.

“Our social care system is not fit for purpose; there are huge flaws, many of which are violating the human rights of disabled people on a daily basis, leading to further health problems and, in some cases, death.

“And so an investment needs to be made in order to rethink the system, not just throw money at a system unfit for purpose.”

But she said that Disability North had seen some good health and care initiatives in the north-east, including the introduction of personal health budgets and “good use and support of direct payments in Newcastle”.

She said there needed to be “a focus on what the person at the centre of the social care wants, and the outcome or service provision shouldn’t depend upon where you live”.

Meanwhile, Spectrum Centre for Independent Living, which is based in Southampton, has produced a discussion paper aimed at shaping its own vision for social care, ahead of the publication of the government’s green paper later this year.

Spectrum said it was seeking “bold, creative and radical solutions” and wanted to “encourage everyone with an interest in the future of social care to contribute their own ideas so that we can present a new vision for social care that meets everyone’s needs in a sustainable way”.