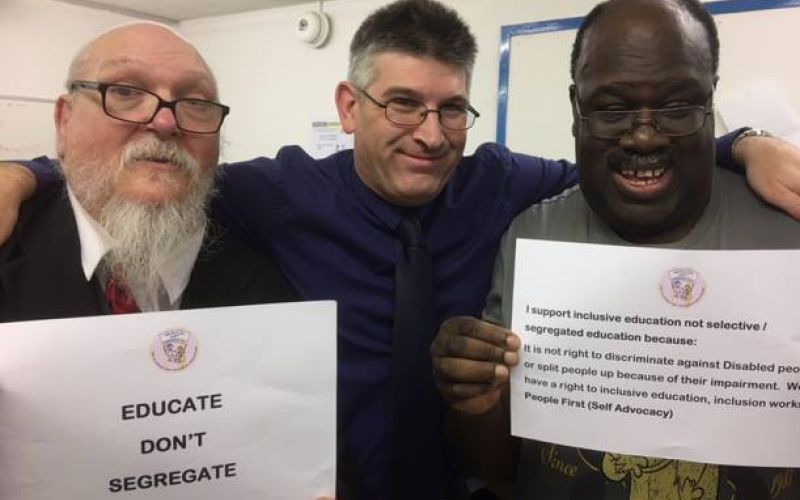 A new campaign is calling on disabled people and their allies to show their opposition to “deeply flawed” and “discriminatory” government plans to increase provision of grammar schools in England.

The Alliance for Inclusive Education (ALLFIE) is hoping that its Educate Don’t Segregate campaign will highlight how expanding selective education will lead to a “dramatic reduction” in mainstream education placements, and increase segregation, for disabled pupils and those with special educational needs (SEN).

ALLFIE is calling on supporters to photograph themselves with the “Educate Don’t Segregate” slogan, and share the pictures on social media with the hashtag #educatedontsegregate.

ALLFIE points out that disabled pupils, particularly those with higher support needs, are vastly under-represented in grammar schools, and that a more selective system will further discriminate against them.

It says there was no mention of disabled pupils in the government’s consultation paper on its plans, Schools That Work For Everyone, when it was published in September.

Now ALLFIE is trying to persuade as many opponents as possible to voice that opposition by taking part in the consultation before it closes on 12 December.

ALLFIE says the government’s plans are a clear breach of article 24 of the UN Convention on the Rights of Persons with Disabilities (UNCRPD), which states that an education system that separates and segregates disabled children is a violation of their right to mainstream education.

And it points to guidance published this summer by the UN’s committee on the rights of persons with disabilities, which says that all segregated education should be replaced by “inclusive classroom teaching in accessible learning environments with appropriate supports”.

But Tara Flood, ALLFIE’s chief executive, said: “The green paper does not so much as mention disabled pupils and those with special educational needs, let alone consider the impact of greater school selection on this already disadvantaged group.”

Flood said the government’s own figures showed disabled children with education, health and care plans (EHCPs) or statements of special educational needs (SEN) represent only 0.1 per cent of grammar school pupils, despite making up 1.8 per cent of the secondary school population.

Flood said these figures demonstrated “a truly shocking rate of underrepresentation which demonstrates that the proposals are inherently discriminatory”.

She added: “It is clear that selection will not, cannot deliver education that is inclusive of disabled children and young people with SEN.

“The very nature of selection via ability tests does the opposite.”

Kate Green, a former Labour shadow minister for disabled people, said that only 20 out of more than 7,500 children in grammar schools in the borough of Trafford in her constituency have an EHCP or statement, while only about three per cent are disabled or have SEN.

She said: “There’s something very wrong with a system that means so few children with special educational needs get access to our grammar schools.

“Parents tell me that there are problems with the entrance tests which don’t recognise the special needs of their children and they also tell me that they believe the grammar schools don’t want their kids.”

The Department for Education (DfE) has repeatedly refused to answer key questions about the consultation paper – including whether it accepts that it breaches the UN convention, and why there is no mention of disabled pupils – or even to say whether it carried out an equality impact assessment of its plans.

But a DfE spokesman said: “Every child, regardless of background or ability, should have access to an excellent education.

“We know that grammar schools provide a good education for their disadvantaged pupils and we want more pupils from lower income backgrounds to benefit from that.

“Our proposals will ensure that any new and existing selective schools will prioritise the admission of disadvantaged pupils and that they support other local pupils in non-selective schools to help drive up educational outcomes.

“As set out in the consultation document, we are clear that relaxing restrictions on selective education can and should be to the betterment, not at the expense, of other local schools.”