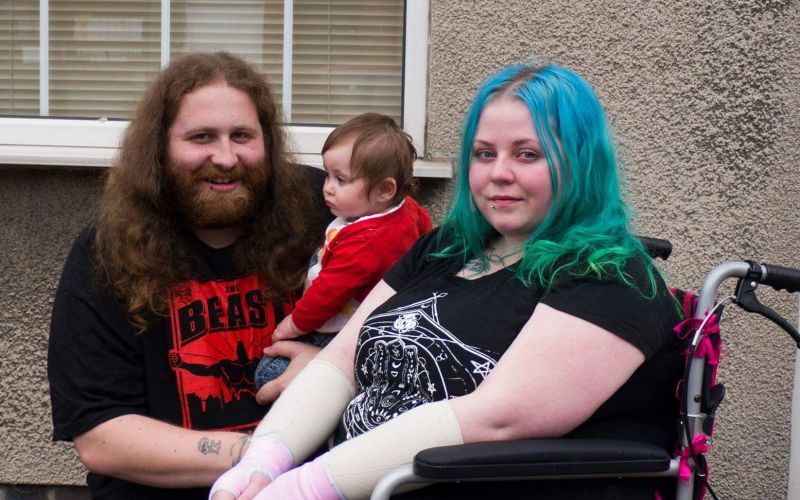 A disability benefits assessor with extreme right-wing sympathies has been suspended by the government contractor Capita after she posted disablist, racist comments about social security claimants on her Facebook page.

The posts were spotted by Sarah Goldstein, whose claim for personal independence payment (PIP) had been turned down following an assessment carried out by the qualified nurse.

Goldstein has significant support needs as a result of fibromyalgia Raynaud’s syndrome, chronic migraines, anxiety and depression, and she was so angry and upset by the “lies” she read in the nurse’s assessment report that she searched online for her social media accounts. She says she was appalled by what she found.

On one occasion, in July 2014, while apparently watching an episode of the Channel 5 reality show Benefits Britain: Life On The Dole, the nurse posted a series of comments about a Roma gypsy who used a skateboard as a mobility aid because he lost his legs as a child in Romania.

In the documentary, he talked positively about the lack of racism in Britain and how he hoped to make a life for himself by working here, and how he had worked as a film extra.

But in one Facebook post, the nurse said: “So it’s not very nice life on a skate board!!!!! He could get a job fitting carpets then maybe just maybe our pensioners could have the retirement they deserve!!!!!!!”

She then added: “I’d like to remove his wheels and catapult the scrounger back to whatever shit hole he came from!!!!”

After seeing these and other posts, Goldstein asked Capita to launch an investigation.

Her husband, Jay, her full-time carer, said the posts made his wife feel “sick” and “upset” at the thought that the nurse had been in their home.

He said: “Sarah hasn’t eaten or slept properly in the last week because of all this. It’s really upsetting for me to watch.”

Disability News Service has found a string of other disturbing posts on the nurse’s Facebook page, showing her far-right sympathies.

In one disturbing Facebook message, posted in April 2014, believed to be just after she started working as a PIP assessor for Capita, she said: “Not sure if a new job [is] supposed to feel like community pay back lol!!”

She has also shared a string of Facebook posts attacking immigrants and asylum-seekers from far-right organisations like Britain First, British Immigration Watch, and Infidels of Britain, including one headlined “Enoch Powell was right!”

Her far-right sympathies also raise questions as to whether the assessment report she wrote was influenced by Sarah’s and Jay’s surname.

Although Sarah is not Jewish, her husband is, and they have a menorah, a nine-branched Jewish candelabrum, on the mantelpiece in the room where the assessment took place.

The assessor visited the Goldsteins at their home in Derbyshire for the assessment earlier this year.

Jay Goldstein said: “She was very quiet. She would ask questions and would then type a lot. But when we got the report back she had literally lied about everything.”

The report claims that Sarah maintained perfect eye contact throughout the assessment, when in fact, Jay said, she had been “visibly agitated, picking at the skin on her hands”.

He said: “Sarah was facing away from her because she has anxiety issues and didn’t feel comfortable looking at her.”

The nurse also claimed that Sarah had perfect understanding of the questions, whereas Jay said his wife repeatedly “um-ed and ah-ed” and kept looking at her husband for help.

Among other errors, she said Sarah had given birth to their 13-month-old daughter AJ naturally, when the assessor did not even ask how she had given birth, which was through a caesarean.

She also wrote that Sarah could go to the shops and bring back shopping, when in fact she has to shop online, with help from her husband, who puts away the shopping when it is delivered.

As a result of the assessment, Sarah was given zero points and found ineligible for PIP, even though she is in the support group of employment and support allowance, which means she has been assessed as having significant barriers to the workplace.

The decision on Sarah’s claim for PIP – which is supposed to cover some of the extra disability-related costs disabled people face – was rubber-stamped by a Department for Work and Pensions (DWP) decision-maker and then approved again through DWP’s own mandatory reconsideration process.

The decision to turn down her claim means Sarah will not be able to apply for a Motability vehicle, which would have made it easier for them to take AJ out of the house, and means she cannot secure other support linked to PIP, such as a disabled persons railcard.

Although Jay can take AJ out on his own, he cannot leave his wife alone at home for long, and without a car they are rarely able to go out as a family.

Her husband said the family would survive without PIP, but he said: “It would be nice if we were given the help that we really need.”

He added: “This isn’t about the money, it’s about the way Sarah has been treated. The system needs to be made a lot safer.”

Gail Ward, a member of the disabled people’s campaigning organisations Black Triangle and the North East branch of Disabled People Against Cuts, who alerted Disability News Service to the case, said the disablist comments on the Facebook page were “appallingly reflective of what many disabled people have to endure daily, which have been made worse by the government’s rhetoric”, while the racist comments “were just as shocking”.

She said the nurse should be “sacked forthwith” and prosecuted for inciting racial hatred.

Ward said the calibre of some healthcare professionals hired by government contractors such as Capita was “alarming”, while the quality of assessments for both PIP and ESA was sub-standard.

She said she was “concerned at the amount of genuine claimants who were losing their cars and jobs due to being wrongly denied PIP, only to be given it back at appeal”.

And she said that disabled people were living in fear of losing the “vital safety net” of support through PIP and ESA, with billions of pounds wasted on repeated, flawed assessments.

She said: “Disabled people do not object to being assessed periodically, as this has always been the case, but they do feel they are being deliberately targeted and live in fear of what campaigners call ‘brown envelope syndrome’.”

A Capita spokesman said: “The individual was suspended as soon as we were made aware of the allegations, and further investigations are taking place.

“All prospective assessors are subject to strict security and vetting checks. We also have strict policies in place which govern the use of social media.”

Capita has told the Goldsteins this week that the report completed by the nurse would not have been approved if it had been randomly selected for a quality audit, and that they would now send another healthcare assessor to carry out a fresh assessment.