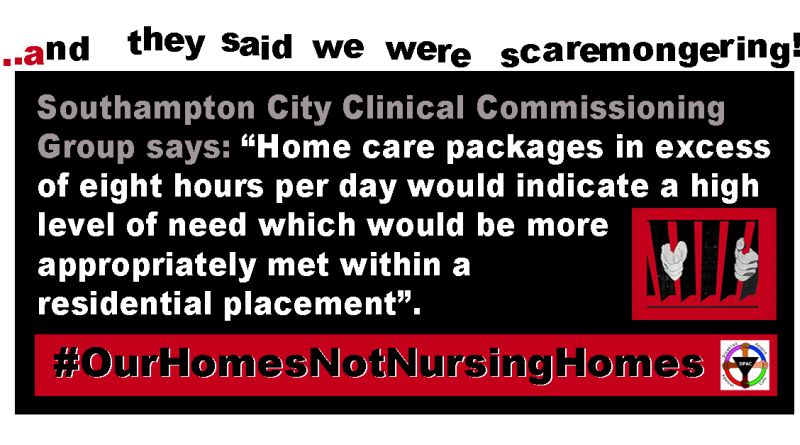 Disabled people who need more than eight hours of long-term healthcare a day should be pushed into residential care rather than being allowed to continue living at home, according to a policy introduced by NHS bosses.

The NHS Continuing Healthcare Choice and Equity Policy was brought in last year by Southampton City Clinical Commissioning Group (CCG), but without a full public consultation.

The policy applies to people with complex health needs, who have been assessed as eligible for care arranged and funded solely by the NHS.

Last year, it emerged that at least two other CCGs – Mid-Essex and Enfield – had introduced rules refusing to fund home-based packages of support for those eligible for NHS continuing healthcare if the cost was more than 10 per cent above a place in a nursing home.

There were concerns then that such policies could lead to former users of the Independent Living Fund (ILF) – and other disabled people with high support needs – being forced into residential or nursing homes, following ILF’s closure in June 2015.

Now disabled campaigners have discovered that Southampton CCG’s policy on NHS continuing healthcare currently states that “home care packages in excess of eight hours per day would indicate a high level of need which would be more appropriately met within a residential placement”.

The document says the policy has been developed “in light of the need to balance personal choice alongside safety and effective use of finite resources”.

And it warns that: “A package of continuing care for a person in their own home will normally be considered to be cost effective if it is the same (or less) than the anticipated maximum cost of a care package delivered in an alternative appropriate location.”

The policy says that in “exceptional cases”, where home care costs are higher than residential care, the CCG will fund a home care package – through a personal health budget – that is “no more than 10 per cent higher than the anticipated cost of a care package delivered in an alternative appropriate location such as a care home”.

Linda Burnip, co-founder of Disabled People Against Cuts (DPAC), said: “The suggestion from Southampton CCG that anyone who needs more than eight hours support a day to live independently should instead be institutionalised is totally unacceptable and will be actively opposed by DPAC and their supporters.”

Ian Loynes, chief executive of Spectrum Centre for Independent Living, a user-led organisation which campaigns and provides services in Southampton, said he would be seeking an urgent meeting with the CCG to discuss the document.

A spokeswoman for the CCG said it “completely support people’s right to live independently”, while the policy “ensures that the care provided reflects the choice and preferences of the person whilst balancing the need for safe and effective care that makes the best use of available resources”.

She said the sections on people needing more than eight hours care a day and waking night care were “guidelines”, and that each person was dealt with “on a case by case basis”.

She said the policy was developed in consultation with “clinical staff” and Healthwatch Southampton, and was currently under review, although there was no link to a consultation on its website because it believed that it could obtain “more in depth engagement” through “meetings with service user groups”.

She added: “We understand that a number of CCGs are reviewing their policies to include similar guidance for the future.

“We have never, nor will we ever, force anyone into residential care.”

The spokeswoman said she believed the policy did not breach the UN Convention on the Rights of Persons with Disabilities, or any current UK legislation.

She said there were “a number of other CCGs with equity and choice policies”, although the CCG did not know how many.

She added: “No one has been placed in residential care as a result of this policy after initially expressing a wish to live at home.”

Picture: A meme designed by DPAC in response to the CCG’s policy