You are here: Home / Housing / Care crisis: Council’s failings mean disabled man has to be dragged upstairs to his flat 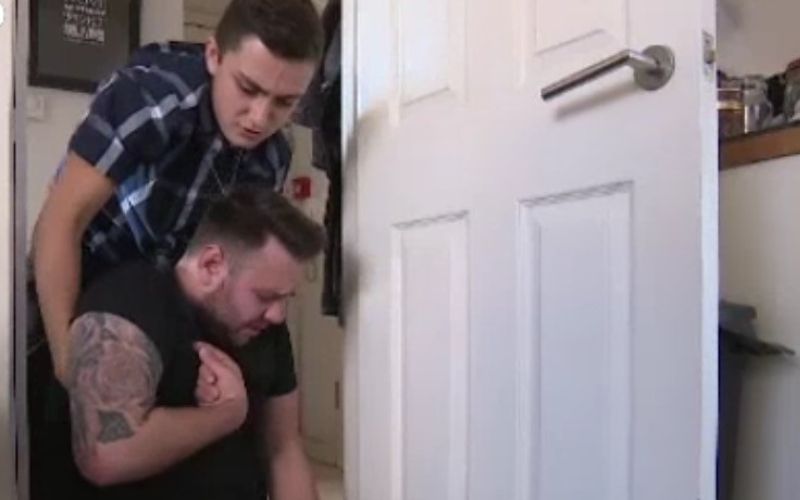 A disabled man has to be dragged up the stairs to his second-floor flat by his personal assistant because of his local council’s failure to rehouse him in safe, accessible accommodation.

Robert Carver – who is paraplegic – has also been told by his GP, nurse, occupational therapist and psychologist that he needs 24-hour-a-day care, but his council has given him just 28 hours a week.

The inadequate care package means that for two days a week he is left on his own in the inaccessible flat in Hove, Sussex – up two flights of stairs – with no access to food or water, or the ability to toilet or clean himself, even though he is incontinent.

Even on the days that he does have support from his personal assistant (PA), he is alone with no support from 5pm – or even earlier – until noon the next day.

Brighton and Hove council has been asked repeatedly over the last two years to provide him with a proper support package and find him a ground-floor flat with an extra bedroom for an overnight care worker, but has failed to act.

Carver’s flat is at the top of two flights of narrow, steep stairs, and the building has no lift, so the only way he can get to his flat when he returns from one of his many health appointments is to be dragged up the stairs by his PA.

Because of the appointments he needs to attend, he only has enough PA support for five days every week.

Carver, a former artist and designer, said he was at his “wit’s end”.

His flat is “tiny and cramped” and none of the doorways are wide enough for a wheelchair, so he has to be “pulled around on the floor like an animal” by his PA if he needs to move to another room (pictured).

The bathroom is so cramped that he has to throw himself in the bath, or be thrown in by his PA.

He said: “All of this means that I am constantly damaging my bones and joints. This damage is so bad that my doctors are refusing to embark on new treatments which could ease my condition until I have more suitable accommodation.

A council spokesman said in a statement: “Our adult care team is continuing to work with NHS colleagues to try to make sure Mr Carver receives the care and support he needs at any given time.

“We also recognise that Mr Carver’s current accommodation is unsuitable, and he is in our top priority banding for alternative accommodation.

“We have recently acquired some emergency accommodation that has wheelchair-adapted units, and we are hoping to move Mr Carver on an interim basis in the next couple of weeks.

“Unfortunately there is an acute shortage of accommodation available that is suitable to his needs.

“Since March we have only had two wheelchair-accessible properties become available in social housing and had other households in equal need who had been waiting longer.”

When asked by Disability News Service (DNS) why there was no apology in its statement, a spokesman said: “We are sorry that we have not so far been able to offer Mr Carver accommodation that meets his expectations.”

He then said that Carver had been offered temporary, wheelchair-accessible accommodation in April, and had turned it down.

But Carver said he had turned down the flat in a notorious Brighton property because it was unsuitable, not properly accessible and risked damaging his health even further, while his medical team had “refused point blank” to allow him to be moved there.

Yesterday, following approaches by DNS and other media organisations, a council manager emailed Carver to say that “if it is unlikely that you will secure social housing in the imminent future, you will be moved to wheelchair adapted emergency accommodation in the next couple of weeks”.

But he told the manager that he would not allow the council to move him into “some dilapidated, damp, further risk to my health emergency accommodation as you have tried this before and were completely and immediately shot down by my medical professionals”.

Carver’s story was revealed as the Care Quality Commission today (Thursday) published its annual assessment of the quality of health and adult social care in England, which concluded that the sustainability of the adult social care market was “approaching a tipping point”, with examples of care providers starting to hand back contracts to councils because they were “undeliverable” and local authorities warning of more such cases to come.

“The result is that some people are not getting the help they need – which in turn creates problems in other parts of the health and care system, such as overstretched A&E departments or delays in people leaving hospital.”