You are here: Home / Benefits and Poverty / Coffey dodges questions from MPs over benefit deaths 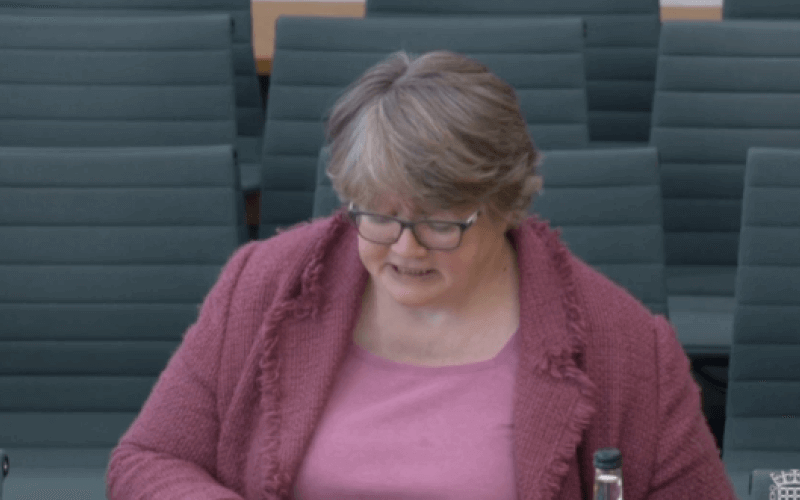 Work and pensions secretary Therese Coffey has been accused of dodging key questions about links between her department and the suicides and other deaths of benefit claimants, during an evidence sessions with MPs.

Coffey repeatedly told members of the Commons work and pensions select committee yesterday (Wednesday) that she could not answer their questions because of ongoing legal actions being taken by the families of claimants who have died, such as Jodey Whiting and Errol Graham.

This allowed her to avoid questions about why the Department for Work and Pensions (DWP) appears to have misled two coroners about a safeguarding review that was supposed to have been completed last year.

But it also meant that she failed to respond to accusations by Labour’s Debbie Abrahams that DWP had shown “no remorse” and had been “blasé” and “defensive” following a coroner’s report into the suicide of Faiza Ahmed, as reported by Disability News Service (DNS) last week.

Abrahams pointed to the lengthy – and continuing – delay in the attorney general making a decision as to whether to give the family of Jodey Whiting permission to ask the courts to order a second inquest into her suicide.

Abrahams also highlighted how the family of Errol Graham, who starved to death after his out-of-work disability benefits were wrongly removed by DWP, only found out that his case would be examined by DWP’s new serious case panel through the media.

Abrahams asked Coffey: “Is this how the state should be treating grieving relatives?”

When Coffey failed to respond to her concerns, Abrahams said: “Three examples of how families have been treated.”

After Coffey again refused to respond to concerns about the treatment of grieving families by DWP, Abrahams said: “I would hope you would want to treat them all with dignity, respect and courtesy, recognising the grief that they are facing, instead of being defensive, showing no remorse and obfuscating, in many people’s minds.”

Coffey finally responded by telling her: “I don’t feel we are being defensive. I feel we have taken a big step forward, a recognition that some things just weren’t working the way they should.”

Also giving evidence to the committee was DWP’s permanent secretary, Peter Schofield, who argued that senior DWP figures had met with a small number of families who had lost relatives in deaths linked to the department’s failures.

Coffey also revealed that DWP had made changes that she believes will improve safeguarding, some of which appear to have been influenced by the publicity in January and February this year surrounding Errol Graham’s death.

Schofield told the meeting that DWP decided on 19 March, at a meeting of its new serious case panel, to introduce new steps it would take before stopping a claimant’s benefits, if the department has lost contact with them.

Last year’s inquest into Errol Graham’s death had heard how it was DWP procedure to go ahead with stopping the benefits of a claimant marked on the system as vulnerable after two failed safeguarding visits.

Letters were sent to Graham in September and October 2017, asking why he had failed to attend a work capability assessment, followed by a telephone call, a text message, and the two visits, but he failed to respond to any of them.

Deprived of all financial support, experiencing significant mental distress and unable or unwilling to seek help, he slowly starved to death.

Schofield said yesterday: “The change now is that if we have tried all of that, we would take that back and have a case conference about the individual, particularly if it is someone with vulnerabilities that we know about.”

These discussions could include other organisations, such as social services and the claimant’s landlord, he said.

If this fails, the case could be passed to new safeguarding leads the department is appointing across the country.

Schofield said: “In that way, what we would seek to do is to provide support, not removal of benefits.

“The approach now is to work not just within the department but to work with all sorts of other agencies, other organisations, to make sure that we understand the vulnerability and the circumstances as best we can before we make any decision like that.”

The family of Errol Graham were yesterday (Wednesday) highly critical of Coffey’s evidence.

Alison Turner, the disabled partner of Graham’s son, said Coffey had given a “bunch of excuses” for not answering key questions.

And she questioned why it had taken DWP 10 years to act to safeguard benefit claimants.

Turner said those changes appeared to have been introduced because of the publicity surrounding the case, first reported by DNS in January.

And she said the changes also appeared to be an admission that DWP had failed to protect claimants in vulnerable situations, like her partner’s father.

She said: “What she has announced should have happened 10 years ago and maybe then Errol would not be dead.”

She said DWP had repeatedly ignored advice to carry out exactly the measures it had now introduced, and she added: “Hundreds of families have suffered because you have ignored them.”

Despite Coffey saying officials had met some families of claimants who have died, Turner said she had never been contacted.

And she criticised Coffey for failing to express any empathy or remorse over Errol Graham’s death during yesterday’s hearing, adding: “I don’t think she cares.

“I was annoyed that she was using the legal case as an excuse to not demonstrate any kind of understanding of what she has put me through.”

The family’s solicitor, Tessa Gregory, from Leigh Day, added: “In her legal case, our client has been calling for urgent changes to be made to the DWP’s safeguarding procedures on the basis that the current policies are unlawful as they fail to adequately protect vulnerable claimants like Errol, but the DWP has repeatedly refused to revise those policies.

“Today’s announcement that the procedures have changed is news to us and news to our client.

“Whilst we cautiously welcome the announcement, it is imperative that the secretary of state publishes the relevant guidance immediately so that our client and the public can see whether it actually requires decision-makers to liaise with different agencies in cases like Errol’s and whether enough has been done to ensure that the vulnerable are adequately protected.”

The family have also released letters sent to DWP by the coroner who heard the inquest into Errol Graham’s death, in which she expresses frustration with the delay in replying to her questions about the safeguarding review, and threatens to “revisit” her original decision not to write a report calling for action from DWP to prevent further deaths.

DWP eventually responded with an update on its progress, but Dr Elizabeth Didcock, deputy coroner for Nottingham and Nottinghamshire, described the “failure to honour the [safeguarding review] timetable which was set out in evidence” at the inquest by DWP as “deeply disappointing”.

Yesterday, Coffey also avoided answering questions about why DWP appeared to have misled both the Information Commissioner’s Office (ICO) and the National Audit Office (NAO) about its failure to keep track of safeguarding improvements recommended by its own secret investigations into the deaths of benefit claimants.

Stephen Timms, the committee’s chair, quoted from evidence passed to him by DNS, which showed DWP had admitted to NAO that it had been failing to track the recommendations, three years after claiming to ICO that it had corrected the same failings.

But Coffey told him: “I don’t know anything about that.”

But she also produced striking new figures which appeared to show that the department began 79 new reviews into suicides, other deaths and other serious incidents related to DWP’s actions in 2019-20.

This would be a huge increase on previous years, as DWP has previously said it carried out 131 of these internal process reviews (IPRs) between June 2015 and January 2020.

There is some confusion over the figure, though, because DWP previously admitted in a freedom of information response to campaigner Lee Jefferson that it had launched just 54 IPRs in the 2019 calendar year, following a change in its procedures which led to it “broadening the range of cases that were considered, including reviewing cases from previous years”.

Coffey also told the committee that she had finally agreed to publish the terms of reference of DWP’s new serious case panel, and minutes of its meetings, although this is not likely to happen until later this summer.

Coffey told the meeting: “I am very conscious that when things go wrong, they can go badly wrong for people. We need to be much more agile in how we pick that up.”