You are here: Home / Transport / Concerns over growing number of ‘dangerous and discriminatory’ road layouts 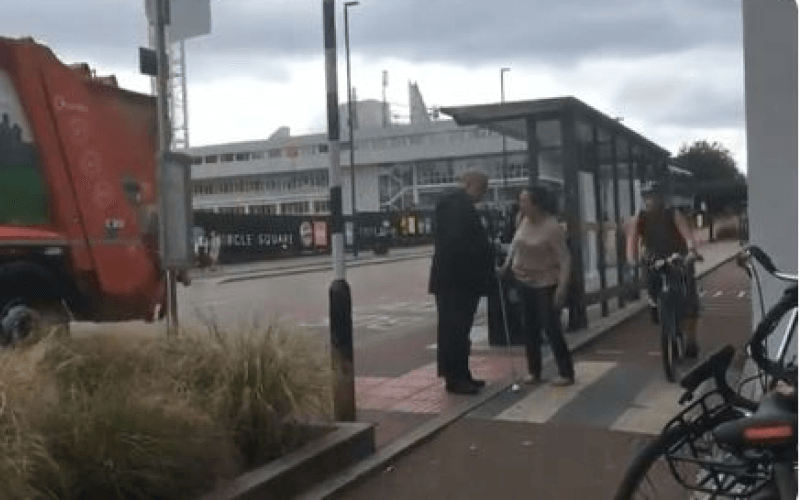 The concerns have been raised by the user-led campaign group National Federation of the Blind of the UK (NFB UK), which has grown increasingly concerned by schemes being introduced across the country.

In Enfield, the council has introduced bus stops that place blind and disabled pedestrians at risk of colliding with cyclists.

The “boarder” bus stops have cycle lanes between the bus stop and the boarding point for the bus.

Sarah Gayton, NFB UK’s shared space coordinator, said: “I was shocked at what I saw in Enfield. I had been told it was bad but had no idea quite how bad it would be.

“Anybody can see the design is flawed and is inherently dangerous.

“The scheme is a disaster for blind people. It is difficult to see how this could have been approved as acceptable.”

In Manchester, the city council plans to introduce more than 30 bus stops in Chorlton as part of a new cycling scheme, including 14 boarder bus stops.

It also plans 17 bus stop “bypasses” or “islands”, which place the bus stop on an island, with pedestrians forced to cross a cycle lane to reach it.

NFB UK points to research carried out by Danish researchers which found that the number of collisions involving passengers entering or exiting a bus rose from five to 73 after bicycle lanes were introduced.

Other Danish research showed two-fifths of bus drivers across five cities in Denmark had witnessed bus passengers involved in collisions at both the types of bus stops.

NFB UK said that it had offered to work with Manchester City Council on the cycling scheme in August 2018 but its offer was not taken up.

It now wants a halt to the introduction of all further bus stop boarders and bypasses across the country.

Many of these schemes include zebra crossings, and cyclists often fail to stop at these crossings, leaving blind and other disabled pedestrians unsure whether they can cross to exit or enter a bus.

Last month, NFB UK filmed a succession of cyclists riding through a zebra crossing introduced as part of a bus stop bypass scheme in Manchester, even though a blind man with a white cane was waiting with his cane on the crossing (pictured).

Gayton said: “Both the bus stop boarders and bypasses really need to halt until we can work together to work out a different solution.”

In Leicester, NFB UK points to the removal of controlled crossings at key junctions, as part of the Connecting Leicester scheme, which it says has made key routes from the train station inaccessible.

Andrew Hodgson, NFB UK’s president, said some of the schemes introduced in London had “created real distress for blind and disabled people”, and that the Enfield scheme was “dangerous and discriminatory”.

NFB UK and the user-led accessible transport campaign organisation Transport for All supported a petition delivered to the prime minister last month by Enfield residents which called for stronger equality laws on the design and re-design of roads.

The petition also calls on the government to force local councils to commission independent equality impact assessments of all road and community re-design proposals and then “to abide by the findings and recommendations of those assessments”.

An Enfield council spokesperson said it “emphatically” rejected the suggestion that it had breached the Equality Act and said that it was “fully committed to equality in everything we do”.

She said the council had engaged with disability organisations including Enfield Disability Action, Guide Dogs for the Blind and Enfield Vision, and had worked directly with the Centre for Accessible Environments.

She said: “We believe that the current design for bus boarders in Enfield does make it clear that pedestrians have right of way.

“In addition, the installation of buffer strips, ramps, signage and distinctive paving all inform cyclists that they are entering an area used by pedestrians and must give priority to pedestrians.

“In our response to NFB UK, we reiterated that as we continue to deliver this programme, we will continue to explore more ways to constructively engage with a range of community groups.

“As part of this, we are interested to hear the views of organisations who represent people who are visually impaired/have particular accessibility requirements.

“This is the case in both informing early design work, and also in listening to any specific issues that are raised post-construction.”

She said that Transport for London (TfL), which funded its Cycle Enfield programme, was conducting a London-wide review of bus stop boarders, and she added: “We will consider any outcomes of this carefully in conjunction with TfL and if appropriate make adjustments.”

A Manchester City Council spokesperson said it was studying more than 1,800 responses to a public consultation on its proposed Manchester to Chorlton walking route and cycleway and would “take them into account before the designs are finalised”.

He said the council, along with Greater Manchester’s cycling and walking commissioner Chris Boardman and Trafford Borough Council, was “committed to providing a walking route and cycleway which is safe and accessible for all road users”.

He said: “We have met with representatives of blind and partially-sighted residents to ensure they had the opportunity to review the designs and provided extra time for them to respond to the consultation.

“We thank them for their valuable input into this process and will take their comments fully into consideration during the process of finalising the designs.”

But he said the council was “not aware of a specific offer from NFB UK to ‘cooperate’ with us on the design of this scheme”.

A Leicester City Council spokesperson said it had met national guidelines in removing the two controlled crossings, which had “significantly reduced the number of vehicles in these locations and their speed”, while alternative pedestrian routes remained available.

She said: “We listen to all comments received on schemes we propose. Ultimately, we have to decide what will be the most sensible solution to achieve a layout where people, not vehicles, dominate.”

She said Leicester’s city mayor, Sir Peter Soulsby, had taken part in a blindfolded walk around the city with local sight loss charity VISTA, which included the two sites, and he was now “considering the concerns raised with him”.

Sir Peter said: “I welcomed the opportunity to walk through the city with representatives of VISTA and a member of [NFB UK].

“While we have done a lot in recent years to make the city centre much more accessible to people with disabilities, it was very useful to find out what barriers and challenges still remain.” 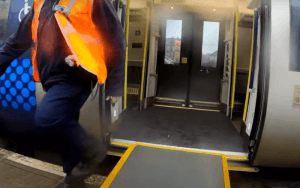