You are here: Home / Benefits and Poverty / Conference hears of ‘democide’, ‘psycho-compulsion’ and suicide risk from benefit system

Mental health survivors and psychologists have joined forces for a conference that has highlighted the extreme damage caused by welfare reform, and has suggested how mental health professionals can help in the fight to improve the benefit system.

The Psychologists and the Benefits System conference in Manchester was organised by clinical psychologist and lecturer Dr Stephen Weatherhead and Joanna, a mental health system survivor, who had been exchanging ideas around the impact of welfare reform for the last two years.

The conference – sub-titled Time To Get Off The Fence – featured presentations by both academics and campaigners, including a workshop to help psychologists write letters for service-users needing access to support such as benefits.

One of the presentations was delivered by Joy Hibbins, founder of Suicide Crisis, a charity in Gloucestershire which runs a crisis centre that is open to anyone in the county who is feeling suicidal.

Hibbins, herself a mental health system survivor, talked about the impact of the benefits system on some of her clients.

She described how for one client, Sam*, the risk of suicide “rose sharply the day before his appeal over withdrawal of benefits”.

“His suicidal thoughts had been triggered originally by the traumatic death of his partner.

“However, the prospect of the loss of benefits was a final trigger, when he was already vulnerable, mentally unwell and destabilised by recent trauma.”

For another client, Julia – who had emotionally unstable personality disorder (EUPD) and faced a reassessment every year for employment and support allowance (ESA) – the fear of losing benefits caused her suicide risk “to rocket”.

When she heard that her ESA claim had been successful, said Hibbins, “her immediate reaction was not relief, but fear and distress that she would have to go through it all again next year.

“She is now trying to bring together a group of people with EUPD so that they can meet with Department for Work and Pensions (DWP) officials to explain the impact of these annual assessments on them.”

She told the conference that DWP officials had always listened when the centre explained the impact of losing their benefits on its clients, and eventually either reinstated or maintained those benefits.

But she said this left her and her colleagues “extremely concerned” for benefit claimants who do not have the support of a centre like hers.

She said: “We know how at risk some of our clients have been and if they hadn’t had support and advocacy, they may well have ended their lives.”

Disabled activist Rick Burgess spoke about “democide”, the idea that actions by a government can cause harm or even death, but often go undefined and unchallenged because the perpetrator is the state.

He said this illustrated what had happened to disabled people in the UK over the last decade through welfare reform, with the ideas of “malingering and illness deception” becoming mainstream, and eventually party and government policy, leading to the “surreal situation of people dying daily, of the same ‘errors’ and ‘failings’ repeating daily over many years”.

Burgess (pictured) said that “an ‘accident’ that keeps repeating, every day, every week, every month, every year” while there were people able to stop it from happening who instead allowed it to continue, was “not a failure, neglect or an accident” but “the product of policy”.

He said: “When other legislative changes contribute towards this outcome, when assessments of cumulative impact are refused, when information is denied and when voices are silenced that is a pattern that reveals a strategy.

“Set amidst a global consensus on reducing state spending and support, with governments choosing to make a decision [on] which sectors of the population will lose support, this becomes an inevitable expression of democide.”

He said this process had been assisted by the actions of doctors, lawyers, administrators, journalists and judges.

He added: “The removal of normal legal redress, the limiting of charity dissent and simultaneous involvement of the third sector and the provision of a tortuous appeal system give the veneer of due process while delivering a reality of brutal denial of rights, up to and including the right to life.”

He told the conference that those involved in the system, particularly health professionals, needed to “rediscover their ethical duties” by boycotting DWP, helping claimants with their claims, and encouraging other professionals to follow the same course of action.

Dr Brigit McWade, from Lancaster University, spoke about her research with professor Imogen Tyler into how neoliberal governments – including the UK’s – stigmatised benefit claimants in order to justify their welfare reforms and privatisation agenda.

She told the conference that Conservative ministers responsible for recent UK welfare reform, including Iain Duncan Smith, believe that the social security system produces “a culture of dependency, and a poverty trap”.

And she pointed to research by Friedli and Stearn that showed how psychologists had been recruited into the social security system to help DWP identify “psychological barriers to gaining employment”, punish benefit claimants for failing to comply with the system, and attempt to foster attributes and attitudes that DWP believed would increase their “employability”.

In this way, psychologists were supporting DWP’s focus on changing the individual’s behaviour rather than the social barriers they faced, she said.

Claimants who failed to conform were subjected to “psycho-compulsive regimes that seek to re-condition” them and remove their benefits “through sanctions designed to punish the poor”.

She told the conference that welfare reform policy had become “an act of war on an internal enemy of the government’s own creation”.

Weatherhead, who is also based at Lancaster University, said after the conference that the event had provided information for psychologists on how to improve support for benefit claimants, while also drawing attention to some of the flaws in the system.

He told Disability News Service: “The key issue we wanted to address was that the WCA is not up to scratch, and we need to get rid of sanctions.

“Sanctions don’t work from a psychological perspective and target people already in financial straits and are just cruel to the most vulnerable groups in our society.”

Weatherhead is now hoping that other such conferences will take place around the country, again involving both psychologists and service-users.

He is also working with mental health survivors on a 24-hour vigil that will coincide with next year’s BPS annual conference, and will “raise support and awareness of all the people whose mental health has been affected by the benefits system, particularly those who have died”.

He is hoping that he and other campaigners will persuade BPS to hold a session at the annual conference on the benefits system, the use of psycho-compulsion, and the ethics of psychologists working for DWP.

Last year, he organised Walk the Talk, in which a group of psychologists walked 100 miles from British Psychological Society (BPS) offices in Leicester to BPS offices in London to raise awareness of social policies that are leading to psychological distress, such as benefit sanctions and the “fit for work” system, as well as homelessness and food poverty.

He can be contacted by email at [email protected] or on Twitter at @steweatherhead. 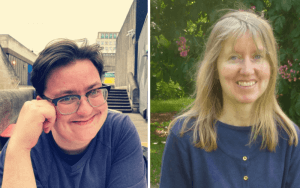