You are here: Home / Benefits and Poverty / Conservative conference: Coffey says merging PIP with universal credit is ‘on the table’ 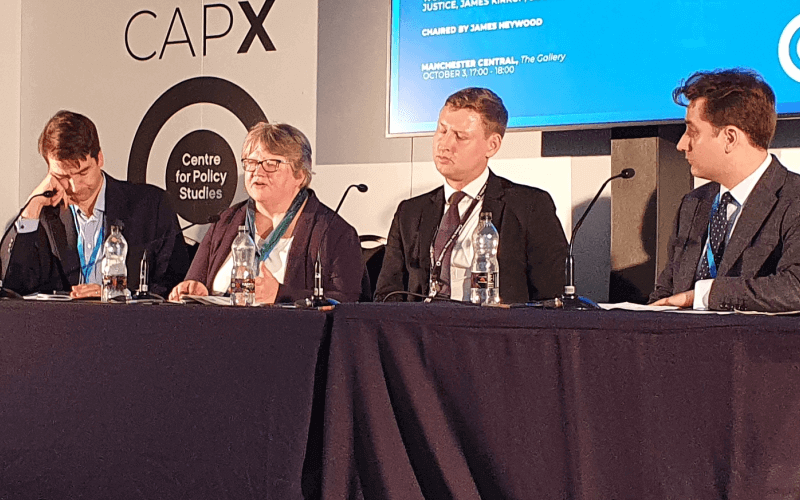 The possibility of merging personal independence payment (PIP) with universal credit is “on the table” as part of a fresh wave of social security reforms, work and pensions secretary Therese Coffey has admitted.

In response to a question from Disability News Service (DNS) at the Conservative party conference in Manchester, Coffey twice refused to rule out the possibility of bringing the two benefits together.

DNS had asked her about suggestions of a merger between means-tested universal credit and non-means-tested PIP, raised in July’s disability benefits green paper.

Responding to the question, she initially spoke about a pilot project on productivity in work, but then conceded that “everything is on the table is the best way of saying it, because the green paper is quite broad and we want to get some focus on genuine innovative thinking”.

She added: “Are these benefits actually working? That’s the question I often say past my officials.

“Are they having the intended desire? And if not, what are we going to do about that?

“Or is there something that we can have [that is] better… in that regard.”

Asked again by DNS if she could confirm that she was not ruling out folding PIP into the universal credit system, she declined to do so.

She said instead that the reforms were about “the broader outcome of… improving processes, but also how we encourage and reduce the disability employment gap”.

PIP is paid to disabled people both in and out of work, is not means-tested, and is supposed to contribute towards the extra impairment-related costs they face.

The fringe event was hosted by The Centre for Policy Studies, the right-wing thinktank co-founded by Margaret Thatcher.

Coffey also made repeated references during the event to the need to cut spending on disability benefits, particularly PIP, which again was discussed in the green paper.

She said that “probably” the biggest increase in benefits spending had been on “health benefits”, while PIP had “grown in a way that was not anticipated when it was introduced”.

She said that three out of four young people who claim PIP – a total of 189,000 – state that their primary reason is their mental health.

Coffey appeared to suggest that reducing the number of young people in mental distress claiming PIP would help more people “think of the benefit system as fair”.

She said that targeting PIP on “people who really need that support” may improve the “public perception” that the system is fair.

But James Kirkup, director of the Social Market Foundation thinktank, and former political editor of the Daily Telegraph, blamed the media and its use of words such as “feckless, idle, workshy” to describe benefit claimants, as well as the rhetoric of an “earlier generation of politicians”, such as George Osborne.

He said: “There has been a problem with the way we all collectively, media and politicians, talk about welfare.”