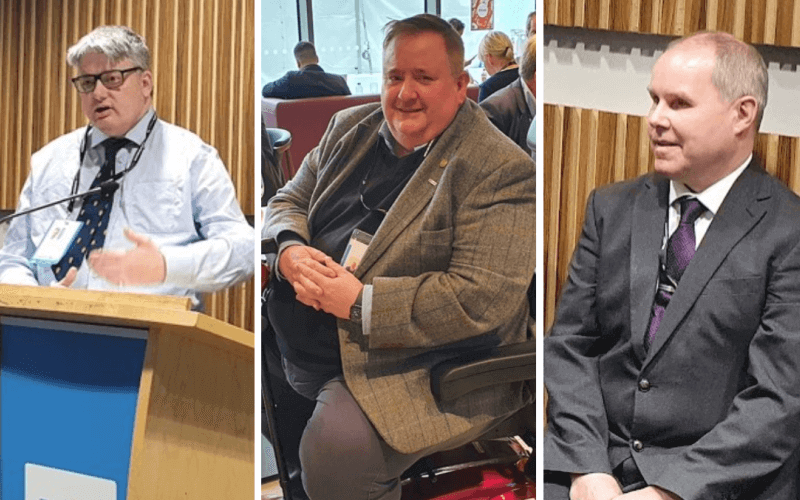 Leading disabled members of the Conservative party have raised concerns over possible government plans to make further cuts to benefits and public spending.

Speaking at the party conference in Birmingham, they expressed alarm at the possibility of further cuts to support for disabled people so soon after the decade of austerity that led up to the pandemic.

Although most disabled members appeared to welcome the chancellor’s decision to scrap his plans to abolish the 45p top rate of income tax, there have been growing concerns this week over reports that Kwasi Kwarteng and prime minister Liz Truss do not want to uprate benefits by the full rate of inflation next April.

But some disabled party members insisted that the chancellor was on the right track, and one blamed opponents within the party for sabotaging last week’s mini-budget.

Barry Ginley, chair of the Conservative Disability Group (CDG), told Disability News Service (DNS) that he was concerned at reports of further cuts to benefits and other public services that affect disabled people.

Ginley wrote in August to Truss, and her opponent Rishi Sunak, when they were fighting to win the party leadership, asking them to focus on issues including the need to “make it a priority to help disabled people with low incomes receive assistance with rising bills”.

He said this week: “The CDG will continue to press government to ensure no benefits are cut and disabled people receive the support required.”

He pointed to a pledge to DNS this week from the new minister for disabled people, Claire Coutinho (see separate story), that disability benefits such as personal independence payment, disability living allowance and attendance allowance would continue to be uprated next April by the full rate of inflation*.

He said he hoped that guarantee would be kept.

Ginley said he had not believed a mini-budget had been necessary. “I do believe in tax cuts to put more money into people’s pockets, especially for people on low income, but this isn’t the time to do so.

“I would have felt more comfortable for any tax cuts when the Office for Budget Responsibility would have had time to assess the economic impacts and how the economy can be balanced.”

He added: “As a disability-led organisation with a breadth of lived experience of disability, the CDG has a wide demographic in our membership, and we are not all from the wealthy side of the party.

“I would ask the government to prioritise disabled people, as often we are the people who are most affected in any cuts or can often be forgotten when policy decisions are being made.

“I would urge the government to engage with disability organisations, to hear what disabled people need to get them through such difficult times.

“The CDG will be looking to meet with ministers to ensure that we are not forgotten, and we receive the necessary support.”

Cllr Charles Fifield, a CDG executive member, and a member of Cheshire West and Chester Council, told the group’s fringe meeting that he agreed with calls for the government to do more for disabled people, which had been made by speakers from the disability charities Scope and Mencap.

Scope’s Louise Rubin had said that “a lot of disabled people have felt abandoned by this government, particularly during Covid, also now during this cost-of-living crisis”, that the current crisis was “hitting disabled people hard”, and that the benefits system “simply doesn’t provide enough money to live on”.

Mencap’s Ismail Kaji said the government had not done enough to help disabled people who were “already having to choose between food and heat”.

Fifield told the fringe meeting on Sunday after they had spoken: “What I’ve just heard from the two previous speakers, I agree with everything that they have said.”

He later confirmed to DNS that he agreed with the general concerns they had raised.

Other disabled party members were less concerned about the possibility of further cuts.

Political commentator and radio presenter Stephen Carlton-Woods said he had been happy with the idea of scrapping the 45p income tax rate, and he was critical of the decision to abandon that policy, blaming “toxic” elements in his own party.

He said: “This conference is about this party coming together and uniting. They have just thrown a spanner in the works. It’s not helping the party.”

He said he was “not at all” concerned about possible cuts to public spending, and with the possibility that means-tested benefits might rise by much less than the rate of inflation.

He said: “No-one is comfortable with austerity, but we do recognise that you have to pay your bills sometimes.

“The reasoning behind it, yes, I am on board with it. You have to be pragmatic.”

Carlton-Woods said it was “inevitable” that some of the cuts to public services would affect disabled people.

He said: “We have got to balance the books at some stage. I heavily sympathise with people in that situation and that’s why I do the charity work that I do.”

But he added: “The government have a duty to balance the books.”

Another disabled party member was also supportive of the chancellor.

Cllr Joanne Howey, a member of the Conservative group on Durham County Council, said that – other than the “mistake” of suggesting the 45p income tax rate should be scrapped – the mini-budget had been “quite good”.

Asked about reports that the chancellor will not give public services any further funding this year to make up for the steep rise in inflation, she said: “I still think there is a lot of money if people know where to go.”

Howey said Kwarteng had not been given enough time, despite the error with the 45p tax rate, and she wanted to see his full fiscal plan, now expected later this month.

She said: “I don’t think we have given him enough time. The 45 per cent [abolition] was a mistake. The one per cent off [the basic rate of income tax] is going to help; we will start growing again.

“We are still not back after Covid. It’s a really difficult situation.”

Asked if she would be comfortable with the government not increasing means-tested benefits such as universal credit (UC) and employment and support allowance by the full rate of inflation next April, she said she was most concerned about “the working poor”.

She said: “I know a lot of people working on that bread line on UC… they really are struggling at the moment. It’s the working poor that are really, really struggling.”

Asked if she was more concerned about the working poor than those not in work, she said: “At the minute, I am. I help in food banks. I see what’s going on.”

She said she would be “a little bit concerned” if UC did not rise by the full rate of inflation next April.

Another disabled party member, who asked not to be named, said: “I have faith that it will work but they do need to always keep disabled people in mind.

“They do need to make life more accessible. They need to make sure that disabled people can pay for heating and carers.”

Asked if he would be concerned at further spending cuts, he declined to comment further.

Another disabled party member, a borough councillor, was also reluctant to be interviewed, twice giving excuses for not answering questions from DNS.

DWP to spend ‘shocking’ £3.4 million on jobs website in just one year