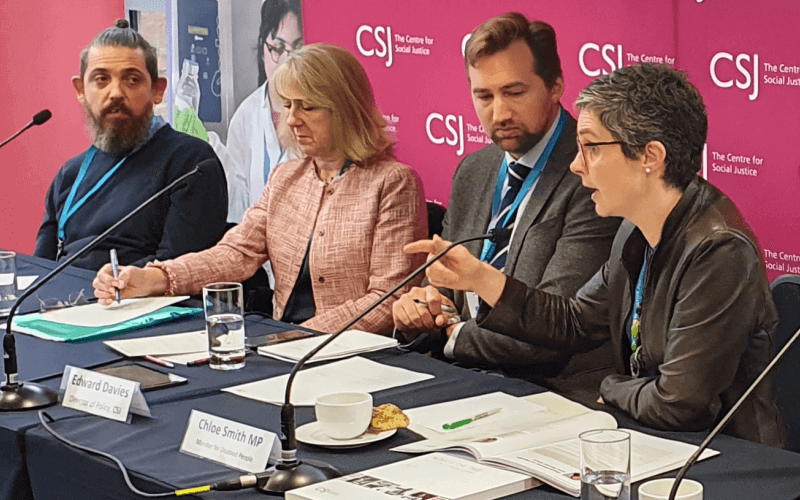 The new minister for disabled people has refused to comment on figures that show how spending on Access to Work (AtW) plummeted during the pandemic, despite ministers plugging the programme during this week’s Conservative party conference.

Chloe Smith highlighted the scheme at two fringe meetings at the conference in Manchester, as part of the clear focus of ministers – including work and pensions secretary Therese Coffey (see separate story) – on policies that will try to push more disabled people with high support needs towards work.

Coffey had pointed to AtW as a way to encourage disabled people with high support needs who “right now think they cannot work” to instead “see what is it that you can do”.

But when Disability News Service (DNS) asked Smith if she was aware of the drop in AtW spending and what she thought the reason for it was, she said she would answer the question through the Department for Work and Pensions (DWP) press office.

DNS pointed out that this appeared to be asking the DWP press office to breach Civil Service rules, which state that “impartial civil servants should not be asked to attend or take part in party conferences with their minister”, because of the political nature of such events.

But instead of admitting her apparent error, Smith (pictured, right) claimed that the question was only political because it was being asked at a party conference.

Despite highlighting the AtW scheme at the conference, and pushing it as part of her party’s policies on disability employment, Smith insisted that asking her if she was aware of the drop in AtW spending and what she thought was the reason for the fall was not an “inherently political” question.

Asked if she was not aware that AtW spending had plummeted during the pandemic, she said: “We haven’t the figures in front of us, so we’ll do it that way [through the DWP press office].

When asked to confirm if this meant that she had been unaware of the figures, she accused DNS of “going down a rabbit hole”.

Guidance published by the Government Communication Service states clearly that government press officers must “insist that all political aspects are handled by the party political press office or special adviser”.

It also states: “Ministers must be protected from accusations of using public resources for party political purposes…”

Smith’s comments came after a fringe meeting hosted by the disability charity Scope and the Centre for Social Justice.

During the meeting, she expressed support for the social model of disability, which she said was an “important component” of the government’s thinking on disability employment, and “expresses that people perhaps should not be seen as disabled in themselves but are held back by the world around them”.

In answer to a question from DNS about how her understanding of the social model would affect her work in this area, she said: “I very much agree with that school of thought and the practical answer to it is that the National Disability Strategy and the rest of the work that we are doing goes broad and deep precisely to be able to meet those kinds of challenges.”

She also told the meeting that her dual role – as both a DWP minister and as head of the Disability Unit in the Cabinet Office – meant she was “sitting next door to the prime minister”, which gave her “the right and the ability to crack the heads together, and that is what we are doing in order to deliver the very many commitments in the National Disability Strategy”.

Smith said her experience of recovering from breast cancer in the last year would be helpful as she approached her brief.

But she also repeated the misleading statement that her predecessor, Justin Tomlinson, stated on many occasions, that the government had cut the disability employment gap by about five percentage points over the last seven years.

In fact, ministers have been told repeatedly by academics and others that Office for National Statistics data shows that the apparent fall in the gap is only due to an increasing proportion of people self-identifying as disabled.

Smith also stressed that the government needed to focus on regional differences in employment rates among disabled people in different parts of the country.

Smith, who grew up in rural Norfolk, told the meeting: “I really think there is a whole level to go into in terms of where disability employment is thriving and flourishing in this country and some places where it is not, and what are the drivers of that, geographical, social and economic, and how can we improve those.”

The meeting also heard from Richard Luke (pictured, left), Scope’s information officer for cerebral palsy, who spoke of his own employment experiences as a disabled person.

He said: “I believe that many companies and businesses are open to employing disabled people, but they are reluctant because of the perceived extra costs.”

He said most businesses did not know about the Access to Work scheme, although he also pointed out that it can be “less than perfect”, with claims “processed slowly” and lost receipts.

But he said: “Nobody can make use of a scheme that they don’t know exists.”

He also said that developments in technology during the pandemic that have allowed non-disabled people to work from home, have “also allowed disabled people to manage their conditions more effectively, meaning they are not running on empty”.

He said: “There is the potential to open the world of work to a new generation of highly-educated, talented and motivated disabled people, which can only be of benefit to the economy, to business and to the individual.

“Let’s not turn the clock back.”

Neither DWP nor the Cabinet Office had criticised Smith’s actions by noon today (Thursday), but neither had been able to explain why they were apparently not concerned by her attempt to enlist the DWP press office in protecting her political reputation.

A DWP spokesperson said: “Access to Work is a DWP policy and any queries on it DWP press office would therefore handle.”

A Cabinet Office spokesperson said: “I obviously cannot comment on your conversation with the minister, but any government minister is allowed to refer a journalist to their press office if asked about government policy.”

He had not responded to a request to clarify this position by noon today.

A Conservative party spokesperson said: “This is a matter for the DWP press office.

“I understand you asked at conference, but it’s a DWP policy matter.”