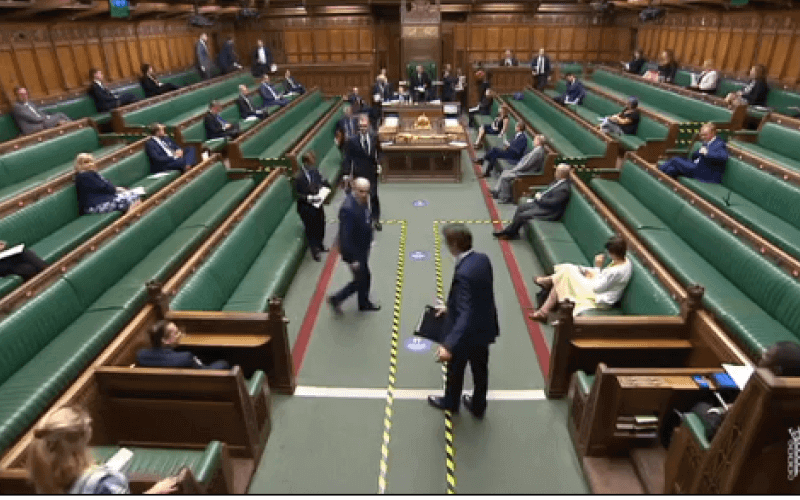 A government agency has refused to apologise after issuing misleading information about the risks faced by people with diabetes who return to their workplace during the coronavirus pandemic.

Public Health England (PHE) already faced questions over why it apparently told the House of Commons speaker – Sir Lindsay Hoyle, who has type one diabetes – that he could safely continue to work in parliament because he was under 70 (he is 62) and had no other underlying health conditions.

This advice appears to conflict with the government’s official guidance, updated this week, which stresses that people with diabetes are “clinically vulnerable” to COVID-19.

It also conflicts with recent NHS figures which have shown that almost one in three people who have died with COVID-19 in hospital in England had diabetes.

And this week, when Disability News Service (DNS) raised fresh concerns about the advice PHE had given the speaker, a spokesperson said: “The government guidance on returning to work does not preclude vulnerable groups from working but says they should take particular care to minimise contact with others outside their households.”

In fact, the guidance says that people with diabetes are “advised to stay at home as much as possible and, if you do go out, take particular care to minimise contact with others outside your household”.

When the PHE spokesperson was asked why his statement ignored the crucial first part of the advice, he quoted again from the government guidance, this time by quoting advice issued to everyone – and not just those with health conditions – that you “should go to work if you cannot work from home and your business has not been required to close by law”.

PHE had refused to apologise for its misleading information by noon today (Thursday).

They have warned that employers could use his case as a reason to force people with diabetes back into the workplace when they are still trying to shelter at home from the virus.

There was also criticism from the disabled crossbench peer Baroness [Jane] Campbell, who said the speaker was “foolish” for continuing to work in parliament, rather than working from home like other MPs and peers who are shielding from the virus.

Those risks were highlighted yesterday (Wednesday) when business secretary Alok Sharma had to be tested for coronavirus.

He is now said to be self-isolating at home after becoming unwell while speaking in the Commons chamber.

Theresa, who has type one diabetes – like the speaker – told Disability News Service this week that she was “very concerned” to hear of his actions.

She said: “I have type one diabetes and have been working safely and effectively at home.

“My employer is great but this is extremely anxiety-provoking as it could cause pressure for me and many others to return to unsafe environments.”

She added: “I’m not convinced the public are all following social distancing and it doesn’t feel safe to do more than go for a walk locally so that’s all I’m doing.”

Jon, who is autistic and has type two diabetes, said he feared the speaker’s actions would persuade other people with diabetes to return to the workplace too soon, particularly because of the “startling lack of clarity” from the government on what they should do.

And he said it was “a huge worry” that employers would use the speaker’s example to force staff with diabetes back to work by telling them: “Other people are doing it so why shouldn’t you?”

Jon, who works as an autism advocate on the south coast, said: “I can see some employers would use that.

“This isn’t about whether you might get a bad cold. You might die. There’s a clear and present danger.”

He and his wife have spent 98 per cent of their time indoors since lockdown began in March, he said, and at one stage did not leave the house for several weeks because he was so scared by the number of people he saw on the streets.

In the last couple of weeks, they had slowly begun taking early morning walks to a local cemetery, but even stopped that this week because they saw that people appeared to have “given up social distancing”.

Jon said the government’s actions during the pandemic made him feel “as if we don’t count”.

He added: “It makes me feel as if I am a sacrifice, an experiment.”

“Diabetics are at greater risk from the flu and my diabetic consultant was concerned enough to send me to hospital, where I stayed for two-and-a-half weeks on a drip.

“There’s no jab for this novel virus, which is proving to be worse than the flu, so I think it’s dangerous for the speaker to go back to work.”

He said he was concerned that the speaker’s actions might encourage other people with diabetes to return to their workplace too soon, and that they might help employers force staff with diabetes back to work when it was not safe.

He said: “I am concerned that the speaker’s actions may cause both of those things to happen.”

Since DNS spoke this week to these three people with diabetes, it has also emerged that the former prime minister, Theresa May, who has type one diabetes, attended parliament yesterday to criticise the government’s proposed 14-day quarantine for new arrivals to the UK.

And Diane Abbott, who has type two diabetes, voted in person in parliament on Tuesday so she could oppose the government’s plans to end the hybrid arrangements that previously allowed some MPs to attend parliament and others to take part in debates online and use an online system to vote from the safety of their own homes.

Vicky Foxcroft, Labour’s shadow minister for disabled people, who has herself been shielding since the start of the crisis, and whose partner has type one diabetes, called on the government to produce detailed figures so that people with diabetes in different situations can assess their own risk.

She declined to comment on the speaker’s actions, but she said: “I worry for his health and want him to stay safe.”

Foxcroft, who has accused the government of discriminating against her by not allowing her and other shielding MPs to vote and take part in debates from home (see separate story), was due to speak to the charity Diabetes UK yesterday (Wednesday).

Baroness [Jane] Campbell, a disabled crossbench MP, said the speaker’s actions made her “uncomfortable” and said that his apparent belief that he was being brave by continuing to work in parliament during the pandemic was “foolish”.

She added: “He is also not showing any support for Vicky Foxcroft, who is doing the right thing by staying away.

“Those of us who would be at risk if we went to Westminster, should be allowed to remotely work – as I am and many others in the House of Lords.

“That is not only possible, it is risk free and focuses the mind.”

A spokesperson for the speaker said: “Mr Speaker has been very honest about his diabetes – that it is managed, that he is fit and well, that he is under 70 and has no other morbidity issues.

“He is a designated key worker who cannot work from home.

“Each person has to make a decision which is right for them based on their own medical advice. He can only speak for his own situation.

“Mr Speaker strongly believes that hybrid proceedings should continue for MPs who are shielding, vulnerable or have caring responsibilities to enable them to take part in Commons proceedings remotely.

“He has been in regular contact with the government in the hope that agreement can be reached on a way forward that is inclusive to all members.”

Picture: The Commons chamber yesterday, with Sir Lindsay Hoyle in the speaker’s chair