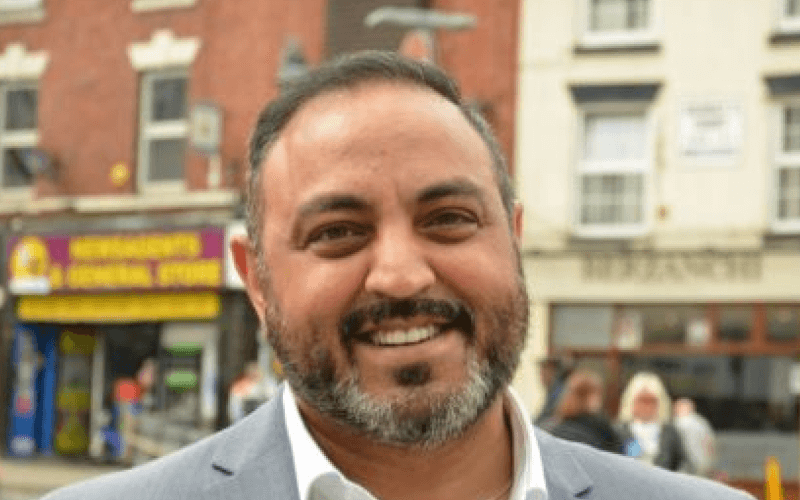 A disabled politician has described the equality training given to fellow councillors as “a joke” after a Liberal Democrat rival was forced to apologise for posting a message on social media that accused him of using his impairment for political purposes.

Naitta said in a Facebook post to his supporters: “This one uses his disability, get rid of labour in Blagreaves ward.”

Raju (pictured) is the only Labour councillor in the ward. The other two are Liberal Democrats.

The comment was reported to the council by Disability Direct trustees, after they told Raju they were “totally outraged” by the comment and its possible impact on disabled people who want to stand for election.

Now a council investigation has led to Naitta being forced to apologise in writing to Raju, and post an apology on Facebook for the comment which he said “suggested that another councillor used his disability for political purposes”.

Naitta added: “I fully accept that this comment was wrong and I should not have made it.

“It was made in haste and was withdrawn soon afterwards but I know people did view it.”

Raju said he believed that such targeted comments could deter other disabled people from entering politics, and he has called for the council to improve the disability equality training offered to councillors.

He said: “Equality training is just sitting in front of a computer and doing some e-learning, which I think is a joke. I have done it and it’s a joke.”

He added: “There is a principle here that we should be encouraging more disabled people to stand for election. These kinds of comments deter disabled people.”

He described Naitta’s comment as “an ignorant and opportunistic attack on my character”.

He said: “I have been a councillor for just under four years, CEO of Disability Direct over 20 years and have had cerebral palsy all my life.

“Yet not in any instance have I taken advantage of the latter.”

Raju said he stood for office because he believed there should be more disabled people in politics, according to the principle of “nothing about us without us”.

An Equality and Human Rights Commission spokesperson said: “It is essential to a healthy democracy that everyone has the right to participate fully in all aspects of political life.

“We all have a responsibility to treat people with dignity and respect, and political parties and governments need to ensure that our elected representatives are protected from abuse so that our political system truly reflects the diversity of our society.”

A Derby City Council spokesperson said: “A complaint was received last year, and handled by the council’s monitoring officer at the time.

“Subsequently, the complaint was brought to the standards committee, who reviewed the case at their meeting in February.

“This item was exempt from the press and public, and remains so.

“The complaint was resolved internally, however if Cllr Raju wishes to take this further, he can do so with the relevant authority.

“Our training for colleagues and members, which is delivered online, is regularly reviewed and updated based on current legislation and best practice.

“We won’t tolerate any form of discrimination at Derby City Council, and encourage our colleagues and members to report any such instances.”

Naitta had failed to comment on his apology by noon today (Thursday).