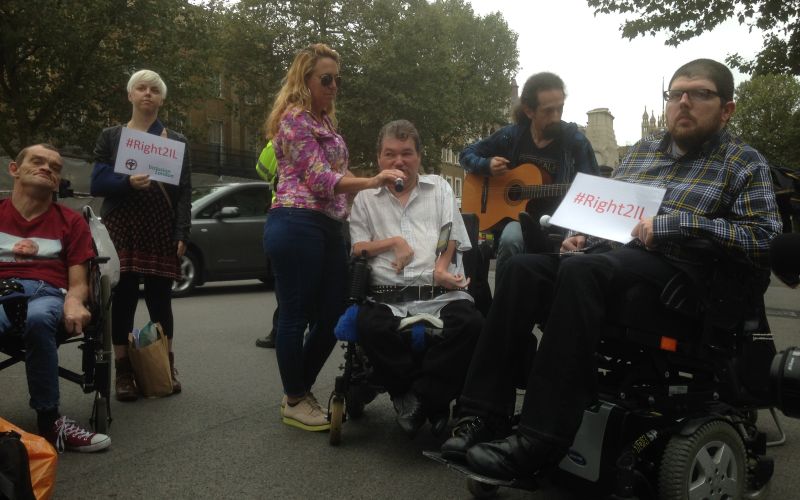 A disabled woman has told how her local council is threatening to spend several days watching her every move as she eats showers and uses the toilet, in order to check if planned cuts to her care package will meet her needs.

The woman, Jane*, a survivor of serious sexual, physical and emotional abuse, and a former Independent Living Fund (ILF) recipient, spoke about the council’s “violation” at a parliamentary campaign meeting this week.

The meeting was held to launch Inclusion London’s report on the impact of last year’s ILF closure, as part of the Rights Not Games week of action organised by Disabled People Against Cuts (DPAC)**.

The report, One Year On: Evaluating The Impact Of The Closure Of The Independent Living Fund, includes information from all 33 London local authorities, and concludes that there has been a “dramatic postcode lottery” in the support provided to former ILF recipients since the fund closed.

In four local authority areas, more than half of former ILF recipients have had their care packages cut since it closed.

In all, at least 185 former ILF recipients have so far seen their support cut, out of a total of about 1,300 across London.

The report calls for a national, needs-led system of support, independent of local authorities, free at the point of delivery and paid for through taxation.

Jane told the meeting, which was hosted by Labour shadow chancellor John McDonnell, that as an ILF recipient she had received 84 hours of support a week (including 35 paid for by the council), but the local authority wanted to cut this by 46 hours a week.

The 84 hours support – together with unpaid care provided by her personal assistants that means she is supported almost 24 hours a day – has enabled her to participate in her local community, chair three disability organisations, and even attend the Glastonbury festival to deliver a talk about disability rights.

After the ILF closure, her council initially wanted to cut her care from 12 to three hours a day, but is now suggesting a package of 38 hours a week.

It has already suggested that she could survive on microwave meals – which she says would both damage her health and be unaffordable – and use incontinence pads for up to 12 hours a day.

But at the last meeting with council officials earlier this summer, she was told that once the cuts to her package were in place, they wanted to send a team of people to observe the impact on how she uses the toilet, showers, gets in and out of bed and her wheelchair, and feeds herself.

She was in tears as she told this week’s parliamentary meeting: “That really breaks me. I can’t bear the thought of having a team of people invade my privacy, come to my toilet, my bedroom.

“It was bad enough when they suggested I use nappies, incontinence pads; to feel so violated in the name of saving money… I want every single person to stand up and stop this.”

She had earlier described in a post on DPAC’s website that such action would be an “incredible, humiliating, dehumanising invasion of my privacy and home” and a “stripping away of every last vestige of my dignity”.

Jane said this made her feel like “a goldfish in a bowl, lacking privacy, freedom, spontaneity, rights, dignity; dreading when the plug is going to be pulled by people who think it’s okay to leave one without the funds and care and mobility support which keep me afloat”.

She told Disability News Service after the meeting: “When they cut, these cuts will be hurting people who are already struggling. It is so inhuman.

“They don’t consider the mental and psychological effects of what they are doing, let alone the physical.

“It is torture that they are putting people through and it can be so far-reaching. They have no idea of what people are living with.”