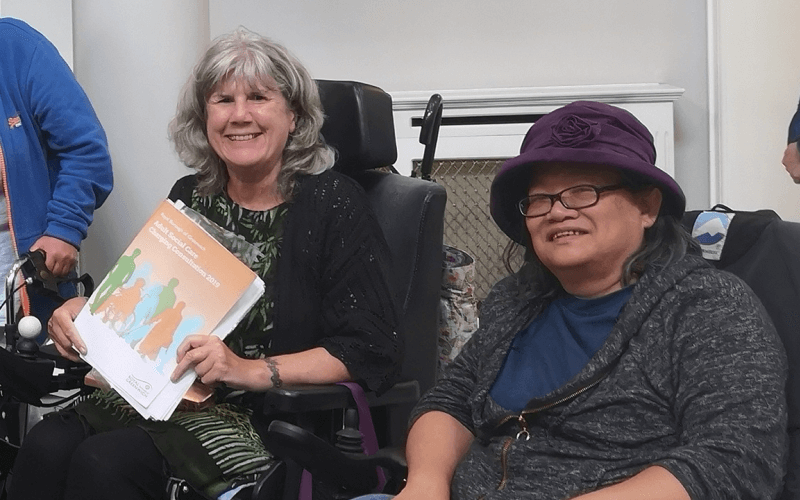 Leading disabled campaigners have warned that a council’s proposals to increase care charges will force them and others to quit their jobs and stop their volunteering work, and will push many others into poverty.

One influential campaigner warned that she could be forced to reduce her care from 63 hours a week to just seven, and might have to consider residential care, if Greenwich council goes ahead with its plans.

Another said the Labour-run council’s changes could force her to quit her job with a disabled people’s organisation in another London borough.

A third disabled resident said she feared she would have to quit her work as a self-employed consultant, and her campaigning work with organisations such as Disabled People Against Cuts (DPAC), if the council presses ahead with its plans.

Another Greenwich resident, Fred Williams, who receives 38 hours of support a week, said he would refuse to pay any new charges imposed on him by the council.

He has been refusing to pay all care charges requested by Greenwich council since 1995, when new laws on charging were introduced by the Conservative government.

Williams plans to take legal action against the council if it continues with its proposals.

He said they could even prove fatal for some disabled people in the borough, many of whom have already experienced cuts through the introduction of universal credit and personal independence payment.

He said: “For many, it will mean a loss of care, they won’t be able to afford the extra charges, it will end up being a choice of food, heating or paying for the little care they can afford. In time, this could be fatal.

“Is Greenwich council going to take full responsibility for these deaths?”

Among 11 proposals, Greenwich council wants to increase the hourly rate it charges for home care; force recipients of the higher rate of disability benefits to contribute more towards their care; remove subsidies for delivery of frozen ready meals; remove its cap on charges for home care; and increase charges for service-users with savings of between £14,250 and £23,250.

The council’s own equality impact assessment of its proposals warned there was a “risk of impacting on income of most severely disabled people”.

Another disabled resident, Kate Brown, in an open letter to the council that was supported by the grassroots group WinVisible, has said that her charges would increase from £65 per week to £105 per week or more.

She said in the letter: “This sounds overdramatic, but if I had to cut down to pay the extra, it would be on food, or the clothes and bedding that I need as I am double incontinent.”

She has already seen her support package cut from 168 hours to 27.5 hours a week, following the closure of the Independent Living Fund in 2015.

Greenwich is just the latest local authority to announce plans to increase charges or restrict access to care and support, as the government continues to delay publication of its long-awaited green paper on how to deal with the adult social care funding crisis.

Anne Novis (pictured, left, holding a consultation document on the proposals), who chairs Inclusion London, and received a commendation from the Metropolitan police only last month for her work as an independent advisor to the force, said she was likely to have to quit both those voluntary positions if the council’s proposals went ahead.

Because she was left some money when her mother died, Novis will be hit hard by the reduction on the cap in charges. She is set to lose support worth £3,500 a month.

She said: “If that is removed as proposed, I will have to pay for all my care, an impossible request if I am to live.”

Within a year, she fears she will be forced to claim housing benefit and will probably be hit by the bedroom tax, because of the lack of smaller accessible properties in the borough.

She said: “If they remove the cap, I will be faced with paying all of it or the cheaper option of going into a care home.”

Another option is to cut her care from 63 hours a week to one hour a day, which would still cost more than £300 a month.

She said: “I will not be able to do anything. My life just comes to existing, not living, not contributing to all the things I do. That’s what people need to hear about.”

She added: “I fear I will end up in hospital, as I will not be able to afford the care I have been assessed as needing.”

Novis said the council’s plans would “push all service users into more poverty”, because they are already struggling with the benefits freeze and increased living costs.

Jenny Hurst, another well-known disabled campaigner and Greenwich resident, told Disability News Service that she fears the care charge changes could force her to quit her job – supporting disabled people being assessed for care in another borough – and rely instead on benefits.

She said the Greenwich consultation document says people will only be charged what they can afford.

But she said: “I support people on a regular basis with little or no savings, some with not a penny to their name, who are in debt and struggling to afford household bills and food on a week by week basis who are told [by their council] that they can afford over £100 a week towards their care.

“Calculations are done according to a standard formula, using figures from the government, with minor tweaks… not considering the person’s actual living costs.

“They have all been told that, according to the government’s calculations, they can afford to pay towards their care. The reality for them is that they can’t.

“Greenwich’s consultation document shows that Greenwich will also be following the same government figures in the calculations.”

She added: “People should not have to pay for support to do the most basic tasks that non-disabled people take for granted.”

Eleanor Lisney (pictured, right), another high-profile disabled Greenwich resident, as a DPAC co-founder, said: “My care package is just enough to ensure I have my personal needs taken care of so that I am presentable for the work I do.

“I get my meals cooked and help to maintain hygiene at home, shopping and some leisure activities and campaigning work.

“I don’t think I can afford that if I have to pay for it myself.

“I think, ultimately, I fear that we will be stripped of dignity and choice if we are not afforded the basic daily functions that a non-disabled person takes for granted.

“It is disingenuous to say it is only imposed on people who can afford it, because many of us are walking the line with poverty and the safety net is not there for us.”

A new DPAC group in Greenwich, which Lisney, Hurst and Novis have set up, aims to challenge the proposed increased charges.

Their fight against Greenwich council’s proposals is supported by Inclusion London.

Svetlana Kotova, director of campaigns and justice for Inclusion London, said: “Social care charges are a tax on disability.

“More and more research is illustrating how care charges are pushing disabled people into deeper poverty and forcing some to make unenviable choices between heating and eating.

“Hammersmith and Fulham council have scrapped social care charges and Inclusion London hopes that Greenwich council will learn lessons from their colleagues and reduce the burden on disabled people who have already been hit disproportionately hard by a decade of austerity.

“We will continue supporting disabled people in Greenwich to campaign against the proposed changes and we will explore all possible means to prevent Greenwich council from implementing their proposals.

“We will make sure disabled people in Greenwich understand their rights, have access to advice, including legal advice, and can challenge councils’ decisions when necessary.”

Greenwich council refused to say if it was concerned that its proposals might push some disabled people into poverty, or if they might force some service-users to give up their voluntary or paid work.

It also refused to say if it believed that the changes would force some disabled people into residential care.

But Cllr Averil Lekau, cabinet member for adult social care and health, said in a statement: “Hundreds of people have had their say on a range of proposals that we are consulting on, and I have personally met and listened to residents who may be affected.

“The consultation has now closed, and all the responses will be collated, analysed and used to inform our decision.

“Since 2010, our funding has reduced by a staggering £1,400 per household, totalling some £125 million, largely as a result of funding that the government has taken away from us.

“At the same time, the population has grown, and more people have had to use our adult social care services.

“Many other councils have already increased the amount they are charging – something we have resisted for years.

“Unfortunately, we are at the end of the line and have to make some incredibly difficult decisions.

“However, whatever changes are brought in, we will make sure that there will be rigorous assessments so that the people who are least able to afford any increases are protected.

“I note that the new prime minister has pledged to fix the social care crisis – I very much hope that this means putting an end to austerity and giving councils the money they need to provide crucial services for their most vulnerable residents.”