You are here: Home / Benefits and Poverty / Court hears universal credit £20 uplift appeal, as activists vow to fight back 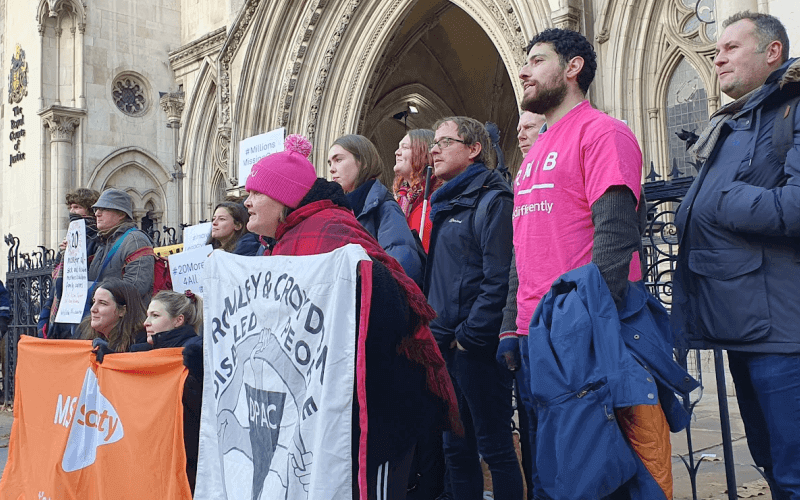 Disabled campaigners were outside the Royal Courts of Justice yesterday (Wednesday) to highlight the “appalling discrimination” experienced by an estimated two million claimants who were denied a £20-a-week rise in their benefits during the pandemic.

They spoke of the “heinous” failure of ministers to provide the same £20 uplift given to recipients of universal credit to those on “legacy benefits” such as employment and support allowance (ESA).

Yesterday, lawyers for four claimants of legacy benefits were at the Court of Appeal in London to attempt to overturn a ruling that found that the government’s decision was not unlawful.

The uplift was only ever received by those on universal credit, and never made available to those on legacy benefits.

Paula Peters, a member of the national steering group of Disabled People Against Cuts (DPAC), who took part in a vigil outside the court, said the “heinous” failure to provide the £20 uplift to those on legacy benefits showed the government “don’t give a damn about us”.

Martha Foulds, another DPAC steering group member, who travelled from Sheffield to take part in the vigil, said she had wanted to be outside the Royal Courts of Justice to help provide “a united front against this government”.

She said: “The government is united in attacking us, so we have to be united in fighting back.

And disabled activist Andy Mitchell, who travelled from Somerset for the vigil, said the £20 “would have helped to alleviate the financial strain” that disabled people experienced during the pandemic “and psychologically it would have made us feel included and that we matter”.

The high court ruled in February that work and pensions ministers behaved lawfully when refusing to offer the £20 increase to about two million claimants of ESA, jobseeker’s allowance (JSA) and income support.

While the high court accepted in February that there was discrimination towards disabled people on legacy benefits, the judge ruled the difference in treatment had been justified.

Lawyers for the four claimants argue that the difference in treatment was “unjustified and disproportionate” – and a breach of the European Convention on Human Rights – particularly as disabled people were already disproportionately affected by poverty, even before a pandemic that led to a significant rise in their cost of living.

A decision by the three Court of Appeal judges who heard the appeal this week is expected in the next few months.

Paula Peters told Disability News Service (DNS) yesterday why she and others had taken part in the vigil outside the hearing.

She said: “As a legacy benefit claimant, it is important to be here to highlight the appalling discrimination we face with being completely, deliberately overlooked and ignored with the £20 uplift.”

She said a victory in the case “would mean justice has prevailed and the wrong has been righted, and legacy benefit claimants would get the support they are entitled to – they would be able to keep their homes heated during the winter, keep food on the tables and pay social care support that is so desperately needed.”

She warned the government that it could “expect more resistance” because “DPAC are not going away”.

She said a victory in the case would show the government “that you mess with disabled people at your own risk.

“We will fight back, whether with legal action or direct action.”

Andy Mitchell said he was there as a campaigner and legacy benefit claimant who himself missed out on the £20 uplift.

He said the government’s failure was “an absolute injustice” and the way it had treated disabled people was “appalling”, while a victory in the case would be “a huge result to us”.

He said: “Some people are still in debt after lockdown and are struggling to pay their way out of it.

“For many of us on older benefits, we do not look at this case in isolation.

“Since 2010, we have lost out through austerity, benefit freezes, increased conditionality, and benefit sanctions.

“We’ve had our public services taken away and we’ve been demonised by politicians through the media. Not getting the £20 added insult to all those injuries.”

Anna Thompson, from the disabled women’s organisation WinVisible, called for the £20 to be reinstated for all those on universal credit – as well as being awarded to those on legacy benefits – which she said would make “a massive difference” and address the 200,000 children “left in poverty and destitution” by the removal of the £20 payment last year.

Marc Francis, director of policy and campaigns at the poverty charity Z2K, which played a key role in bringing the case, told those at the vigil that February’s judgement had been “absolutely wrong” and that disability discrimination was “never justified”, and he expressed support for the four claimants who were fighting the case.

He said the government should “change its approach” that had led to a two-tier benefits system, which meant some claimants were “left behind” and received less money.

Politicians who attended the vigil to support the appeal included Labour’s Debbie Abrahams, a member of the Commons work and pensions committee, who said it was “so discriminatory” of DWP not to provide the £20-a-week payment to legacy claimants.

She said: “There’s a lot of evidence to show, particularly over the last 10 or 12 years, that disabled people have absolutely been hammered by this government.”

Marion Fellows, the SNP’s spokesperson on disability, praised those who had spent years fighting the government’s reforms, and she said that February’s ruling had been “absolutely ridiculous” and that “justice must prevail”.

DWP refused to comment on an ongoing court case, and would not even provide an on-the-record comment confirming that it believed it would not be appropriate to comment on the case.

Meanwhile, DWP has also refused to say what caused many recipients of personal independence payment (PIP) to fail to receive their monthly payments this week.

The failure of the DWP payment system appears to have affected thousands of disabled people on Friday (2 December) and Monday (5 December).

The problem led to DWP declaring a “major incident” on Monday, according to Buckinghamshire Disability Service.

A DWP spokesperson said on Tuesday: “The issue was rapidly identified and resolved yesterday and we’ve now made the payments.

“It impacted a small proportion of PIP claimants who were due to be paid yesterday.”

But he refused to say what caused the problem or to confirm that claimants with payments that should have been made on Friday had also been affected.