You are here: Home / Arts, Culture and Sport / Deaf actors ‘feel like outsiders’ because of industry’s BSL barriers 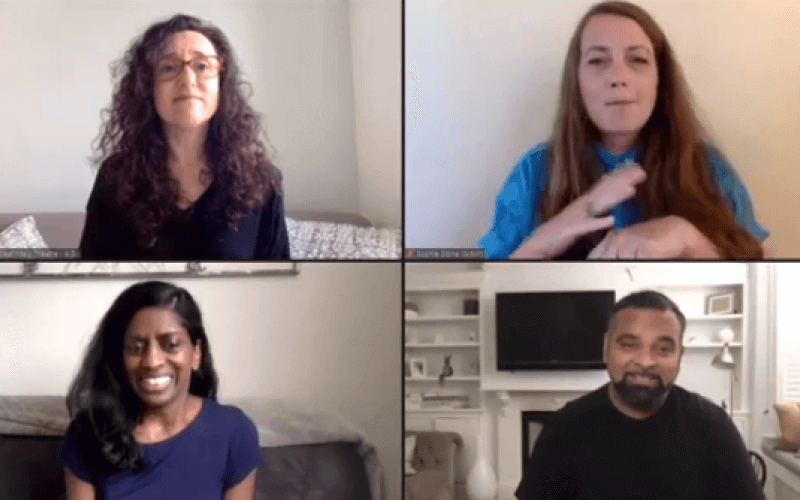 Deaf actors who use British Sign Language (BSL) have described how they feel like “outsiders” because of the barriers they face within the industry.

A trio of Deaf actors spoke out at the online launch of new guidance for the industry yesterday (Wednesday) by the performers’ and creative practitioners’ union Equity.

The Guide to Good Practice with BSL in the Arts includes sections on casting deaf actors, casting hearing actors with BSL experience, and working with deaf actors.

Actor Sophie Stone (pictured, top right) said she often turned up to auditions where producers were seeking a D/deaf actor, only to find there were no interpreters.

She said: “It completely knocked my confidence.

“It felt like a very inequitable process where a hearing actor could come in, pretend to be deaf, sign a little bit, and it felt like the barriers were already in place because there had been no consideration for a deaf performer turning up and feeling like they had an equal presence in the room.”

Stone said she “always felt like an outsider” as a Deaf actor, and that this “frustration was immense”.

She said: “I still feel that now. Sometimes it’s a tick-box exercise. It’s about bringing a deaf actor in but there’s no thought as to how to support that actor once they’re in place.

“It feels like we are constantly fighting for everything we need, which in turn makes us look difficult, because we are not being represented properly.”

Another Deaf actor, Nadia Nadarajah (pictured, bottom left), said she was often forced to source BSL interpreters herself for auditions, with just a few hours’ notice, which made it harder to prepare for the audition as an actor.

She said: “There are 150,000 Deaf sign language users across the UK. We are visible in terms of using that language, so if you’re walking around going to work, shopping, you’ll see Deaf people out there on the street; we are not hidden away.”

She said BSL must be used “authentically” on television, in film and on stage.

She added: “It’s a country that needs to have its BSL represented accurately and authentically.”

Julian Peedle-Calloo (pictured, bottom right), a Deaf actor, writer and presenter, said there needed to be far greater representation of deaf people in television programmes to reflect the reality of British life.

But he said that using a BSL-using actor and an interpreter can be easily achieved and is “not a huge hurdle to overcome”.

He said this was why he was so pleased to see the guide, which would be a “valuable resource” for the industry.

Alim Jayda, an actor and BSL interpreter and author of the new guide, said he wanted to make it a “go-to document”.

Jayda, who worked on the guide with the deaf-led theatre company Deafinitely Theatre, spoke about the wider discrimination faced by BSL-users.

He said deaf children were still being punished for signing at British deaf schools, while medical professionals were telling parents of children newly-diagnosed as deaf that they should not encourage their children to use BSL because it will “hinder their development”.

But he said: “What research actually says is that sign language alongside speech assists development and does not hinder it.”

Jayda, whose parents are both Deaf and who is himself hard-of-hearing, said there had been “years and years and years of oppression, which still continues to this day” against users of BSL.

He said: “If we see sign language represented in television, in film and on stage and it is represented in the highest quality, then that has an influence, it has a ripple effect, it means that politically the culture will change.”

Paula Garfield (pictured, top left), creative director of Deafinitely Theatre, said the oral education system had “failed thousands, if not millions, of deaf children and I was one of them as well.

“I was taught the speaking and listening approach and if I tried to sign I was punished and I was called a monkey, and that was incredibly damaging and I grew up with that and my self-esteem was very low.

“I left school at 17 with an equivalent reading age of a hearing child of eight and that severely impacted my life, but I do have to say that working in theatre has saved my life because it’s the only place I feel free to express myself freely via sign language.

“I do hope that these guidelines do effect change because a lot of deaf people have been suffering for so long and it is now time to make this change.”