A national disabled people’s organisation appears to have staved off threatened closure, after reaching a tentative agreement with a statutory body to take on responsibility for its massive pensions deficit.

Disability Rights UK (DR UK) says it has an unsustainable pensions deficit of more than £3 million, but has now agreed to pay compensation to the Pension Protection Fund (PPF) – which is answerable to the Department for Work and Pensions – to take over its defined benefits pension scheme.

DR UK – which was formed in 2011 from a merger between RADAR, Disability Alliance and the National Centre for Independent Living – is using a company voluntary agreement (CVA) to ask PPF to take over its pension scheme.

If PPF agrees, it will mean that those holding pensions in the fund will face some restrictions, including those who have not yet reached pensionable age receiving only up to 90 per cent of their full pension when they retire.

He said: “Doing nothing is not an option and is likely to lead to a formal liquidation process and a closure of the charity unless the pension deficit is addressed. Our board unanimously believes this is the right way forward.”

Last year, Disability News Service reported that DR UK’s auditors feared there was “some uncertainty” about its ability to continue as a “going concern” because of its pensions liability, caused mainly by RADAR’s final salary scheme.

Because of low interest rates and changes in the government bond markets, the deficit has risen five-fold in just three years – from £600,000 in 2010 to more than £3 million last year – even though the fund has been closed to new members for more than 10 years.

This meant the charity was unable to agree an affordable plan to clear the deficit, and so took legal advice and followed Charity Commission guidance.

Liz Sayce, chief executive of DR UK, said: “We could have made a repayment on this financial year, but it would have been very different from the next financial year onwards. I think it could have put the future of DR UK at risk.”

She said an agreement with PPF – which was set up in 2005 to help those whose pension schemes were no longer able to afford to pay their promised pensions – should guarantee DR UK’s future.

There will now be an assessment period by PPF, which should lead to the DR UK pension scheme being transferred to the fund in return for a compensation payment from DR UK. PPF has agreed this action in principle.

In its first two years of full operation, DR UK has broken even despite paying significant sums in pension repayments and associated costs, and it insists that it is “sustainable” and that its business model is “entirely viable”.

Now the PPF plan will have to be voted through by both DR UK’s members and its creditors.

If approved, the granting of a CVA will have no effect on DR UK’s staff, and its work “will continue as planned”, the charity said.

Sir Bert Massie, a former RADAR chief executive and a member of the DR UK pension scheme, said the charity had been faced with “a real dilemma”.

He said: “If I was running DR UK today I would probably make the same decision, even though it damages me.

“If you accept that what DR UK are doing is worthwhile, the trustees have a duty to protect what they are doing.

“I can’t say I am bouncing with joy, but where are the [other] options?”

He has already turned 65, so will not be hit by the reduction to 90 per cent, but will still experience a reduced payment because his pension will now be increased every year by slightly less than the rate of inflation.

Sayce said she was unable to say how much compensation DR UK would have to pay to PPF.

But she said: “If this goes through, we will be in a stronger position. We will not have a pensions deficit showing on our balance sheet.

“There is a downside which is that… if [members of the scheme] are not yet at retirement age they could be subject to a small reduction.

“That is deeply regrettable and our trustees debated long and hard about this. They didn’t want to do anything to harm the pensioners. On the other hand, it was the only viable way forward.

“It removes a fluctuating and uncertain liability, it means we can plan for the future and we have a good way forward.

“Our trustees unanimously believe it is the right thing to do, as do I.” 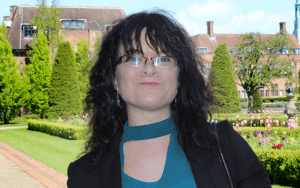