You are here: Home / Arts, Culture and Sport / Disabled artist ‘sections’ DWP for being ‘a danger to benefit claimants’ 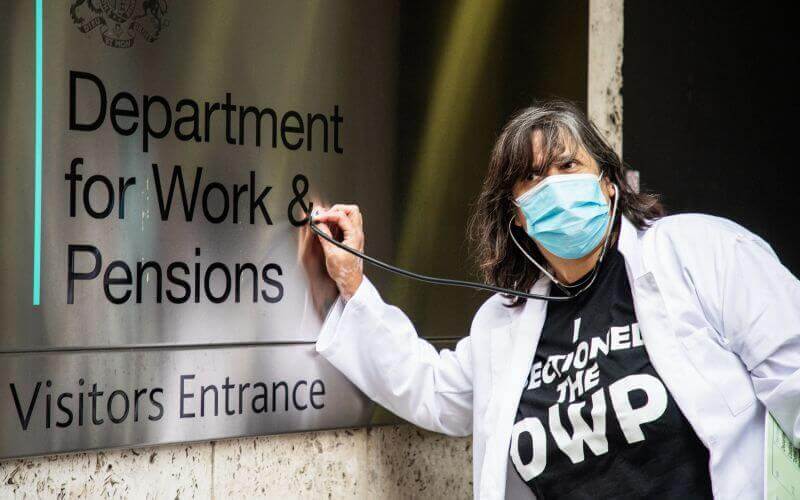 A disabled artist-activist yesterday attempted to “section” the Department for Work and Pensions (DWP) for being a danger to benefit claimants.

In an action designed to highlight DWP’s lack of compassion, Dolly Sen delivered a printed heart to DWP’s Caxton House headquarters in Westminster and laid it at the front entrance.

Laying a stethoscope against DWP’s nameplate outside its offices (pictured), she said: “I can’t hear a thing. There’s no heart in this building.”

She later stretched yellow and black tape across the front and rear entrances of the building to demonstrate that it was being sectioned under the Mental Health Act.

Sen accused DWP of lacking kindness, compassion and decency in the way that it treats disabled people who claim benefits such as personal independence payment and employment and support allowance.

She said the department had driven many claimants to their deaths.

As the action ended, a police officer – apparently called by DWP – arrived but was happy to allow Sen and her team to leave after she explained why they were there and told her about the deaths of benefit claimants including Jodey Whiting and Errol Graham, both of which were closely linked to DWP failings.

Sen told Disability News Service later: “I am glad they called the police.

“It means that something we did riled them, unsettled them. It obvious struck a nerve. There was a reaction.”

Asked why the action was important, she said: “People are still dying.

“I am still seeing people who are suicidal being asked to do impossible things like 200 job applications when they struggle to do basic day-to-day living.”

Her message to DWP, she said, was: “Where is your heart? Today I was looking for your heart and I couldn’t find it.”

The action is one of several being devised by Sen that will be included in a film about DWP, which also explores how art can be used in activism and “can touch people in a way that ordinary information cannot”.

But the protest was also making a series of demands, including an end to “unfair, punitive, devastating” benefit assessments that are not fit for purpose, and recognition that DWP is institutionally disablist, and that it is damaging people’s mental health, including during the COVID-19 crisis.

Sen, an award-winning writer, artist, performer, filmmaker and “professional mad person”, also wants DWP to make “radical changes to its policies and administration of social security benefits to make the safety of all claimants a priority”.

She was joined in the action by Joy Dove, the mother of Jodey Whiting, who took her own life in February 2017, 15 days after she had her out-of-work disability benefits wrongly stopped for missing a work capability assessment.

Dove displayed a banner calling for “Justice for Jodey” and she asked again for the attorney general to decide whether to call for a second inquest into her daughter’s death.

She said outside Caxton House that she was at the action for her daughter.

She added: “I want the right decision from the attorney general for a second inquest, and a public inquiry. I’ve waited long enough.”

Another protester told DWP: “You have blood on your hands.”

Dove has told the attorney general that the original inquest in May 2017, which lasted less than an hour, failed to investigate DWP’s potential role in her daughter’s death, and that new evidence has since emerged.

This new evidence includes the ICE conclusions, and a report from a consultant psychiatrist who found that DWP’s failings would probably have had a substantial effect on Whiting’s mental state at the time she took her own life.

Her family had no legal representative at the inquest and were unaware that they could have been entitled to public funding to ensure they had one.

Dove believes a second inquest would increase the pressure for an independent inquiry into all deaths linked to DWP’s failings.

The call for a new inquest has been backed by grassroots groups of disabled people which last year supported a petition in her daughter’s name that demanded an independent inquiry into her death and the many others linked to DWP failings, and was signed by more than 55,000 people.

Dove told DNS after yesterday’s action that she was glad she had made the 250-mile journey from her home in Stockton-on-Tees to take part.

She said: “I will never forgive them for failing my daughter and driving her to her death, like many others.”

She said DWP needed to change its assessment system so it was more considerate to disabled people and those in vulnerable situations.

She said: “Whatever the decision [of the attorney general], I will keep fighting for justice for Jodey and others.”

DWP declined to answer questions from DNS, including why it called the police and what the department had done with the printed heart.

But a spokesperson said in response to the action outside Caxton House: “The DWP works extensively with assessment providers and disability representative groups to ensure that people receive high quality assessments and get the support to which they are entitled.”