A disabled politician is hoping to become the first transgender person to be elected to parliament, when she contests next May’s general election.

Emily Brothers is standing for Labour against the Liberal Democrat former minister Paul Burstow in the Sutton and Cheam constituency in south-west London.

She was selected as the party’s prospective parliamentary candidate for the seat in November 2013, but spoke to the media about her transgender status for the first time this week.

Brothers said she was “proud” of how her party, friends and family, and would-be constituents in Sutton and Cheam, had reacted to discovering her transgender status.

She said: “The people of Sutton and Cheam have just let me go through my transition, live as Emily, without a blink of an eye, and they have been tremendous.

She told Disability News Service (DNS) that she had not been forced to speak about her transgender background by any threat of being “outed”, although there had been “a few references, comments and questions which weren’t direct but I felt increasingly awkward, and I knew some people knew me from my past”.

She said: “It was just a sense that sooner or later somebody somewhere might talk and that might be negative.

“There has been a lot of coverage about the loss of trust in politics and because of that I was concerned that people would potentially spin my privacy about my gender background as another politician not being honest.”

Brothers also told DNS that she had experienced far more discrimination as a blind person than she had as a transgender woman.

She said: “Fortunately, as a woman with a transgender history, I have not experienced significant discrimination or prejudice. However, I have come across a lot of it as a disabled person.”

The “substantial” barriers she faces as a blind person – particularly with access to information and mobility – have been added to by more recent hearing loss, and she now wears hearing aids.

Brothers began living full-time as a woman in March 2007, and received a gender recognition certificate in October 2009.

She said she delayed speaking to the media about her gender background because she was now treated “as Emily, as a woman”, and it was not obvious that she had “a gender history”.

She said: “It was a nervousness about whether people would stop interacting with me as a woman; that was one of the concerns.”

The process of going through gender reassignment is “hugely challenging and emotionally traumatic”, she said, and it “takes time to build confidence in your life and people around you”. She was also concerned about her two children, who are now 18 and 20.

Brothers said that although she did not see herself as a representative of either disabled people or the trans community – and did not want to be seen as a “one-trick pony” – she felt she had a role in “adding value” because of her “personal experience”.

She said: “I see myself as somebody with particular insight and expertise around equality broadly, and as disability and transgender are particular issues close to me I would give them attention.”

But she said she would have to represent all of her constituents if she was elected, and not just those who were disabled or from the trans community.

Speaking to DNS the day after she first discussed her trans status in the media, she said the reaction had been “amazingly positive” and “quite overwhelming”, with a “huge amount of positive feedback on social media”.

But she knew that once she had given the first interview – with Pink News – there was “no going back”.

Labour leader Ed Miliband tweeted his support, telling followers: “So proud to have Emily Brothers as a @UKLabour candidate. She is an important voice in our movement,” and: “Emily Brothers has long been a courageous campaigner on disability rights & now on trans issues too.”

Brothers insists that she had had no concerns about how Miliband would react when he found out about her transgender background.

“I didn’t need an assurance that Ed would be OK. Knowing Ed, and what he stands for, I knew he would be absolutely fine.”

Before her first interview, she said she felt it would “certainly not be a career-making move but it could be a career-breaking move.

“Now I think the positive feedback means I am probably going to hold my own.”

But she said she still feared a “backlash”, possibly in the right-wing media. “I am aware there will be a backlash at some point from some elements of the media. I would hope not but we have seen it in the past.”

Brothers also told DNS that she had come very close to killing herself during the gender transition process, in late 2006 and early 2007.

She said: “I was close to taking my own life because the challenge seemed so great, and I was hurting people close to me and around me.

“Where I am now is a completely different place. What I am trying to say is that it is possible… anything is possible.”

She said that one of her fears was that people would not take her seriously and would treat her as a “figure of ridicule”, when all she wanted to do was “live my life as a woman”.

But she said: “I thought it would be harder but it hasn’t proven to be the case. I have got a new wardrobe but I have just been me, just me with a different wardrobe.”

Brothers is a former programme head of the Equality and Human Rights Commission, where she specialised in health and local government, and previously worked at the Disability Rights Commission and RNIB.

She is also a former president of The National Federation of the Blind, and has been campaigning on disability rights issues and been involved in disability politics for more than 30 years.

Although Labour came a distant third to Burstow and his Conservative opponent at the 2010 election, Brothers insists that victory is possible in May.

She said: “It is a very open election. I think it is so unpredictable and we are going to see some surprises across the board.” 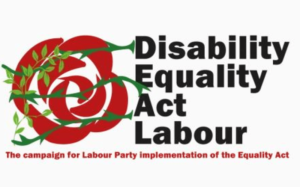