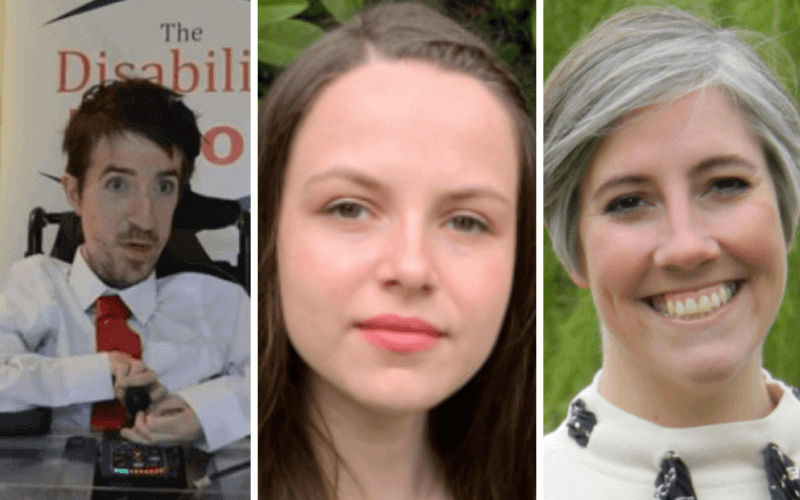 A disabled councillor has described how the lack of support from the disability benefits system and the removal of the right to contribute to meetings remotely have stalled her political career.

Blossom Gottlieb was elected as a Green councillor to East Hampshire District Council in a by-election last October.

But she told an online event discussing how to increase the representation of disabled people in politics that the barriers she faced meant she was unlikely to be able to stand for re-election next year.

Gottlieb said she had stood for election, despite the barriers she faced as a wheelchair-user, because she had been prevented from attending university by her health condition.

But she told the meeting, hosted and organised by The Disability Union, that her position as a councillor had been made much more difficult because the ability to contribute remotely during the pandemic had now been removed, which meant she had not been able to attend meetings or use her vote.

She said: “It’s really, really disheartening because you go into something wanting to make a difference and then you’re not able to, even though it’s the same government that has defined what discrimination is and what reasonable adjustments are.

“It’s been so wonderful to be on this call because I feel I’m not alone and for the last year I’ve felt really isolated and have just not been offered any help.”

She said she had twice had applications for personal independence payment rejected, which meant she probably would not be able to stand for re-election next year.

“We need to be aware of the strain that this application system has on disabled people and their families and carers in terms of mental health and lifestyle.”

She added: “Disabled people are a quarter of the country and that’s not represented in politics and it never will be unless we introduce a better and more accessible and actually truly democratic voting system like proportional representation.”

Kirsty Smillie, strategic development officer for The Disability Union, said the union wanted to empower disabled people and carers to be “active in democracy from a community level all the way up to parliament”.

She told the event: “Your voices need to be heard. You need to be sat around that table when people are making the policies and decisions that directly affect you.”

The union has launched a year-long programme that it hopes will equip disabled people and carers “with the tools to have their voices heard” and become leaders.

Kirsty Blackman MP, the SNP’s shadow work and pensions secretary, spoke at the online event of the mental distress she experienced during the pandemic, which meant she had had to step back from her role as deputy leader of the SNP group in Westminster.

She also said she was in favour of allowing job-sharing MPs, although this is not SNP party policy.

She said: “It’s my personal position that if you can’t be an MP and a carer, or an MP and a disabled person, or an MP and a single parent, then we are failing to be representative so I wholeheartedly agree that that is a good way forward and would make a difference.

“It is the case that if parliament, or the Scottish parliament, or councils, do not have representative members then we will not make good decisions across the board.

“We don’t have the ability to hear and learn from people’s real life lived experiences in the way that we should, and that should not just be in social security or workers’ rights or particular issues that are considered to be disability-related issues.

Another MP to back the idea of allowing MPs to job share was John McDonnell, Labour’s former shadow chancellor.

McDonnell is a long-time supporter of introducing job-sharing for MPs and 10 years ago introduced a private members’ bill on the issue, which he said this week was an idea that “came from the disability movement” and disabled people who said they could work a certain number of days a week as an MP but not full-time.

He said such a change to the law would be a “small step forward”.

He also backed the idea of including disabled candidates on Labour’s shortlists for selecting parliamentary candidates.

He said: “I do think we need to have positive discrimination.”

McDonnell said Labour had increased the number of its female MPs through all-women shortlists.

He said: “It did work, and I actually do think the ability to have disability on the shortlist is a step we need to take because we can’t go on the way we are.”

He later pointed to last week’s Disability News Service story, which found that MPs have asked the prime minister fewer than 20 questions on subjects focused on disabled people and their rights in the last 18 months of prime minister’s questions.

He said he agreed that this was partly a result of a lack of disabled MPs.

But he also pointed out that the priority for many disabled people over the last year was “just fighting to survive” in the cost-of-living crisis.

He said: “Unless we overcome this issue of the link between disability and poverty, a lot of it is just sticking plaster stuff.”

Daisy Cooper, the Liberal Democrat MP and deputy party leader, who has a long-term health condition, called on the UK government to follow the Scottish government in creating an Access to Politics scheme, as well as a new Access to Elected Office scheme.

Before her election as an MP in 2019, Cooper worked for the cross-party campaign group More United, which launched a legal action against the UK government after it closed down the Access to Elected Office Fund.

The fund had offered grants to disabled people to pay for some of their additional impairment-related costs in standing for election, and the legal challenge forced the government to re-open the fund temporarily under a new name.

Cooper said: “I am 100 per cent of the view that even though political parties need to change the way they operate and the way that they engage with their own disabled members, fundamentally the only way that disabled people can compete on an equal basis, on a level playing-field, in elections is the support of a national fund to support them to do that.”

Her party has made it mandatory for every local party to decide if it wants to set up a disabled-only shortlist or reserve places on their shortlist for disabled candidates for general elections.

Although only one has agreed to an all-disabled shortlist so far, others have reserved places on the shortlist for disabled candidates.

Kathy Bole, chair of Disability Labour, told the meeting: “We are not asking for anything other than what people who are not disabled are asking for.

She said she attended a meeting of the all-party parliamentary group on disability earlier in the week and had been shocked to see only three people out of 60 who identified as being a disabled person from a BAME community.

She said: “I find that not only does society discriminate against disabled people, it is difficult for me not to say that the disability movement sometimes does too.

“The disability movement itself has a lot of work to do around engaging with other communities.

“I want us to work together to make this a reality for all of us.

She said she had been the only black disabled person supported by the Access to Elected Office Fund.

She added: “I wasn’t successful in being a councillor and that saddens me.

“It was because there was not enough encouragement, support from the equalities department in government that should have been supporting individual disabled people to go forwards and stand, there just was not enough support there.

“We were kind of put there to fail.”

George Baker, founder of The Disability Union, told the online meeting: “For disabled people to get really involved in politics and for there to be a truly representative system, we have to fix all the other basic problems disabled people face.”

He pointed to poverty, access to work, social care, and being able to access the local community.

As a wheelchair-user, one of the problems he faced when campaigning to stand in the last general election in Winchester was door-knocking.

Baker, who has recently been elected as a parish councillor in Winchester, said: “There are multiple different ways to make door-knocking or canvassing accessible to me.

“It shouldn’t be my job to do that, it should be part of the structure of how these things are run.”

He said that accessibility should be a human right, and a basic service.

He added: “A lot of what we are going to fight for as The Disability Union is the basic services to get people out of poverty so they can get involved in these things.”