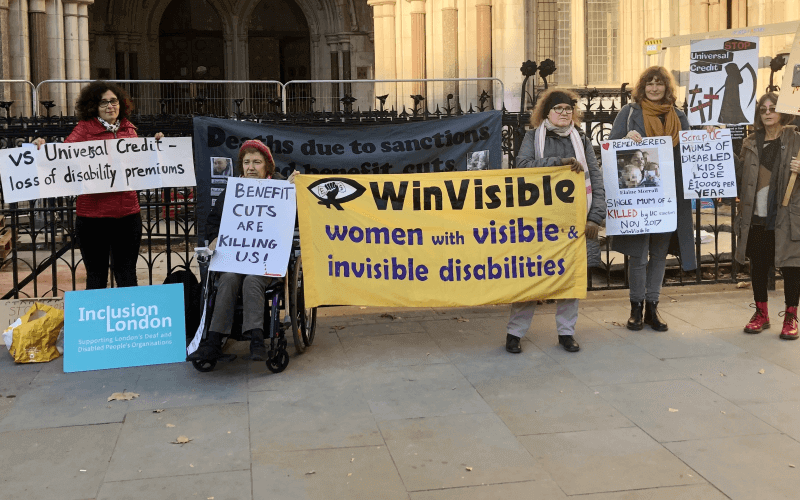 Two disabled men have been forced to return yet again to the Royal Courts of Justice this week to fight what they say is the injustice caused by the government’s universal credit benefit system.

The men, known as TP and AR for legal reasons, have been fighting for two years against government policies that left them substantially worse off when they were forced onto universal credit (UC) after moving local authority area.

Disabled campaigners from Inclusion London and WinVisible mounted a vigil (pictured) outside the courts in central London on Tuesday as the hearing began on the international day of disabled people.

Inclusion London said the vigil showed “solidarity and support” for the two men, expressed “dismay” at the policies and actions of the Department for Work and Pensions (DWP), and showed how harmful UC has been for disabled people.

The Equality and Human Rights Commission (EHRC) is intervening in the case, to support TP and AR and argue that they have faced “unlawful discrimination”.

Leigh Day, the legal firm representing the two men, says that more than 13,000 disabled people with high support needs are known to have lost out financially because of the UC arrangements.

TP and AR originally won a high court case after being forced to move onto UC when they had to move to new areas where the new benefit system had already been rolled out.

TP had been forced to move so he could access specialist healthcare, following a diagnosis of end stage non-Hodgkin Lymphoma cancer.

AR had also had to move to a universal credit “full service” area, in his case because the bedroom tax meant his previous home was unaffordable.

Moving onto UC meant they each lost out by about £180 a month because they were no longer able to receive the severe disability premium (SDP) and enhanced disability premium (EDP), despite being assured by civil servants that they would not be worse off under UC.

After winning this case, the two men received damages and compensation for the lost payments, and were awarded ongoing top-up payments of about £180 a month until new regulations could be brought in by ministers.

As a result of the case, the government stopped other disabled people in similar situations migrating onto UC.

But DWP proposed offering top-up payments of just £80 a month to those who had already moved, rather than compensating them for the full £180 a month they had lost.

This meant TP and AR had to launch a second legal challenge, arguing that they were being treated unjustifiably differently to those who had not moved onto UC.

They also won this second case, but their lawyers had to return to the court of appeal this week after DWP appealed against the decision.

A third case – which they were forced to take when ministers announced through regulations this summer that the level of compensation for former EDP and SDP recipients who moved onto UC before 16 January would be set at £120 for single claimants, higher than the £80 but still much lower than the £180 TP and AR secured temporarily through their first court action – is on hold pending this week’s appeals.

An EHRC spokesperson said: “Everyone is entitled to an adequate standard of living.

“We have intervened in this case as we believe that the removal of disability related payments without ‘top up’ payments left the claimants at a disadvantage and was unlawful discrimination.”

Carolin Ott, from Leigh Day, said: “It beggars belief that despite two findings of unlawfulness by two different judges, and new regulations that acknowledge the need for protection for severely disabled individuals losing their severe disability premium, the government is still determined, and spending taxpayers’ money, to continue to fight these cases.

“We hope that the court of appeal will uphold the ruling made by the high court in our clients’ favour to ensure the many affected individuals with severe disabilities receive much needed support.”

A DWP spokesperson declined to comment on the case.