You are here: Home / Activism and Campaigning / Disabled man forced to turn fridge off for 90 minutes at a time as UC cut looms 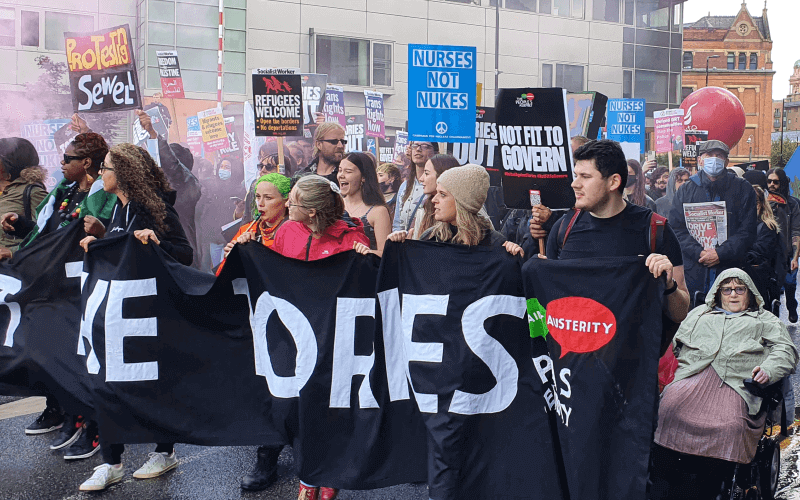 A disabled man has described how he is turning his fridge off for 90 minutes at a time to try to save on his electricity bill, as he prepares for his universal credit to be cut by £20 a week this month.

John Owen, from Eccles, was one of thousands of activists who took part in Sunday’s Protest the Tory Party Conference demonstration in Manchester.

The march (pictured), organised by The People’s Assembly Against Austerity, passed within a few yards of the Conservative party’s annual conference in central Manchester.

Each of the disabled campaigners Disability News Service (DNS) spoke to on the protest said they were there, at least partly, because of the government’s decision to end the £20-a-week increase to universal credit, introduced at the start of the pandemic.

Owen told DNS that he was already taking drastic action to keep his electricity bill down as he prepares to lose his £20-a-week.

He said: “I turn the fridge off for an hour-and-a-half just to keep the electric down. That’s how I have got to live.”

For the last couple of weeks, he has also been restricting himself to watching television for just 90 minutes every evening, and keeping lights switched off.

He said: “I am just sitting in my room for the rest of the day, staring at the four walls.

Debbie Jackson, from Accrington, was another protesting at the £20-a-week cut, although she did not receive the uplift herself as she receives one of the so-called legacy benefits.

She is clinically extremely vulnerable to COVID-19 but decided to take part in the protest even though she knew she was putting her life at risk by mingling with so many other people.

She told DNS: “I am willing to put myself at risk because someone needs to let them know they are not welcome any more.

“I will be in bed for a week after this, but it’s worth it.”

Mike Kelly, from Salford, said he believed the Conservative government was “trying to rip the country apart” and was showing “no compassion, no empathy” by removing £20-a-week from people who are “barely scraping by now”.

His utility company has already told him that his monthly direct debit will need to rise by £21 a month because of rising fuel prices.

Kelly said he believed that many people will soon have to choose between eating and heating.

Another disabled protester, JoAnn Taylor, from Salford, said she was taking part in the march because of “the horrendous impact of the cuts”.

She is another who did not receive the £20 uplift because she was claiming a legacy benefit, in her case employment and support allowance (ESA).

She is hoping that next month’s high court case – in which two disabled campaigners are challenging the failure of the Department for Work and Pensions to offer recipients of legacy benefits the same £20 increase given to those on universal credit over the last 18 months – will “bring justice to people like myself”.

Jennifer Jones, from Disabled People Against Cuts Sheffield, told protesters at the start of the march: “We all know about the awful, dreadful, hideous cut that is about to be put upon all universal credit claimants, so we need every single one of you, whether you’re a claimant or not, to show your solidarity with people who are about to lose £80 a month.

“The majority of people who are on universal credit are people who are in work, low-paid work, the other people are looking for work or are unable to.

“However, we need to also remember ESA, JSA [jobseeker’s allowance] and income support claimants, because people who have not been put onto universal credit yet, people who are on the old-style benefits, never received that extra £20-a-week.

“They went through the whole of the pandemic with no additional support whatsoever. For shame!

“And that is just one example, isn’t it, of the many, many ways that this government has let people down.”

Asked about the imminent cut to universal credit, work and pensions secretary Therese Coffey told a fringe event at the party conference later that day that the universal credit uplift was “always designed to be temporary”.

She mentioned the £500 million Household Support Fund announced last week – which has been criticised for providing less than 10 per cent of the funding that will be lost through the end of the uplift – and said she was “particularly conscious of some of the spikes that it feels are about to happen, particularly on energy bills”.

Coffey said she was “conscious that that’s something that we will try and make sure reaches the people who are really struggling” and that “we know these are really challenging times”.

But she said that the government’s “direction of travel” was “about continuing to invest in people to get back into work and to get on in work… to try to help people become more prosperous”.