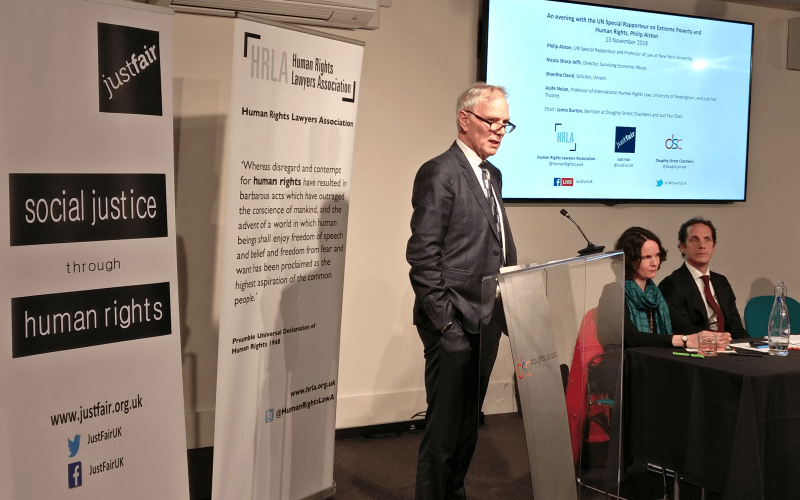 Many disabled people’s families have been “driven to breaking point” by cuts to social care, while other disabled people have been denied benefits and forced by the government into unsuitable work, a UN human rights expert has concluded.

Professor Philip Alston, the UN’s special rapporteur on extreme poverty and human rights, said in his final report on the UK that disabled people were “some of the hardest hit by austerity measures”.

Alston said that cuts to public spending, and “highly regressive” changes to taxes and benefits since 2010 – combined with the government’s “stubborn” refusal to carry out an assessment of the impact of its austerity cuts and reforms on disabled people and other groups – suggested that the UK government’s policies breached the “principle of non-discrimination enshrined in international law”.

The report quotes Equality and Human Rights Commission research that found that some disabled people are set to lose £11,000 on average by 2021–2022, more than 30 per cent of their annual net income.

And it says the UK government’s reforms have often denied benefits to disabled people with high support needs and “pushed them into unsuitable work”, while care for people with mental distress has “deteriorated dramatically”.

The report describes how disabled people told Alston repeatedly when he visited the UK last November about “benefits assessments that were superficial, dismissive, and contradicted the advice of their doctor”.

It adds: “Those with disabilities are also highly vulnerable to cuts in local government services, particularly within social care, which has left them shouldering more of the costs of their care.

“This has driven many families with a person with a disability to breaking point.”

Alston said he had reviewed “seemingly endless evidence” that showed the “harsh and arbitrary nature” of some benefit sanctions, and the “devastating effects of losing access to benefits for weeks or months at a time”.

His report adds: “Many detailed studies give substance to the dire consequences for vulnerable claimants who are sanctioned.”

Disabled people are among the groups disadvantaged by the introduction of universal credit, he said, which has “built a digital barrier that obstructs access to benefits”.

He said he had heard “countless stories of severe hardships suffered under UC”, reports that were “corroborated by an increasing body of research that suggests UC is being implemented in ways that negatively impact claimants’ mental health, finances and work prospects”.

The report points out that work and pensions secretary Amber Rudd admitted in February that food bank use has increased in areas where UC has fully rolled out.

Alston said the government had remained in a “state of denial” about the impact of its policies, while it might appear that the Department of Work and Pensions (DWP) “has been tasked with designing a digital and sanitized version of the nineteenth century workhouse, made infamous by Charles Dickens”.

He accused the government of pursuing an agenda “to reduce benefits by every means available, including constant reductions in benefit levels, ever-more-demanding conditions, harsher penalties, depersonalization, stigmatization, and virtually eliminating the option of using the legal system to vindicate rights”.

But he also said he had witnessed “tremendous resilience, strength and generosity, and heard stories of deeply compassionate work coaches, local officials and volunteers; neighbours supporting one another; councils seeking creative solutions; and charities stepping in to fill holes in government services”.

Alston’s findings were contained in the final report on his visit to the UK last November (pictured), which was published yesterday (Wednesday) and will be presented to the UN Human Rights Council on 27 June, when the UK government will formally respond.

But DWP dismissed his conclusions, as it had done when he released his initial findings last year.

A DWP spokesperson insisted that UN data showed the UK was “one of the happiest places in the world to live” and the report was “a barely believable documentation of Britain, based on a tiny period of time spent here” that “paints a completely inaccurate picture of our approach to tackling poverty”.

The DWP spokesperson said: “We take tackling poverty extremely seriously which is why we spend £95 billion a year on welfare and maintain a state pension system that supports people into retirement.

“All the evidence shows that full-time work is the best way to boost your income and quality of life, which is why our welfare reforms are focused on supporting people into employment and we introduced the national living wage, so people earn more in work.”

But Alston accused ministers of seeking to “distract from the troubling findings of this report by misrepresenting the process behind it”.

He said his report was based on months of preparation, more than 100 consultations, an analysis of over 300 submissions, and more than 100 citations of the government’s own data and that of “renowned UK institutions”.

He added in a statement: “I traveled the country meeting with people in poverty, prominent researchers, and frontline staff at foodbanks and advice centers, many of whom said they wished the government would do the same.

“The government had an opportunity to review the report ahead of publication, yet made only eight minor changes.

“The UK is happy to use human rights to criticize other countries, but it must also reckon with its own human rights problems.”