You are here: Home / Arts, Culture and Sport / Disabled spectators ‘told to move so they would not be in Commonwealth Games photos’ 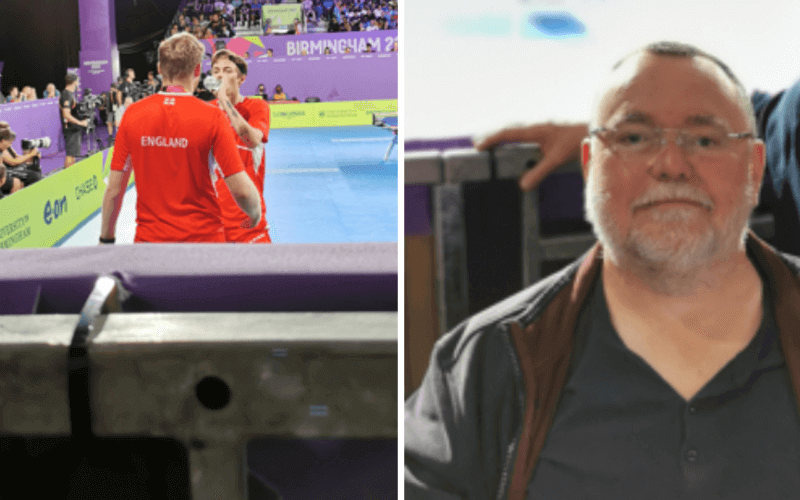 Commonwealth Games organisers have been accused of “shocking” discrimination after disabled spectators were told to move from an accessible viewing area so they would not be seen in photographs of a table-tennis medal ceremony.

The area reserved for disabled spectators was directly behind the medal rostrum at the NEC in Birmingham, and staff cleared it in advance of the award of medals after the men’s singles final on Monday morning.

Dr Paul Darke, co-founder of the disability arts organisation Outside Centre, was one of the disabled spectators watching the final and had attempted to move into the empty space behind the rostrum, but he was told by a staff member to move “so you’re not in the photos”.

He then realised that all the other disabled spectators had been cleared from the area.

He was told: “We want you to move so you’re not in the photos when they take the pictures of the medal-winners.”

Darke then realised that non-disabled people sitting just behind and above the accessible area had been allowed to remain in their seats.

He said: “At any sports event there is normally crowd behind every single scene.

“There were non-disabled people above us who they didn’t move, so it was inexcusable.”

He added: “The most annoying thing was I let them do it. I was shocked and incredulous at what had happened but afterwards I blamed myself for letting them do it.

“Non-disabled people wouldn’t have put up with it, but we’re used to it and often don’t complain in the moment.

“It was just incredibly disappointing.”

He said he later began to feel “incredulous” at what had happened, particularly as he had enjoyed his experiences as a wheelchair-user watching the cricket and cycling time trial.

Darke is now writing to the Commonwealth Games to lodge a complaint about how disabled people were treated, and he will point out that what happened contrasted with Birmingham 2022’s message of inclusivity.

He said: “The dialogue of the games from the very beginning to the end was about inclusivity, and then to experience that was just like a gaping hole of practice over policy and principle.

“It was just counter to everything that had been said.”

He also pointed to access problems within the accessible viewing area, as some wheelchair-users “really did have to stretch and struggle” to see over the top of the railings, an issue that was also raised at the 3×3 basketball event.

A Birmingham 2022 spokesperson said of the medal ceremony issue: “This is the first time that this has been raised with us.

“Now we have been made aware of this, we will conduct a thorough investigation and reach out to the spectator to communicate our findings.”

She had declined to say by noon today (Thursday) if Birmingham 2022 accepted there had been a problem with wheelchair-users struggling to see over the tops of barriers, and how this had been allowed to happen.

Instead, she provided a statement that was released last week after concerns were raised about access at the 3×3 basketball.

The statement said: “Our games is the first to have a dedicated accessibility team and we have also worked with our accessibility advisory forum to provide feedback to us in planning.

“We work with our venues to continually improve the experience for everyone, and we would encourage spectators to speak to our team to see how we can enhance their visit.”

Picture: The view from the accessible area and (right) Dr Paul Darke at the event 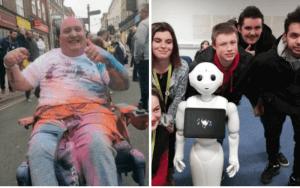