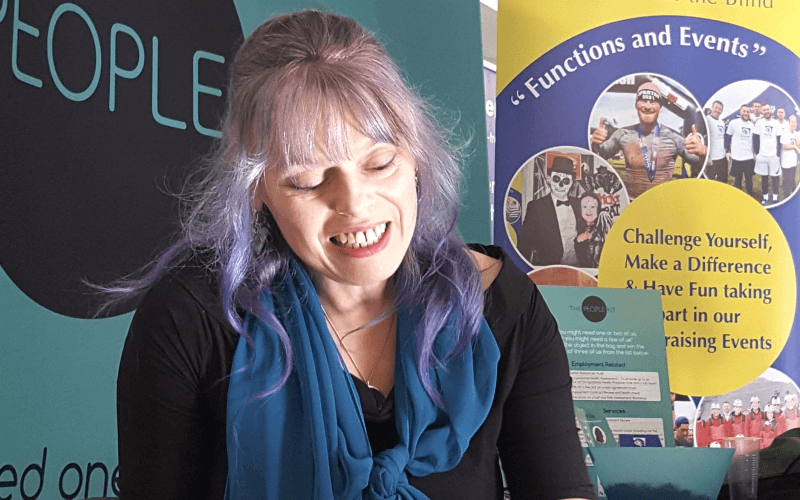 A disabled woman is taking fresh legal action against the government after it failed yet again to ensure that she had an accessible way to vote independently in December’s general election.

Rachael Andrews (pictured) has been trying since 2015 to use the legal system to ensure a way for her and other blind and partially-sighted voters to vote independently and in secret.

She says voting is a “stressful, humiliating and onerous” process that makes her feel like a nuisance.

But after settling that case, she was forced to take legal action against the government.

Last May, she secured a high court ruling that the current provisions for blind voters were unlawful, with the judge declaring that the existing arrangements were “a parody of the electoral process”.

She says the government is breaching her right to a secret ballot without discrimination under the European Convention on Human Rights.

The government has decided, under the Representation of the People Act 1983, that blind and partially-sighted voters can use a tactile voting device (TVD) – a plastic template placed over the ballot paper that is supposed to allow them to vote in secret – to cast their vote.

But Andrews says this system is not fit for purpose because she still needs someone to read her the names of the candidates and the order in which they appear on the ballot paper.

Following the court’s ruling, she expected the government to have introduced a new system, but when she went to cast her vote in December little had changed.

Instead of being read the candidates’ names as she had previously, the polling station’s presiding officer now had an audio recording of the names on his mobile phone, which he played to her.

She then had to use the TVD as normal.

Andrews points to other countries that have systems that allow blind voters to vote using audio booths and telephone voting.

The government has been claiming that it is addressing the issue for at least 18 months.

In November 2018, it said that it consulted with organisations like RNIB “regularly” to “hear about their experiences of voting and recommendations on how government can make elections more accessible”.

This week, 15 months on, the Cabinet Office said again that it was working with RNIB to find a new solution “and improve the voting experience going forward”.

Andrews said: “There was nothing independent or secret about my experience – the bottom line was that I still could not vote without assistance.

“I just want to vote in the same way as everyone else without sticking out or feeling like a nuisance.

“Fully sighted voters are able to breeze in and out in three minutes while I have to undertake stressful, humiliating and onerous processes.

“I can’t believe that in the 11 months since the judgment in my case, and despite all the technology available, that the government has still not come up with an adequate system (or even proposals for a system) that allow blind and visually impaired people to independently carry out one of the most important responsibilities a person has in our democracy.

“It is almost worse now than before the judgment because at least then the government thought they were acting lawfully.

“Now they know they are acting unlawfully, and are aware of the enormous impact it has on people, but have still made no real efforts to address it.”

Kate Egerton, a solicitor with human rights lawyers Leigh Day, who are acting for Andrews in her legal case, said: “The current arrangements enable a blind person to mark the ballot paper, but not to read it.

“There is a statutory requirement to enable blind voters to vote without any need for assistance which is simply not being met.

“Despite the voting arrangements for blind and partially sighted voters being found to be unlawful in May 2019, the government chose to do nothing to sort the matter out before the last general election.

“Our client was, again, unable to vote without assistance on an equal basis to others.

“This was incredibly disappointing for Mrs Andrews who, having won a lengthy legal battle, was essentially left in the same position as she was prior to her legal case.

“We consider that this failure breached our client’s human right to be able to vote independently and in secret.”

A Cabinet Office spokesperson said: “Ahead of the general election we worked closely with specialists and election officials to identify different tools to assist people with sight loss to cast their vote, such as mobile phone apps and video magnifiers.

“We received a positive response from voters and since then have continued working with the RNIB, to test new solutions and improve the voting experience going forward.”

The Cabinet Office said it could not comment on ongoing court cases but said that many people with sight loss use mobile phone apps to read documents, and others carry pocket-sized video magnifiers to help them read.

Returning officers were told, ahead of the general election, that these could be used in conjunction with the TVD, if necessary.

The Cabinet Office also said that the TVD, which has been in use since 2001, works well for some voters with sight loss, but not all of them, and so it was working with its accessibility to elections working group to develop alternative options for the long term.