You are here: Home / Activism and Campaigning / Disabled women tell government: ‘We know who you didn’t save during the pandemic’ 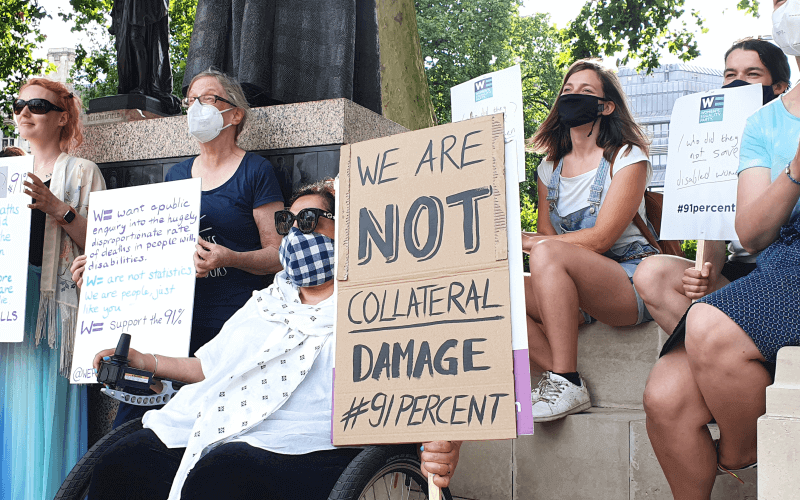 Disabled women faced “death by discrimination” during the pandemic crisis because of the decisions taken by the UK government, protesters in Parliament Square were told this week.

Disabled activists from the Women’s Equality Party (WEP) chanted, “Who did they not save? Disabled women!” beneath a statue of the suffragist Millicent Fawcett on Tuesday, as they drew attention to the government’s failings during the pandemic.

The protest (pictured) marked the end of a 91-hour action spread over the last three weeks, which highlighted research, first reported by Disability News Service (DNS), that showed how working-age disabled women with higher support needs were nearly twice as likely to die from COVID-19 than non-disabled women of the same age.

The research found that this group of disabled women were 91 per cent more likely to have died from COVID-19 than non-disabled women, even after allowing for factors such as underlying health conditions, and whether they lived in poverty, or in a care home.

The research was conducted by the Office for National Statistics and researchers at the London School of Hygiene and Tropical Medicine, but it has been almost completely ignored by the mainstream media.

Freya Papworth, co-chair of the party’s disability caucus, told the protest that the “shameful statistics” had “barely even touched the mainstream news”.

She said: “These statistics are as stark as they are because our government decided that the lives of disabled people… were not worth saving.

“Let’s call this what it is. Death by discrimination.”

A fellow disabled WEP activist, Dr Sarabajaya Kumar, told the protest: “When considering the question of that now-infamous [Downing Street] whiteboard of ‘who do we not save?’ people like me were clearly not considered worthy of saving.

“We would be collateral damage.”

She added: “If we were prioritised by government, the plan to support those of us who were shielding would not have been created as an afterthought in under 48 hours… but it was.

“If we were prioritised by government, very many people would not initially have been left off the vaccine priority list, despite being at far higher risk of hospitalisation and death from COVID-19… but they were.”

The Women’s Equality Party organised the three-week #91percent campaign – named after the 91 per cent figure produced by the research – to call on the government to order an urgent inquiry into the preventable loss of life of so many disabled people during the pandemic, and to ensure there were no further such deaths as the pandemic continued.

But she said many other disabled women who, like her, were clinically extremely vulnerable to the virus, had not been so lucky.

She told DNS: “An awful lot of people do not have friends and networks around them through no fault of their own. They are the ones who have likely died.”

The protest was held on Tuesday, the day after the UK government’s decision to lift most of England’s legal restrictions and social distancing measures came into effect.

Kumar said the government’s decision had made her “extremely anxious” and meant she was effectively going to have to return to shielding, on her GP’s advice.

Papworth told the protest: “It may be the day after ‘freedom day’, but for far too many of our members, coming here to protest in person is too dangerous.

“COVID has not affected everyone equally. In fact, it has proven to be the great revealer, laying bare the inequalities at the heart of our society.

“The legacy of over a decade of targeted cuts, and generations of overt discrimination against disabled people, especially disabled women and people of colour, have borne the brunt of the crisis.”

Another disabled WEP activist, Alison Smith, told DNS that the 91 per cent figure had been “horrifying” because it showed the disproportionate risk of death faced by disabled women, once underlying health conditions and socio-economic factors had been accounted for.

She said the government had done nothing to mitigate the extra risks now faced by those with higher support needs after “freedom day” but instead was just “putting the responsibility on those with higher care needs”.

She said this was a “gross dereliction of duty” and there needed to be an immediate public inquiry into why the government was failing to protect people who were clinically extremely vulnerable to the virus.