You are here: Home / Activism and Campaigning / DPAC defends its left-wing stance, and anti-hate campaigns 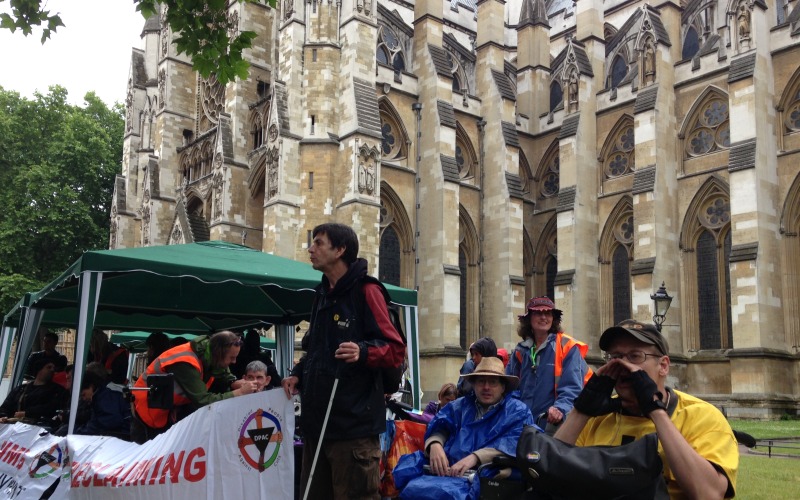 The grassroots anti-austerity group Disabled People Against Cuts (DPAC) has strongly defended its policy of backing campaigns that do not focus solely on fighting for disabled people’s fundamental rights and inclusion.

DPAC has faced criticism from a leading disabled activist and member, who believes the group has aligned itself too closely with left-wing causes and union campaigns, which she  believes has forced it to “compromise” on the disabled people’s rights campaigns and policies that DPAC was set up to support.

Simone Aspis said she was hoping for a wider discussion within DPAC on what it stands for and what kind of campaigns it will be working on in the future.

She said she was concerned that DPAC prioritised attacks on UKIP over supporting disabled people’s campaigning against attacks on inclusive education through the coalition’s cuts and reforms to disabled student’s allowance (DSA).

Aspis, who is campaigns and policy coordinator for The Alliance for Inclusive Education, but was speaking in a personal capacity, said: “DPAC have moved towards campaigning against UKIP when it should be putting its very limited resources into supporting disabled people against all cuts that threaten our inclusion in society.”

In an open letter to other members, Aspis said DPAC had “lost its way through aligning themselves too much with political party and union politics at the expense of working with disabled people on anti-cuts campaigning and retaining its principles”.

And she added: “I have had national DPAC steering committee members who are union members condemning me for not wanting to join a picket line to support college staff cuts when their roles were to provide segregated education for disabled learners with learning difficulties.”

Aspis said her concern was that the left-wing political parties and unions that DPAC worked with closely did not always support disabled people’s rights “at a fundamental level”, such as committing themselves to inclusive education or opposing residential institutions.

Aspis said: “I don’t think they should be campaigning against UKIP when their limited resources should be used to work with disabled people’s campaign work that supports our inclusion.

“I have no problem with disabled people campaigning against UKIP; just set up a separate organisation so we can be clear.

“What could be the strength of the campaign is that we have disabled people from all political affiliations getting stuck in, in terms of campaigning against the cuts.”

She said she had “decided to disengage with DPAC activity until the issue has been resolved to everyone’s satisfaction”.

But DPAC has responded strongly to her concerns, and made it very clear that it is a left-wing organisation without allegiance to any political party or union.

In a detailed, written response to questions raised by Aspis, DPAC’s national steering group said they decide “on a case by case basis whether to support any campaign, and we support disabled people and their rights, not unions”.

But they also made it clear that DPAC was “specifically set up to work with the left and trade unions to ensure that the politics of disabled people’s rights are at the heart of their activity”.

And they said it would not be right to “write off” disabled people who have no previous exposure to disability politics, so they prefer to “work with them and those they are campaigning with to educate, raise awareness and change attitudes”.

One DPAC steering group member said she had had a “really useful conversation” with some of the striking college staff who worked on segregated courses.

She said: “They’d never had the arguments put to them before and we ended up agreeing that inclusive education is what we should be aiming to achieve.”

The steering group added: “The real world that DPAC inhabits is a complex place and sometimes if you are really serious about change and building properly inclusive communities, it is necessary to build on the foundations of an imperfect situation rather than simply not engaging.”

They also pointed to the Conservative promise to make another £12 billion in cuts to social security spending, and the “growing social care black hole”.

The steering group added: “Those of us either directly impacted ourselves or who work every day with people suffering under the cuts, people without money to eat, people going without access to the toilet or to water for hours on end due to lack of support, understand the importance and the strain of supporting people to fight for their basic human rights even where we don’t one hundred per cent agree with their interpretation of disabled people’s rights.”

DPAC has also strongly defended its decision to campaign against UKIP, because its constitution allows the steering group to “oppose organisations and parties that promote discrimination, and UKIP is one such organisation”.

The steering group insisted that DPAC had supported the legal action around the DSA cuts, but decided to focus on other areas because the case was already in the “very capable hands of a solicitor”.

They said: “DPAC are committed to inclusive education as a fundamental principle of independent living, as outlined in the joint Reclaiming Our Futures Alliance manifesto.”

The steering group added: “We can’t do everything but we are amazed at the idea that the dramatic rise of the far right across Europe and the agenda of division hate gaining traction in the UK is not a valid concern for disabled people.”

And they pointed out that one UKIP council candidate had suggested “compulsory abortion” if a foetus was “detected as having Downs, Spina Bifida or similar syndrome which, if it is born, will render the child a burden on the state as well as on the family”.

Another former UKIP prospective parliamentary candidate said abortions for women carrying children with impairments such as Down’s syndrome and spina bifida “might be the best thing”.

Aspis said that Labour, the Liberal Democrats and the Conservatives had all been responsible for legislation aimed at “preventing disabled people being born” – around embryos and fertility – so “why only pick on UKIP?”

But the steering group added: “We also know what happened to disabled people under Nazi fascism.

“It’s called solidarity and is the most fundamental tool for those without power in society to force change.”