You are here: Home / Activism and Campaigning / DPAC issues tactical voting plea to save country from five more years of Tory rule 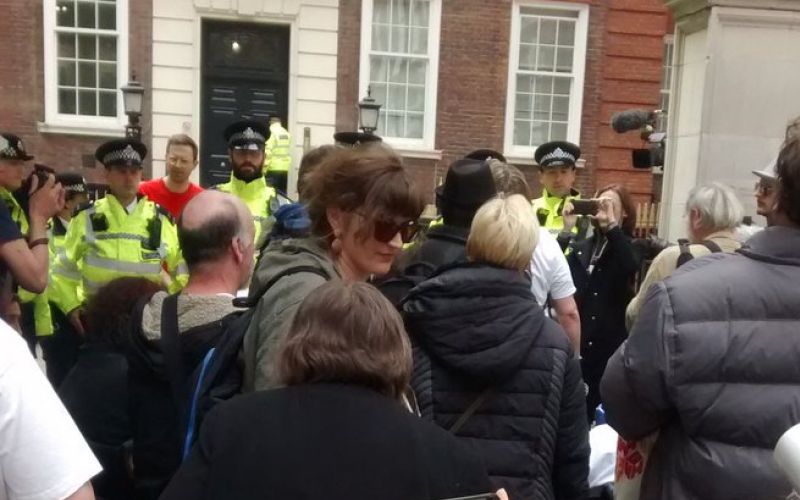 Anti-cuts activists have called for disabled people to vote tactically at the general election, in a bid to remove the Conservative party from power.

Disabled People Against Cuts (DPAC) launched a campaign this week to “unseat” the Tory government, with a protest outside the party’s election headquarters in Westminster (pictured).

Although they failed to achieve their aim of occupying the building, they blocked traffic near Westminster Abbey for about an hour, in one of a series of DPAC protests likely to take place in the lead-up to the general election on 8 June.

Among DPAC’s plans for further protests during the election campaign is to make a “social visit” to the Maidenhead constituency of prime minister Theresa May on 3 June.

The campaign will draw attention to last November’s damning report by the UN’s committee on the rights of persons with disabilities, which found the UK government’s social security reforms had led to “grave or systematic violations” of the UN disability convention.

Linda Burnip, co-founder of DPAC, the grassroots network of disabled people that persuaded the UN to carry out its inquiry, said: “The government are supposed to make sure it is highly publicised [but] they have buried it.”

She said the report “vindicated everything we had been saying for the last seven years.

“It is an international body saying it, this time, not just us, and it is proof that it has happened and is happening: the cuts to social care, the loss of a right to independent living, the loss of satisfactory income levels.”

DPAC says the cumulative effect of seven years of Conservative cuts has left disabled people “at the mercy of degrading and flawed testing regimes, while a growing number are trapped in their homes without access to food and water for hours, reliant on foodbanks to eat and expected to rely on incontinence pads as a substitute for support to use the toilet with dignity”.

Burnip said DPAC would be asking disabled people to vote tactically to defeat Tory candidates, which would include backing some Liberal Democrats.

She said: “There are so many people who just could not take another five years [of Tory government].”

She said another five years would lead to “further dismantling and privatisation of the NHS”, including cuts to wheelchair services and mental health services, longer waiting-lists and fewer accident and emergency departments, as well as further cuts to benefits, worsening working conditions, and “more attacks on young people, women and disabled people”.

She said: “What we are really saying to people is you need to vote, you need to use your vote.

“We need to make sure the voting power of disabled people is recognised and political parties take our views into account.”

Ellis had previously run the Conservative Disability Group’s (CDG) website and had been a Conservative voter for nearly 50 years, but left a message on the CDG home page after the Osborne budget saying: “This website is temporarily closed owing to Disability Cuts.”

Ellis, who founded the Lancaster-based welfare rights advice social enterprise Here2Support, said this week: “No disabled person or family and friends should vote for any party that threatens to make our lives unliveable through draconian health, care and welfare measures.

“The number of disabled citizens using food banks is beyond belief.”

He said voters should abandon any party that flouts international treaties on disability rights, as the Tories have done with the UN disability convention.

Ellen Clifford, a member of DPAC’s national steering group, said: “The cowardly bully Theresa May wants us to believe that she offers strong and stable leadership but there is nothing strong or stable about persecuting disabled people.

“DPAC are not surprised that May has chosen to avoid debate in this election as she would be called upon to defend the indefensible actions of her nasty government.”