You are here: Home / Activism and Campaigning / DPAC targets marginal seats with quartet of films on austerity impact 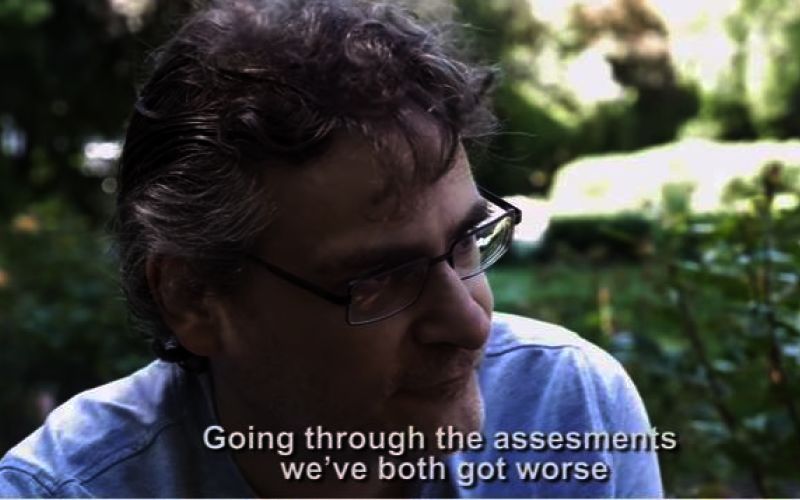 Anti-cuts activists have produced four films that show the impact of austerity on disabled people, in a bid to boost Labour’s chances in 50 marginal constituencies in the run-up to election day.

Each of the short films being used by Disabled People Against Cuts (DPAC) features a disabled person who has been personally affected by cuts imposed by the Conservatives in government.

DPAC is hoping the films will be shared widely through social media, but it is also spending thousands of pounds to promote them through Facebook adverts targeted at about 50 marginal constituencies being fought over by Labour and the Conservatives.

In one of the films, David Hooke (pictured) describes how his health and that of his brother – they both have mental health conditions – has worsened as a result of the government’s system of benefit assessments.

He says his brother now leaves their flat less often and has more frequent panic attacks because of his assessment experiences, and adds: “He’s more worried about what’s going to happen with his money.

Jenny Sealey, artistic director and chief executive of Graeae Theatre Company, describes in another of the films how government cuts to Access to Work (AtW) mean she will lose 60 per cent of the AtW support she currently uses to pay for interpreters.

A cap on payments was introduced for new AtW claimants in 2015 and is due to affect existing claimants like Sealey from April 2018, limiting annual AtW awards to one-and-a-half times the average salary.

In another film, Andria, a disabled single parent who has several long-term mental and physical health conditions, describes how she has had repeated face-to-face meetings over the last five years with Department for Work and Pensions staff and employees of the government contractor Atos.

She highlights the billions of pounds wasted on benefits assessments and the appeals process.

She says: “The most important thing that has happened is that my health has really, really deteriorated as a result of going through this process where I live in utter fear each and every day of becoming completely impoverished, while I’m in this state, trying to raise a daughter, pretty much on my own.”

The fourth film hears from Jenny Hurst, who works as a personal budget coordinator for Action on Disability, in Kensington and Chelsea, London.

She says that she could have to quit her job because AtW is forcing her to contribute £5,000 towards the powerchair she uses at work.

Linda Burnip, a DPAC co-founder, said the “powerful” films showed “how ridiculous the claims are that [the Conservatives] are helping disabled people into work or they want to support disabled people”.

She said the Facebook campaign would cost more than £5,000, with most of that coming from DPAC’s existing funds, as well as about £1,500 donated by unions in the last few weeks.

In total, DPAC expects to spend about £10,000 on the election campaign, including funding travel to events, organising meetings, paying for the Facebook adverts, and printing stickers and about 15,000 leaflets that have been shared around the country.

She said DPAC felt that the Facebook adverts were “an easy way to reach a large number of people who are not our normal supporters”.

She said DPAC had decided that it was a “now or never moment” to either use the funds or “sit back and regret it” if the Tories won the election.

And she thanked all those who had contributed “time, effort or money” to the campaign.

The films were produced free of charge by film-maker Anthony Swords and his media production company Tough and Rumble.

Swords said at the launch of the films in the marginal constituency of Croydon Central this week that he had wanted to target “soft Tory voters or swing voters, middle England, who aren’t aware of what’s happened” to disabled people.

Burnip said almost nothing had been said by disability charities during the election campaign, partly because of their fears of breaching the Conservative government’s Lobbying Act 2014, which restricts what they can say in the lead-up to an election.

This week, more than 50 charities wrote to party leaders to raise serious concerns about the act and to call on the next government to reform it.