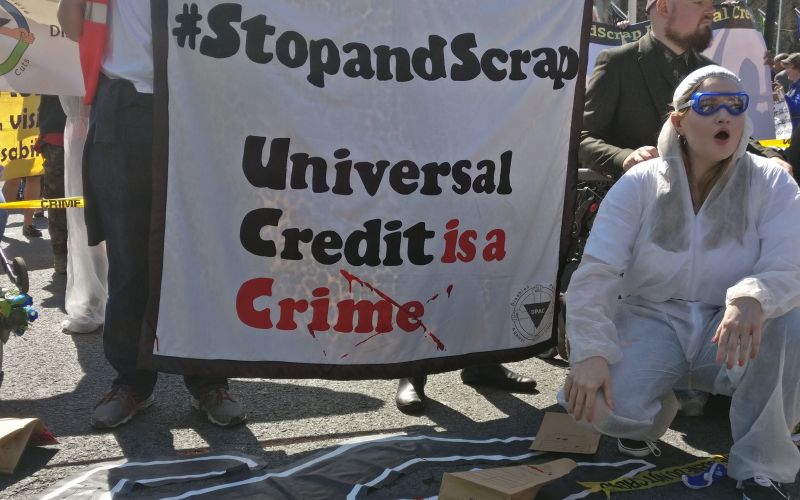 Disabled activists are hoping their latest protest in the heart of Westminster will empower other disabled people to follow their lead and fight the government’s social security cuts and reforms.

The action by Disabled People Against Cuts (DPAC), which involved scores of disabled protesters, focused on calls for the government to scrap its new universal credit working-age benefit system, which is being rolled out across the country.

DPAC believes universal credit has “too many flaws to be simply paused and fixed” – the solution proposed by the Labour party – and is “rotten to the core”, with foodbank use and rates of claimants being sanctioned “soaring” in areas where it has been introduced.

The action saw one group of activists occupy parliament’s central lobby and attempt to interrupt prime minister’s questions in the House of Commons.

After their path to the Commons chamber was blocked by five police officers, they repeatedly chanted “stop and scrap universal credit” and “benefits not bombs” as prime minister’s questions was taking place.

They later joined a larger group of activists opposite the Houses of Parliament, before marching to a traffic crossing in front of the House of Commons, where they blocked the road for more than half an hour.

One protester was dressed as a crime scene investigator (pictured), beside a banner which said: “#StopandScrap. Universal Credit is a Crime.”

The outline of a “murder victim” placed on the road had earlier been laid on the floor of parliament’s central lobby.

Andy Greene, a member of DPAC’s national steering group, said at the start of the protest that he hoped other disabled people and the public would pay attention to the action.

He said: “This is about continuing to show that disabled people will not be passive recipients of these changes.

“We will continue to resist them at every opportunity and represent the interests of people who cannot be here but would want to say something if they were.”

But he added: “It is not enough to hear, you also have to respond, whether that is speaking to your local councillor, writing a letter to the media, calling up talk shows, taking direct action or joining a local group; whatever it is, we want people to respond.”

Greene said councils were not being given the resources to cope with the results of austerity, while the voluntary sector “has had its teeth pulled in terms of capturing what is going on and being able to respond to that.

“We are seeing that it is only through activism that we have been able to see any consistent, empowering response, which is why we are here today.”

He said the introduction of universal credit had the potential to be the most harmful of all the government’s social security cuts and reforms, putting not only people’s income at risk but also “the roof over their head”.

Disabled people are “right at the centre of that”, he said.

At the end of the protest, Greene said he believed that years of high-profile protests by DPAC – which was formed in 2010 – had encouraged many other disabled people to take part in local and national demonstrations.

He said: “That’s how I judge our success. People see themselves reflected in these demos. There is no myth, no secret. We turn up and we take part. That’s it.”

Labour MP Laura Pidcock* supported the protesters as they blocked traffic outside the House of Commons, and said the action was “absolutely necessary”.

She said: “Sometimes when people won’t listen, what else are people supposed to do?

“I am very supportive of any demonstration when people feel a government will not listen.”

She said the rollout of universal credit had begun in her North West Durham constituency in December and there had already been threats of eviction.

Although she did not say she wanted to scrap universal credit, she said her party needed to “have a conversation” about how it was working.

She said that people who were experiencing universal credit themselves knew the government’s claims that it would be a simpler system and would provide a faster route into work were “not true”.

She said: “There has to be an overall assessment of, ‘is this the best that Britain has to offer in terms of social security?’”

Marion Nisbet, of Glasgow DPAC, had travelled by train from Scotland to take part in the protest in London.

She said she has been “part of the fightback” since she was asked in a work capability assessment (WCA) in 2011 why she had not killed herself, when discussing her suicidal feelings with an assessor working for the government’s contractor Atos.

She said: “I walked out thinking that that was what I was going to do. I felt totally humiliated and worthless.”

She said the WCA process – which is part of the universal credit system – was “nothing to do with empowering people back into employability” but was “state-sanctioned cruelty”.

She said: “As an unemployed disabled worker, there is nowhere I would rather be than at my work, but we have an Equality Act that is not worth the paper it is printed on when it comes to the employability of disabled people.”

She added: “I am sick and tired of watching sick and disabled people paying for the fact that the bankers ran away with the money.

“This has been an ideological, financial attack on disabled people, labelling them scroungers and skivers so everybody is convinced we are all at it and [that attack] needs to happen.”

Another disabled campaigner, Kay Nosae, said she had attended the demonstration because she wanted “to be doing something, to feel I have some power”, and to try to affect some of the many people walking past the protest in Westminster.

She said: “It is also partly all the history of disability protest. I want to feel I am carrying on the tradition of trying to do something, not just being passive and letting other people fight for us.”

Another reason she attended was because of her concerns about the removal of disability premiums in the move to universal credit.

She said: “The government said that no disabled person would lose out but obviously they have.”

She said she had spent days in bed before the protest and would probably spend days in bed recovering afterwards.

She added: “I cannot plan for my future because I don’t know how the benefits system is going to change.”

Gabriel Pepper, who took part in the lobby action, said universal credit was “a juggernaut”.

He said he believed the government did not care about the impact of universal credit, and was intent on rolling it out and its harsh conditionality while closing scores of jobcentres.

He said: “That combination is toxic. What do they think will happen?”

Other protests as part of DPAC’s day of action against universal credit took place across the country, including actions in Manchester, York, Sheffield, Norwich and Brighton, with others planned in Truro, Birmingham, Leicester, Edinburgh and Cardigan, Wales.

The Department for Work and Pensions (DWP) has been insisting since 2012 that “transitional protection” would ensure that no-one moving onto universal credit would see their benefits cut in cash terms.

But campaigners have remained sceptical, while also pointing out that the transitional protections will not apply if there are changes in the disabled person’s personal circumstances – for example if they move to a new home, or their relationship status changes – and will not apply to new claimants.

Despite repeated requests from Disability News Service to clarify exactly how disabled people will be affected by the removal of the premiums under UC, DWP has so far been unable to do so.

in less than two weeks, the high court is due to hear a judicial review of the financial impact of the introduction of universal credit on a terminally-ill man who has lost £178 per month in disability premiums after he moved back to London to receive treatment and had to claim UC for the first time.

*Pidcock said she had accompanied members of DPAC to a “very frustrating” meeting on Tuesday with Sarah Newton, the minister for disabled people, about concerns about disability benefit assessments.

She said Newton had been “very, very dismissive” and although the minister was considering some recommendations made by this year’s report by the Commons work and pensions committee into the assessment processes, had refused to remove the PIP assessment contracts from Atos and Capita.

She said: “I know they have a certain vision of the welfare state but I thought if I could meet with them on a human level and explain how difficult it is for people… but it didn’t make a difference.”