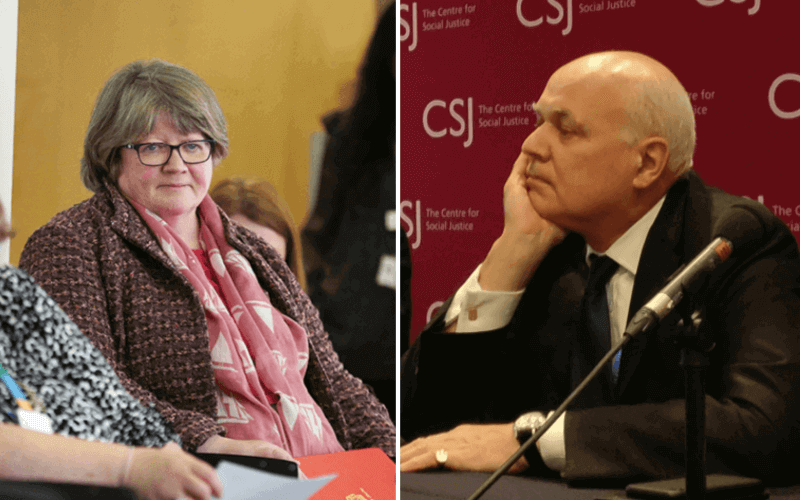 Work and pensions secretary Therese Coffey has failed to sign up to her own much-criticised disability employment scheme, Disability Confident, her department has admitted.

The Department for Work and Pensions (DWP) has also admitted that Sir Iain Duncan Smith, who launched the scheme in 2013, when he was work and pensions secretary, has never become a member.

A DWP freedom of information response also shows other current and former work and pensions ministers apparently scrabbling to sign up after Disability News Service (DNS) first began asking questions about whether they were members of the scheme in the first week of March this year.

Like all MPs, Coffey (pictured, left) employs staff to assist with her parliamentary and constituency duties, which are separate to her role as secretary of state.

In an article she wrote last November, Coffey stressed the importance of Disability Confident, which she said “encourages employers to think differently about disability and to take action to improve how they attract, recruit, retain and develop disabled employees”.

But DWP has no record of either Coffey or Duncan Smith ever having signed up to the scheme.

DWP claims that, even though Coffey’s duties as an MP are separate to those she has as a minister, she is included in DWP’s own membership of the scheme and that DWP ministers are considered to be “signed up to the principles” of Disability Confident.

This is despite the fact that other DWP ministers, including current minister for disabled people Justin Tomlinson, employment minister Mims Davies and pensions minister Guy Opperman – along with scores of other cross-party MPs – had all signed up to the scheme before DNS began asking questions in March.

The freedom of information response also reveals that Duncan Smith has never signed up to the scheme, even though he helped launch it as work and pensions secretary in 2013 and, like other ministers, he employs staff to help with his duties as an MP.

In 2015, two years after the scheme’s launch, he praised employers who had signed up to Disability Confident and said its success was “clear to see”.

DNS has confirmed that neither Coffey nor Duncan Smith (pictured, right) has ever been listed by DWP as a member of Disability Confident.

DWP claims it only holds records showing when current and former ministers “most recently registered for, or renewed their registration”.

Four current and former ministers have registration or renewal dates in March this year, days after DNS began asking questions on 3 March.

Will Quince, the minister for welfare delivery, signed up two days later, on 5 March.

Esther McVey, who claims to have created the Disability Confident scheme herself in 2013 – when she was minister for disabled people, under Duncan Smith – and has repeatedly called on employers to sign up, finally signed up herself on 10 March 2020.

Two other former ministers for disabled people, Mark Harper and Maria Miller, also signed up for the first time in March this year, Harper on 20 March and Miller seven days later.

None of the four were previously members of the scheme.

“Some also sign up individually in their capacity as Members of Parliament who employ staff.”

The discredited scheme aims to encourage employers to “think differently about disability and take action to improve how they recruit, retain and develop disabled people”.

Coffey had not responded to a request to comment by noon today (Thursday).

Duncan Smith sent a statement claiming that “as a founder member” he was “very proud” of the scheme and would “continue to support it in every way I can”.

But after DNS asked his spokesperson how he could have been a “founder member” when he had never joined the scheme, he failed to comment further.

“And equally predictable that DWP would try and claim she is covered by their own registration.

He added: “DWP was deeply problematical even before the Tories came to power, but under IDS the rhetoric of disabled people as lazy fakers was enshrined as departmental policy and no secretary of state since him has seen fit to change that.

“It’s no surprise that IDS is another senior Tory who sees no reason to sign up to support his own party’s disability policy.”

Three years ago, DWP declared itself a gold-standard employer of disabled people under the scheme – securing the status of “Disability Confident Leader” – just days before being found guilty of “grave and systematic violations” of the UN disability convention.

Earlier this year, a BBC Panorama investigation revealed that DWP lost more disability discrimination cases at employment tribunal than any other employer in Britain in the three years since 2016.

Asked why he had only signed up to Disability Confident after DNS began asking questions in March this year, Quince declined to comment.

Harper, Miller and McVey had all failed to comment by noon today (Thursday).