You are here: Home / Benefits and Poverty / DWP handed petition of 200,000 names on benefit assessment travel 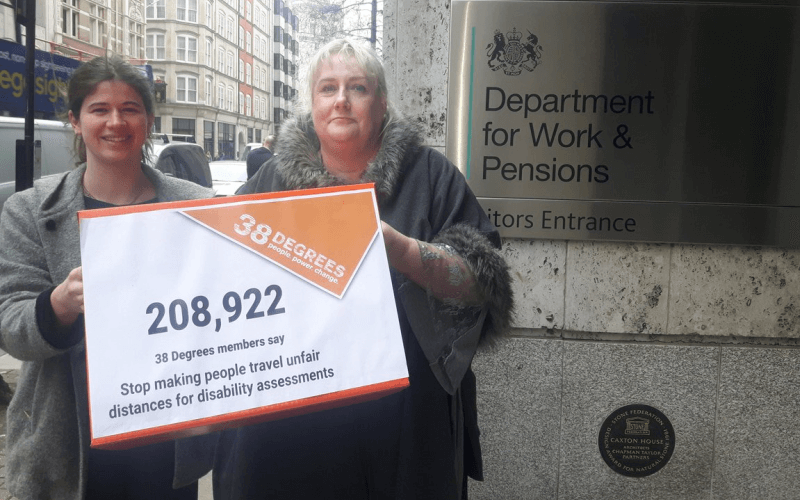 A disabled woman has handed the Department for Work and Pensions (DWP) a petition of more than 200,000 names in a bid to stop companies forcing claimants to travel long distances to attend face-to-face benefit assessments.

Claudette Lawrence only launched the petition on the 38 Degrees website in November, but by yesterday (Wednesday) it had been signed by more than 213,000 people.

She started the campaign after becoming increasingly concerned about the distances disabled friends were being asked to travel to attend face-to-face assessments with disability assessment contractors Maximus, Atos and Capita.

But she is also concerned about disabled people being charged up to £40 by their GPs to write a letter explaining why they need a home assessment, rather than having to travel to an assessment centre for their eligibility tests for personal independence payment (PIP) or employment and support allowance (ESA).

Lawrence says in her petition: “People who are on benefits due to ill health, cannot afford to pay for private letters.

“There is a risk that people who are entitled to PIP or ESA will lose out, causing hardship and suffering.”

Last week, Lawrence (pictured, right) and Lorna Greenwood, campaigns manager for 38 Degrees, were at DWP’s headquarters in London to discuss the issues and hand the petition to civil servants and a special adviser to work and pensions secretary Amber Rudd.

Lawrence told Disability News Service (DNS) that a friend of hers from Thamesmead in east London had been asked to attend a work capability assessment in Wembley, on the other side of the capital in north-west London.

Another friend, from Charlton, in south-east London, had been asked to attend an assessment in Southend, on the Essex coast.

Lawrence said: “It’s just not right. The whole process is unfit for purpose.”

She said she had been expecting a strong response to her petition but had been “absolutely shocked” by how many people had signed it.

One of the disabled people who signed the petition said: “I have a long term mental health disorder and I was expected to take a journey with my baby which would involve three buses and two trains.

“When I rang to say I couldn’t cope with even walking out of the door, let alone figure out the details of a very expensive journey, they treated me with contempt and rudeness.

“They ignored my doctor’s letter. Needless to say they decided in my absence that I was fit for work.

“Luckily my local DEA [disability employment adviser] saw the truth and made up for their nastiness.”

Another said: “They make people travel a great distance then say if you can travel this far then you are fine.”

And a third said: “I have had to travel for an assessment be completely unable to move for a week afterwards [and was then] turned down.”

And one said simply: “I was asked to attend an assessment in Milton Keynes and I live in London!”

A DWP spokesperson declined to say what action the department would take in response to the petition.

But she said in a statement: “We want everyone to have a good experience at their PIP or work capability assessment.

“Whenever we can we will make benefit decisions using paper evidence so that people don’t need to travel to an assessment.

“Anyone we need to see in person who is not able to travel to an assessment centre can request a home assessment.

“Wherever possible our assessment providers will use supporting evidence which does not incur a fee to claimants.

“No one is required to travel for more than 90 minutes by public transport to their assessment.”

Five years ago, MPs on the Commons public accounts committee used evidence collected in a lengthy investigation by DNS and the disabled journalist Richard Butchins to accuse Atos of lying in the document it used to win a £184 million contract to provide PIP assessments across London and the south of England.

Atos had won the contract by boasting of its “extensive” network of 16 NHS trusts, two private hospital chains, and four physiotherapy providers, all of which it said would provide sites where the PIP tests would take place.

But in the months after the contract was awarded, all but four of the NHS trusts and both of the private hospital chains dropped out.

Atos had stated in the tender that it had a network of 740 assessment sites across London and the south of England.

But after the contract was signed, it only managed to secure 96 assessment centres, including not a single one covering a vast sweep of north London, and only one in Suffolk and one in Cambridgeshire, although it has since improved these numbers.