You are here: Home / Benefits and Poverty / DWP sanctions claimants ‘by any means necessary’, MPs are told 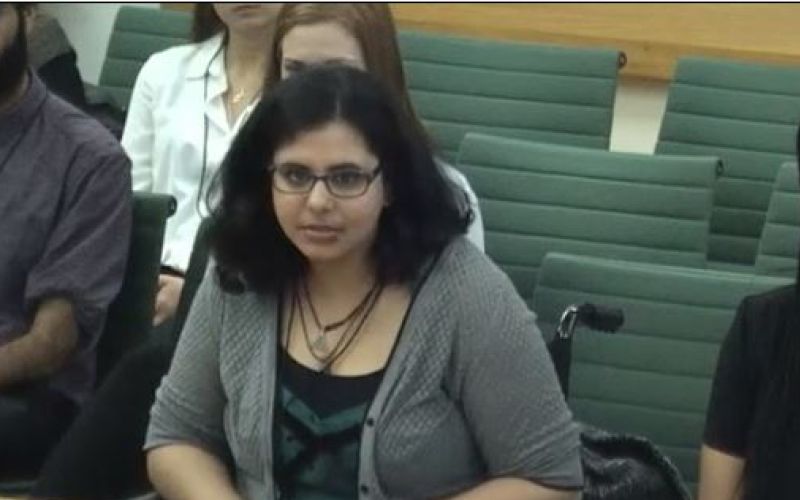 A disabled campaigner has told MPs how she was thrown out of a shelter and forced to sleep in her college library after she was unfairly sanctioned by the Department for Work and Pensions (DWP).

Jen Fidai described yesterday (Wednesday)* how she spent nearly a year with no benefits after being wrongly sanctioned while studying for her A-levels in 2012, and was forced to leave the temporary accommodation where she had been staying.

She had to rely on friends for somewhere to sleep, or even the library at the sixth form college where she was studying, which also provided her with food during the day.

It later emerged that she had been placed on the wrong benefit and should not have been claiming jobseeker’s allowance.

Fidai (pictured), who is now chief executive of the LGBT mental health charity Rainbow Head, told the Commons work and pensions select committee that she had tried to explain the situation to the jobcentre “but they wouldn’t listen”.

She told Disability News Service later: “I left home shortly after starting sixth form college, and sofa surfed with friends and classmates for a little while.

“When I couldn’t find anywhere to stay, I’d sleep in the library at college during free periods and lunch, and then ride the night buses so that I kept moving.”

The committee was holding an evidence session as part of its inquiry into the system of benefit sanctions.

Fidai delivered a fierce attack on the way DWP runs its sanctions system.

She told the committee: “If you’re someone who doesn’t understand the benefits system, if you’re not someone who is able to shout for yourself and scream and kick and cry until they help you, you are left there on the side of the street with nothing.”

Fidai said she had later been left “knocked out on morphine” after an accident but that the jobcentre still “didn’t care”.

She said: “They still expected me to be there on time every time, and to not fight them, and accept whatever sanctions they gave me, and to be a quiet person who just took whatever they wanted to throw at you.”

She said the attitude of jobcentre staff had left her feeling “so unsafe going into a horrible environment” and “so scared to speak up”.

She added: “If you ask them for help they will say, ‘No, we will punish you instead.’”

Under the sanctions system, benefit recipients have part of their payments temporarily stopped if they fail to meet strict work-related conditions, such as failing to attend a work placement, or being a few minutes late for a jobcentre appointment.

Luke O’Donnell, who receives universal credit (UC), told the committee how he had been sanctioned by DWP after missing a work-related meeting in a week in which he had been hospitalised twice because of multiple seizures.

DWP had refused to reconsider its decision to sanction him – even though he showed the jobcentre proof of his hospital admissions – and only changed its mind after his story secured national media attention in March.

He told the committee he believed that sanctions were being “handed out like free sweets”.

He said: “I was that disgusted because in my opinion it shows a culture of sanction by any means necessary and for as much as you can possibly get away with.

“It’s almost as though these people are working to a commission.”

He added: “There’s a very faceless and cold side to the DWP especially since UC has come in. If feels like it has been rigged to save money, not to help people.

“This is a social security system, it is supposedly there to help those most in need in our society but now I think it has more been designed to work against people then to help them.”

A third witness, Samantha, told the committee how she had been sanctioned in 2016 because she had moved to a part-time job from full-time work, and decided to move onto universal credit.

She said she had only moved to a part-time job because of her responsibilities as a single mother, and only survived financially after being sanctioned with help from her family and by using foodbanks.

She described how she had found herself in a “cycle of begging for money and food and handouts”.