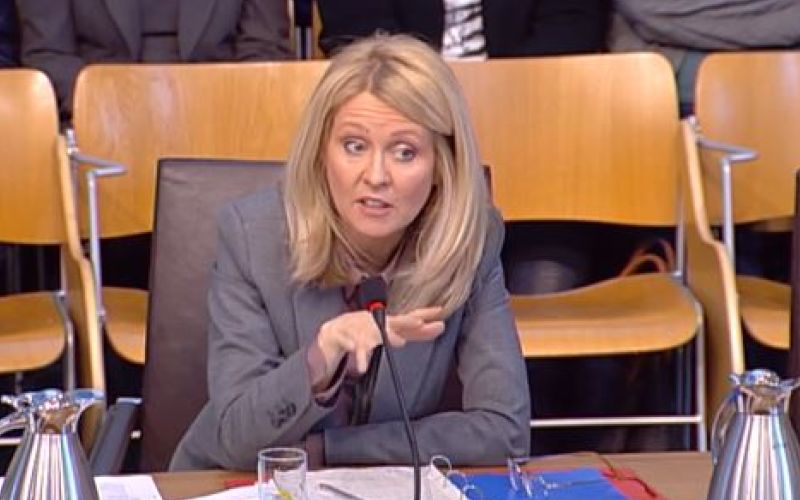 The decision of some disability charities to sign contracts that prevent them criticising the Department for Work and Pensions (DWP) is proof that they cannot be trusted to speak up on behalf of disabled people, according to grassroots activists.

Last week, Disability News Service (DNS) reported that – in exchange for lucrative government contracts under the Work and Health Programme – some organisations have promised to “pay the utmost regard to the standing and reputation” of work and pensions secretary Esther McVey (pictured).

They have also promised in the contracts that they will never to do anything that harms the public’s confidence in McVey or her department.

So far, Shaw Trust, Leonard Cheshire Disability and RNIB have confirmed that they have signed contracts – either with DWP or with one of the five main Work and Health Programme contractors – that include clauses that prevent them bringing DWP and McVey into disrepute.

Shaw Trust is itself one of the five main contractors and has signed up to DWP’s contract and its “publicity, media and official enquiries” clause.

RNIB has signed agreements as a subcontractor with Shaw Trust that say that it must have “regard to the standing and reputation” of DWP, do nothing to bring McVey and her department into disrepute in delivering those contracts, and must not “attract adverse publicity” to them.

Leonard Cheshire said this week that its involvement in the programme was “extremely limited” and restricted to providing support in two London boroughs, but admitted that there was “a clause in our contact with Ingeus related to actions that brings Ingeus/DWP into disrepute”.

It insisted that the clause “would not affect what we say publicly on issues related to the DWP or wider campaigning” and that it had no other contracts with similar clauses.

It has so far declined to share the clause with DNS.

Other disability charities that appear to have agreed to act as key providers of services under the Work and Health Programme, such as Action on Hearing Loss and the Royal Association for Deaf People*, have refused to answer questions about the contracts and clauses they might have signed up to.

Another, Turning Point, said that it had “in principle partnership agreements with a number of organisations delivering the programme to provide specialist support when and if needed” but had “not been presented with nor asked to comply with such a clause”.

By noon today (Thursday), Turning Point had failed to say if it expected to sign contracts at some point, which contractors it had agreements with, and whether it was concerned about the presence of the clause in contracts signed by the main Work and Health Programme contractors.

Other charities mentioned in the contract documents, including Mind, Rethink and Carers UK, made it clear this week that they had not signed any Work and Health Programme contracts.

But a spokesperson for the Reclaiming Our Futures Alliance – a network of disabled people and their organisations across England, whose members include Sisters of Frida, Equal Lives, Inclusion London and Disabled People Against Cuts – said the clauses were “further proof that disabled people cannot trust the charities to speak up for our best interests and that they put their financial interests ahead of the people they purport to represent.

“Since 2010 the charities have consistently let themselves be used as cover by the government while they have continued to systematically dismantle our rights.

“They have failed to speak out in any way that is appropriate given the severity of the situation we are facing.

“Disabled people have many criticisms of the Work and Health Programme and the dangerous policies associated with it.

“We can now add to that list that it is being used as a tool to buy silence.”

There are major concerns about the Work and Health Programme, which is part of the government’s much-criticised Improving Lives work, health and disability strategy, with its “cruel and disastrous” emphasis on “work as a cure”, the placement of employment advisers in health services, and the continued use of benefit sanctions to “punish” disabled claimants.

But the Disability Benefits Consortium, whose 80-plus members include Action on Hearing Loss, Leonard Cheshire, and RNIB, and which often speaks out on DWP issues, failed to raise any concerns.

Its co-chairs refused to say this week if they were concerned that the clauses could harm the ability of the consortium or its members to criticise the government.

Laura Wetherly and Phil Reynolds, DBC’s co-chairs, insisted that the consortium was “independent” and does “not hesitate to call for change when it is needed”, and that the coalition itself “is not signed up to these clauses”.

They added: “The DBC cannot speak for or comment on behalf of individual members.”

When asked whether they and the consortium were concerned about the clauses, they refused to comment.

Kristiana Wrixon, head of policy at ACEVO, said she had been concerned to read the DNS report, and said that her organisation was now seeking clarification on the purpose of the media clause from DWP.

She said the clause in the contracts signed by the main providers was “ambiguous and therefore open to wide interpretation”.

She said: “The Department for Work and Pensions should clarify the purpose of the clause and publicly reassure those involved in the delivery of the programme that it is not meant to restrict campaigning and advocacy activity.”

NCVO refused to say if it was concerned about the clause but said that it would be talking with its members “about how they’re working with the clause”.

*An earlier version of this story said that Down’s Syndrome Association had refused to answer questions from DNS. This was not correct. The charity did not receive two emails containing questions about the Work and Health Programme, due to a mistake made by DNS. The charity has made it clear that it does not have formal links with the DWP and has not been asked to sign any Work and Health Programme contracts. Apologies for the error.