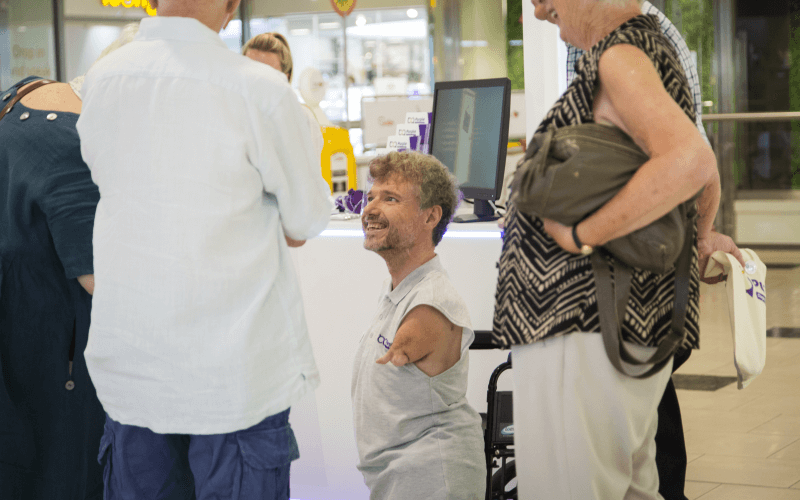 Disabled activists have called for a boycott of the UK’s first accessible shopping day because of its close links with the Department for Work and Pensions (DWP) and fears that CCTV footage could be used to dispute disability benefit claims.

Purple, the social enterprise formerly known as Essex Coalition of Disabled People, has secured the support of DWP for next week’s Purple Tuesday event but has denied that there is any “hidden agenda”.

Tuesday’s (13 November) event has also secured at least 14 high-profile partners, including retailers M&S, Sainsbury’s, Asda and Argos, and shopping centre owners such as intu and Landsec.

One of the partners, intu – which owns and runs shopping centres across the country – today (Thursday) refused to promise not to pass CCTV footage from the event to DWP, while Sainsbury’s has refused to answer questions.

Purple is hoping to engage with another 500 retailers across the country, all of which will be asked to make at least one pledge to improve the experience of their disabled customers and show a video to their staff that describes five ways they can improve their customer service for disabled people.

But Disability Labour, which represents disabled people who are members of the Labour party – but is independent of the party itself – has called for a boycott of the event.

It has raised fears that those companies taking part could pass CCTV pictures from the day to DWP to use against disabled people who have made benefit claims.

It highlighted how Sainsbury’s has previously admitted that it occasionally passes CCTV pictures to DWP.

Fran Springfield, co-chair of Disability Labour, said: “Disability Labour are deeply concerned that the DWP, which harasses and persecutes disabled people on a daily basis, will use video footage to identify if claimants are shopping, what they’re purchasing and even how far they are walking.”

She said the potential of retailers sharing CCTV from the event with DWP was a “huge concern” for disabled people.

Springfield said: “I don’t trust DWP any further than I can throw them because of the way they have treated people.”

She said Disability Labour was “dismayed” at the involvement of retailers in the campaign.

“Their surveillance of disabled people has led to increased distress and isolation.”

Disabled People Against Cuts said it supported Disability Labour’s concerns because it had been told of a small number of cases in which disabled people had lost their entitlement to benefits in transferring from disability living allowance to personal independence payment after being found to be “able to go shopping in their wheelchairs”.

Mike Adams (pictured), chief executive of Purple, said he was concerned that the boycott would “frighten the living daylights” out of retailers who had been prepared to “put their head above the parapet” and support the Purple Tuesday campaign.

He said: “If I had hands, I would throw them up in the air.

Purple Tuesday was a “totally independent campaign initiative”, he said, which had received “not one penny” from DWP.

He said: “I am frustrated because I thought we had been absolutely clear that this is not government-led or involved or paid for in any shape or form.

“There is no agenda. This is absolutely about getting disabled people to be seen as customers and making sure that retailers are aware and understand how you can improve the shopping experience of disabled people.

“I would urge them to seriously rethink the boycott. I think it is counter-productive to what we are trying to achieve.”

He said there had “never been any conversations” about the sharing of CCTV footage and that “absolutely nothing” DWP had said had led him to believe that it would be using CCTV from the event as evidence to use against benefit claimants.

More than 80 per cent of Purple’s board are disabled people, and the organisation provides training for employers, and works with disabled people to find jobs, recruit personal assistants and manage their direct payments.

Adams said Purple Tuesday was “an initiative that has been crafted, created, coordinated and delivered by a disability organisation”.

He said Purple Tuesday was about awareness-raising on the day itself, but also about “what then happens for the following 365 days”, while a call had gone out to disabled people to describe their “good and bad” retail experiences.

He added: “I think it is incredibly important that society understands and sees disabled people as real valued people who have money to spend and who deserve by absolute default a right to a good customer experience.

“It is my view that if businesses improve their customer services, more disabled people will spend their money with them, and that will drive business to want to reflect in their workforce their consumer base.

“That is an approach that I am hoping will start to really make inroads into some of the inequality… on employment, education, well-being.

“I think it goes hand-in-hand with the work that we do to support disabled people on a day-to-day basis.”

DWP said that any claims that it would use CCTV footage from the event as evidence that disabled people were not eligible for certain benefits were “categorically untrue”.

A DWP spokeswoman said: “We have not provided funding to Purple but we have worked closely with them to facilitate Purple Tuesday and ensure it is a success.”

Sainsbury’s had refused to comment on the boycott call by 1pm today (Thursday), and also refused to say if it had ever shared CCTV footage with DWP to use as evidence to justify rejecting a benefit claim.

It also refused to promise that it would not share such footage from Purple Tuesday with DWP.

An intu spokesman said: “Purple is one of many different organisations we work with in order to identify new ways to improve our physical spaces, customer service and employee support, so that we can ensure intu shopping centres are accessible destinations for all.

“We are unaware of any links between Purple Tuesday and the DWP and we think it would be a shame if the event is boycotted because of the valuable insight and awareness it is creating for this important cause.

“Like other organisations, intu is governed by current legislation which means that we would only share CCTV footage with individuals and public authorities in line with GDPR [data protection] requirements and under the Regulation of Investigatory Powers Act 2000.

“These requests are always fully scrutinised in line with current legislation.”

But he refused to pledge that intu would not pass CCTV footage from Purple Tuesday to DWP.

An M&S spokeswoman said the retailer had “never shared CCTV footage with the DWP to use as evidence to justify rejecting a benefit claim”.

She added: “As we don’t share footage with the DWP, we won’t do it on Purple Tuesday.”

She said: “Purple Tuesday is a great opportunity to increase awareness and understanding of the challenges our disabled customers face so that we can improve the shopping experience for them.

“The accessibility of our stores and website is extremely important to us and we’re delighted to support it.”

A Landsec spokeswoman said the company “would not share any CCTV with the DWP, unless we were served with a court order to do so”.

She added: “Landsec is committed to making its retail destinations as accessible as possible, for the sole reason that we believe in creating spaces which everyone is able to enjoy equally.

“While we recognise that, for the retail industry, Purple Tuesday is a move in the right direction, rather than a complete solution, we’re pleased to be able to raise awareness of the importance of disability access.”