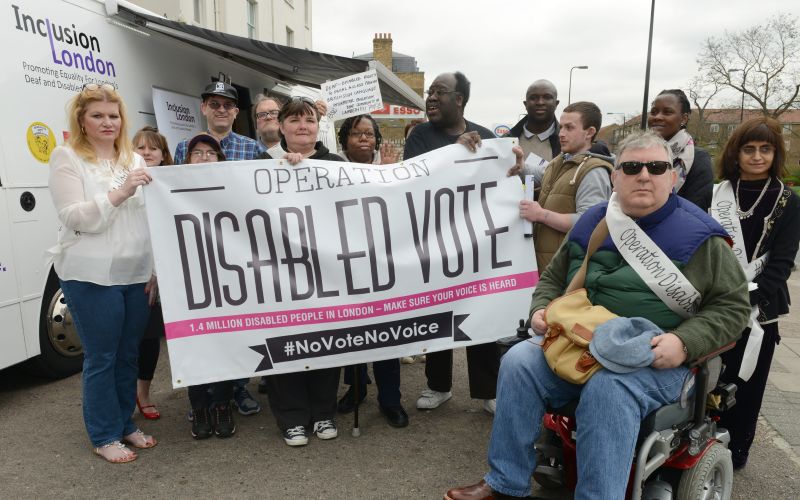 A five-day bus tour across London has helped raise the profile of disabled people’s potential voting power in next month’s general election.

Operation Disabled Vote is based on the principle that “disabled people have a right to equality in every area of life including democratic engagement”, and that “what matters to disabled people is important and that we need to demand that politicians listen to the voices and choices of disabled people”.

The idea was to promote voter registration, support and advise those who have faced new online barriers in the move to individual electoral registration, and explain to Deaf and disabled people why they should vote in the election and how they could do so.

During the five days of the bus tour, to 11 different locations across London, the Operation Disabled Vote team launched two new publications, one summarising the disability policies of the main parties, the other describing disabled people’s voting rights, including their right to adjustments when turning up to vote at a polling station.

Ellen Clifford, campaigns and communications officer for Inclusion London, who organised the week-long event, said the visits had helped disabled people in each area engage with the wider community.

For some of the groups, the event also helped them build contacts with local media.

And she said she was particularly pleased with the involvement of London’s Deaf community, including Lambeth Deaf Forum and Southwark Deaf Council.

She said: “The [Deaf] community really appreciate the efforts we have made to engage them. Political information is something they traditionally have not had access to.”

Another issue that emerged was the number of family carers who do not realise that their relatives with learning difficulties have a right to vote.

Over the five days, Operation Disabled Vote spoke to about 450 people, and directly registered 35 of them to vote.

Clifford said: “Most people were already registered to vote but the issue was that they didn’t see the point or they didn’t know who to vote for because they thought everyone was as bad as everyone else.

“The danger was definitely that fewer people would vote because they were so cynical and disillusioned, but I think there has been a lot of hard work over the last year on building an argument about why it is so important this time more than ever that people vote, including disabled people.”

She added: “It’s about the politicians seeing disabled people as voters. In order for them to listen to our issues, they need to see that we have voter power and our vote is often disregarded.

“We need to make the disabled vote more like the grey vote.”

Inclusion London has also been working with local Deaf and disabled people’s organisations on its Our Election 2 project, in partnership with The Alliance for Inclusive Education and Hammersmith and Fulham Coalition Against Cuts, to promote engagement in the 2015 general election and next year’s mayoral election.

Clifford said: “The response from those organisations has been really good. There has been a whole range of activities across London, including a number of hustings events.

“We have supported the local organisations with capacity to be able to undertake activities which in the main are not part of their funded work.”

This work, including Operation Disabled Vote, is set to pay dividends at the general election on 7 May, she believes.

The battle has not been so much about people not being registered, or being put off by inaccessible polling stations – as most disabled people know they can use a postal vote – but about not knowing who to vote for.

Clifford said she was “encouraged” by the Operation Disabled Vote week, particularly by the interest shown in the campaign by non-disabled people.

She said: “People were saying, ‘Good on you, it’s really important what you’re doing,’ understanding about the impact of government policy on disabled people over the last few years and thinking it was a good thing we were making those issues much more visible.”

Members of the ODV team had already learned from the experience of being part of the Daily Mirror’s No Vote No Voice voter registration national bus tour that took place in March, and was carried out alongside the organisations Hope Not Hate, Operation Black Vote and the union Unite.

Clifford said that educating the No Vote No Voice team about disability equality and access had proved “challenging at times, but very worthwhile”.