Disabled activists have been barred from standing as job-share candidates in at least two constituencies in next month’s general election.

At least three serious attempts – two involving disabled people – have been made to persuade officials that two or more people should be allowed to stand together for election to represent a single parliamentary constituency.

But all three attempts have been rebuffed, two by the acting returning officers and one by the Electoral Commission.

Disabled activists believe that allowing job-sharing MPs would lead to an increase in the number of disabled people and women represented in parliament.

Both the Greens and the Liberal Democrats have endorsed the idea of allowing MPs to job-share, and the Lib Dems have included it in their election manifesto.

The Greens say it is still party policy to introduce job-sharing and that it is covered by its manifesto pledge to “work vigorously” towards ensuring all levels of government and public bodies are “representative of the diversity of the populations for whom they work”.

Legal advice from a leading human rights barrister, commissioned by the Equality and Human Rights Commission, has suggested that the Electoral Commission could be breaching both the Equality Act and the Human Rights Act by refusing to provide guidance permitting job-share MPs.

In the Hackney North and Stoke Newington constituency in north London, disabled activist Adam Lotun (pictured) had hoped to stand with student Zion Zakari as a job-sharing independent candidate.

They approached the Electoral Commission, but Adrian Green, the commission’s regional manager, told Lotun in an email: “Our view is that the law does not allow two or more candidates to stand jointly for election as an MP.”

Green said that the Parliamentary Constituencies Act and the Representation of the People Act were both “written in such a way as to anticipate single candidates for elections to parliamentary constituencies”.

And he suggested that Lotun raise the issue with the Cabinet Office if he believed the law should change.

Despite the advice, Lotun and Zakari approached the Hackney North and Stoke Newington acting returning officer, but were told that they could not be nominated together.

Now they are taking legal advice and considering court action against the Electoral Commission.

Lotun said: “I was disappointed. It just shows that the system is flawed.

“The rules and regulations, if you apply common sense, would suggest there is no reason why people cannot stand on a job share basis at all.”

He said there was no need for new legislation, just fresh guidance from the Electoral Commission, taking account of what the Equality Act says on discrimination against disabled people and other equality groups.

Lotun said he wanted to job-share the role because he could not commit the necessary time, as a disabled father of a young family, to be a full-time MP.

He said there was significant support for job-sharing MPs within the Labour party, as well as the public positions already taken by the Greens and Liberal Democrats.

In Basingstoke, the disabled Green party activist Clare Phipps was hoping to stand with fellow party member Sarah Cope, but they were told their nomination was invalid.

The constituency’s acting returning officer, Karen Brimacombe, said: “One nomination paper containing two names was rejected as it wasn’t valid under the Representation of the People Act rules.

“As acting returning officer, I have no discretion over the application of these rules.”

But Phipps and Cope insist that there are no laws or rules preventing joint candidature.

Neither Phipps nor Cope would be able to serve as a full-time MP. Cope is the main carer for two young children, and Phipps has an impairment that prevents her working full-time.

Phipps, who job-shares a position on the Green party executive, said: “It’s time our government reflected the people it is representing. Allowing job-share MPs is just one way we can change politics for the better.”

Allowing job-share MPs has been Green party policy since 2012.

In a third case, Rachel Ling and Emma Rome were prevented by the acting returning officer in Weston-super-Mare, Somerset, from standing as job-sharing independent candidates.

Deborah King, co-founder of Disability Politics UK, said: “These cases show that the issue of job-sharing for MPs will not just go away.

“Over 45 individuals and organisations supported our campaign letter in the Guardian in 2012.

“Since then, more people have supported the campaign and [Labour MP] John McDonnell has introduced a private members’ bill to get job-sharing for MPs introduced.

“We would urge all political parties in the general election to support job-sharing for MPs as a way of getting more disabled people and more carers into politics.

“The House of Commons is not representative of the electorate. That is why it sometimes makes really bad decisions.

“We need a Commons fit for the 21st century and enabling part-time MPs is one way of achieving that goal.”

An Electoral Commission spokeswoman said: “Our view is that electoral law does not allow the nomination of two or more candidates for one constituency seat at a UK parliamentary election.”

She said that section 1(1) of the Parliamentary Constituencies Act 1986 refers to each constituency “returning a single member”.

She added: “Any changes in this area would require amendments to primary legislation. This would be a matter for government and, ultimately, parliament.

“We would suggest that any individual who wished to pursue further questions on policy or legislation in this area contact the Cabinet Office, which is the UK government department responsible for UK electoral law.” 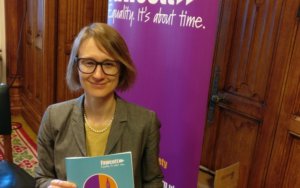