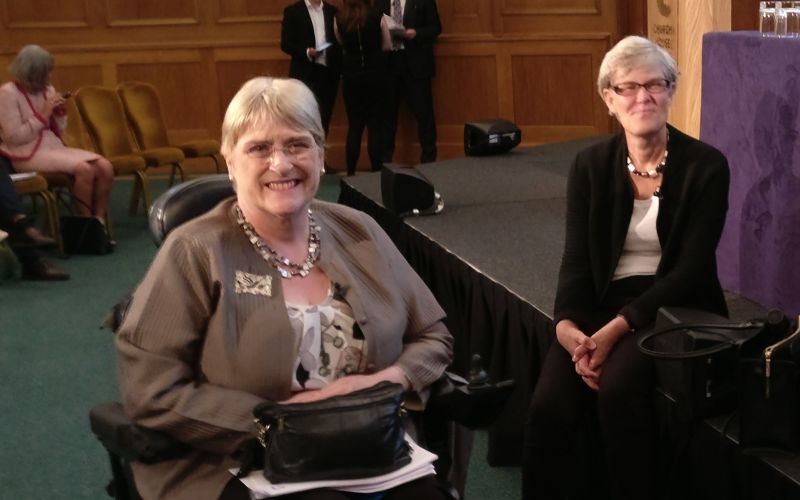 The Liberal Democrats have pledged that they would incorporate the UN disability convention into UK law.

Although the policy – which would give disabled people in the UK a wave of new rights in law – was not part of the Liberal Democrat election manifesto, Disability News Service (DNS) has been told that it would be part of any programme of government.

The party’s disabled president, Baroness [Sal] Brinton, told DNS that the Liberal Democrats in government would give disabled people in the UK the right to take legal action to enforce all of the articles contained in the UN Convention on the Rights of Persons with Disabilities.

Labour has made a similar pledge.

This would give disabled people legally-enforceable rights to independent living (article 19), to accessibility (article nine), to an adequate standard of living and social protection (article 28), and across many other areas.

She said such a move could help cases such as a Deaf child she knew of who had previously had an expert, level six British Sign Language (BSL) interpreter at school and was now having to cope with a level one or two interpreter.

Baroness Brinton (pictured, left, before the hustings) said: “That’s a breach of their rights. It’s like asking someone with GCSE French to translate at a police interview for somebody. It just will not do.”

She told the event that the UN convention “has to be the UK’s starting point”.

She said the party regretted the government’s removal of the Equality and Human Rights Commission’s disability commissioner – revealed by DNS last month – and its disability committee, and would want them reinstated.

She also confirmed another DNS story, that a Liberal Democrat government would scrap all benefit sanctions, a position which outflanks Labour, which has only promised to scrap the current “punitive sanctions regime”.

Baroness Brinton also criticised the Conservative decision to close the Access to Elected Office Fund, which helped disabled people with their extra costs in seeking election as councillors and MPs, and which has particularly hit Deaf people who use BSL interpreters.

She said: “I have a close friend who has been unable to stand this time because he has not been able to get support from that fund.

“The House of Commons is not representative of the country as a whole.”

She told the event: “A range of cuts have particularly hit disabled people the hardest and we would turn around those cuts and invest back in services for disabled people because as a party we believe in the individual’s right to perform the best they can in society and we feel the current cuts have taken that right away from people with disabilities.”

She added: “One of the major problems we have in this country for those of us with disabilities is getting around, it’s finding housing, it’s being able to walk through our town centres easily, access shops, retail… the government has a very clear role in helping to reduce those barriers, by legislation if necessary.”

But she said the government had chosen not to follow the recommendations of the House of Lords Equality Act 2010 and disability committee, of which she was a member, which had made a series of recommendations in this area.