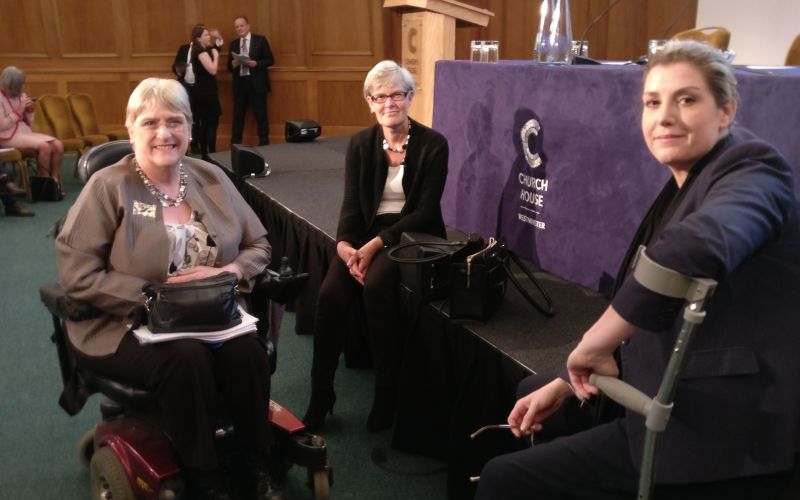 The Conservatives have refused to comment on an apparently misleading public pledge by the minister for disabled people that another Tory government would “dismantle” the work capability assessment.

Asked by a representative of the sight loss charity Thomas Pocklington Trust how to reform the benefits system so that it no longer required disabled people to “pay for their benefits with their dignity”, she said a Conservative government would “legislate to reform the work capability assessment” which “treats people like they are part of a sausage factory”.

She then added: “We have managed to get into the manifesto a legislative commitment to dismantle the work capability assessment.”

But there is no mention of the WCA in the party’s general election manifesto, or of “dismantling” it, and it pledges only that the Tories will continue targeting benefits “at those who need it most”, and to provide claimants of out-of-work disability benefits with “personalised and tailored employment support”.

And last October’s work, health and disability green paper included no pledge to “dismantle” or scrap the assessment process but only to try to improve it, and suggested the WCA might in the future be used only to decide entitlement to financial support, with a separate process allocating employment support.

Mordaunt (pictured, right) was the only one of the three party representatives – she was joined by Labour’s Kate Green (centre) and the Liberal Democrats’ disabled president Baroness [Sal] Brinton (left) – who refused afterwards to be interviewed by Disability News Service (see separate stories).

A Conservative party official who accompanied Mordaunt to Tuesday’s event promised that she would answer questions instead by email, but she had failed to respond to any of those questions by noon today (Thursday).

Both Labour and the Liberal Democrats promise in their manifestos to scrap the WCA.

Another audience member, from the mental health charity Rethink, said she had found the WCA process “awful” and “distressing” and that it had “made my [mental] illness much, much worse”, as had the assessment process for the other main disability benefit, personal independence payment (PIP).

Mordaunt said the government needed to involve professionals with expertise in particular health conditions in assessing claimants, while DWP needed to “look at working much more closely with healthcare”.

She had earlier admitted that there was “no group in society that is so discriminated against [as disabled people], whether it be the barriers of the environment, of attitudes, or the failings of the state”.

And she said a Conservative government needed to ensure that new homes that are built in both the private and social sectors are accessible.

She added: “We need greater accessibility to buildings, facilities, and we need real equality of experience.”

She said this would mean a review of regulations for licensing, building, planning and parking, and “regulators and also new ombudsmen” to protect the rights of disabled people.