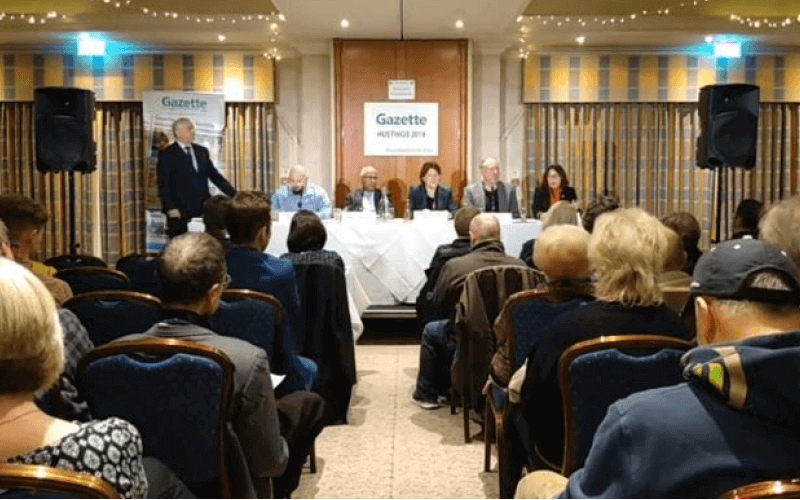 A former Tory minister for disabled people appears to have lied twice about the government’s disability living allowance reforms, in response to concerns raised by her Labour opponent in an election hustings event.

Maria Miller was minister for disabled people between May 2010 and September 2012, and steered through the early stages of the controversial replacement of working-age disability living allowance (DLA) with personal independence payment (PIP). PIP was eventually introduced in April 2013.

On Monday evening, Miller (pictured, centre) came up against her Labour opponent, Kerena Marchant, in a hustings event organised by the Basingstoke Gazette.

Marchant told the audience (after about 44 minutes) that the government’s introduction of PIP had led to tighter eligibility, so that disabled people who could walk more than 20 metres were no longer eligible for the upper rate of the mobility part of the benefit, compared with the limit of 50 metres under DLA.

Marchant (pictured, right) , who had been answering a question about the revitalisation of local shopping centres, spoke of how Miller was one of the ministers responsible for introducing PIP.

Marchant said: “Maria Miller was one of the ministers for disabled people who changed DLA to PIP, and when you transfer to PIP if you can walk more than 20 metres you lose your Motability vehicle.

“And now 80,000 disabled people have lost their Motability vehicle* and now no longer can go to places like the top of town [a local shopping area in the centre of Basingstoke].”

But Miller claimed in response that Marchant was wrong and that the higher rate of mobility for DLA “was actually designed for people who couldn’t walk”.

This is not correct.

Disabled people could be eligible for the DLA upper mobility rate if they could only walk a short distance – less than 50 metres – without severe discomfort. It was not only for those who could not walk at all.

But Miller then also claimed that DLA had been the “biggest benefit in the department” when she was minister for disabled people.

This also is not correct.

The biggest Department for Work and Pensions benefit at the time was housing benefit, for which spending was nearly twice as high as for DLA.

Miller, who told the audience that she was “really proud” to have been minister for disabled people, also claimed that it had been civil servants who asked ministers to reform DLA, a claim that does not appear to have been made publicly before.

In her introduction to the government’s consultation on DLA reform in 2010 (PDF), Miller made no mention of civil servants asking for the benefit to be reformed, stressing instead that she believed herself that “the time is right to reform DLA”.

Earlier that year, chancellor George Osborne had announced that the government would cut the 1.8 million working-age people claiming DLA – as well as spending on working-age DLA claimants – by 20 per cent by 2016.

After the hustings event, Marchant told Disability News Service: “I was really shocked by Maria Miller’s response about DLA and her erroneous understanding that the higher mobility component of DLA was awarded for people who couldn’t walk at all.

“It’s worrying that she was the minister for disabled people who was responsible for changing the benefit to another, but didn’t understand the benefit.”

She added: “People’s lives have been ruined due to this decision, they have lost their independence and their ability to go out of their homes to work, to visit town centres for leisure. They have become prisoners in their own home.”

She said: “I can remember challenging Miller about the scrapping of DLA and her glib response was that people were always frightened of change.

“She made it quite clear that the aim of the changes was to remove 20 per cent of claimants from entitlement to PIP and at the time was saying that disabled people didn’t need to bathe every day.

“To now make these totally inaccurate statements and try to blame civil servants for her cruel actions simply shows what an outright liar she is.”

Neither Miller nor the Conservative party had responded to requests for a comment by noon today (Thursday).

*The latest figures, obtained by Disability News Service this week (see separate story), show there are now more than 100,000 Motability customers who have had to return their vehicles as a result of the PIP reassessment process since 2013